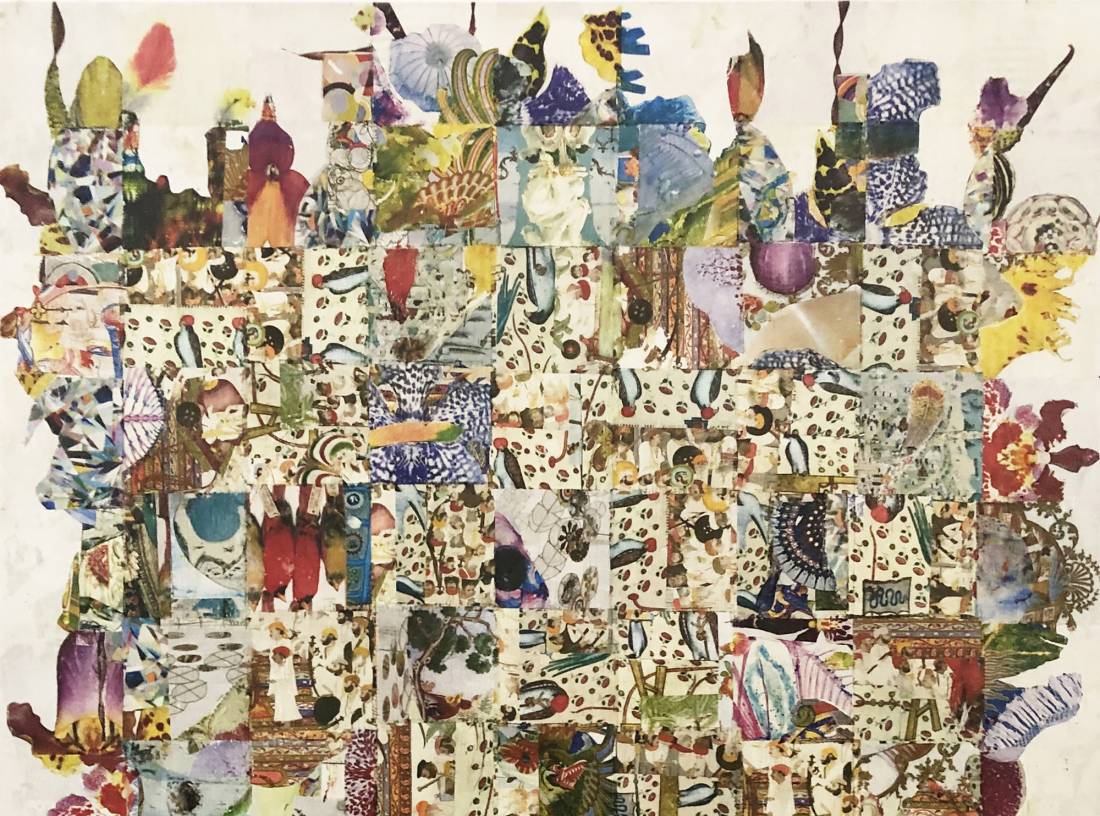 The title of this exhibition, which refers to the 1967 song by The Turtles, was one of the first things I thought of when thinking about the art in this exhibition. That feeling that an artist reaches, at some point in the making of an art work, when the process and purpose of a work comes together and drives the artist to dig deep. For this exhibition, I have selected six artists: Joel Carreiro, Don Doe, Matthew Garrison, Yeon Jin Kim, Margaret Roleke and Cecilia Whittaker-Doe, who reveal both new and traditional ways of expressing great depth of vision while creating compelling, topical, beautiful and at times humorous works.

Joel Carreiro, who uses either classic collage methods or multiple image transfer, commingles various art ages and types with stunning results. With his transfers, Carreiro weaves wondrous visual transitions that ebb and flow, forming waves of optical transitions. Patterns develop, rhythm is created, and an overall composition becomes focused on referential glimpses and color connections. In his collage series, Carreiro combines a portrait painted by Picasso with an iconic offering from another notable Modern artist suggesting a humorous take on greatness, while the overall effect creates a compelling aesthetic conversation.

Another collector of elements is Yeon Jin Kim, as she updates the traditional Korean art process jogakbos, which is the creation of wrapping cloths from pieces of various fabrics, by using a variety of modern day plastics in place of fabric. In doing so, Kim switches indications of a once male dominated society that insisted on women being frugal, to focus on our big business dominated world of profit and ubiquitous waste. This contrast is both stunning and beautiful, as it sheds light on the fact that no matter how much things change, they in some way stay the same.

Don Doe falls into the multidimensional zone, where collages largely from fashion magazines and ‘mens’ periodicals result in oddly sexual, powerful, simultaneous juxtapositions of euphoria and despair. Having little concern for lining things up anatomically, Doe suggests a nod to the divergent imagery found in film montage, while the clarity in the contrasting bodily forms makes them appear more psychedelic or dreamy. Given all this, Doe manages to create a narrative that represents much of what both excites and represses.

Cecilia Whittaker-Doe brings us something of a kaleidoscopic view of a landscape. By combining multiple perspectives and stylistic approaches on one common surface, Whittaker-Doe leads us down a trail of wisdom and wonder. What really draws the attention of the viewer is her unique interpretation of ‘natural’ color, and how various elements seem to trade hues with adjacent forms. It’s all a puzzle waiting to be solved, or not, as the journey is the message.

Matthew Garrison is known for his experimental approach to media. Using video, photography, paint, found materials, Garrison brings to mind the art movement Arte Povera, with influences more coming from the home computer age than the ‘poor object’ or his predecessors. By employing references to the banal or the everyday, Garrison reintroduces popular culture as near venerable, while his sense of humor tends to guide us into the deeper meaning of his work and the odd possibilities that lie ahead.

Margaret Roleke gathers contentious objects to make potent political statements in her desire to prompt positive change. Women’s rights, gun reform, cultural and racial oppression all seem to have some overlap in her prolific, spent cartridge series of sculptures and wall hangings. Which, when displayed in a gallery or museum setting become optical plays on gesture and form. In the end, we are confronted with sheer numbers, of scary symbols all too abundant that have become a sad defining reality.

Other events from Don Dominick Lombardi