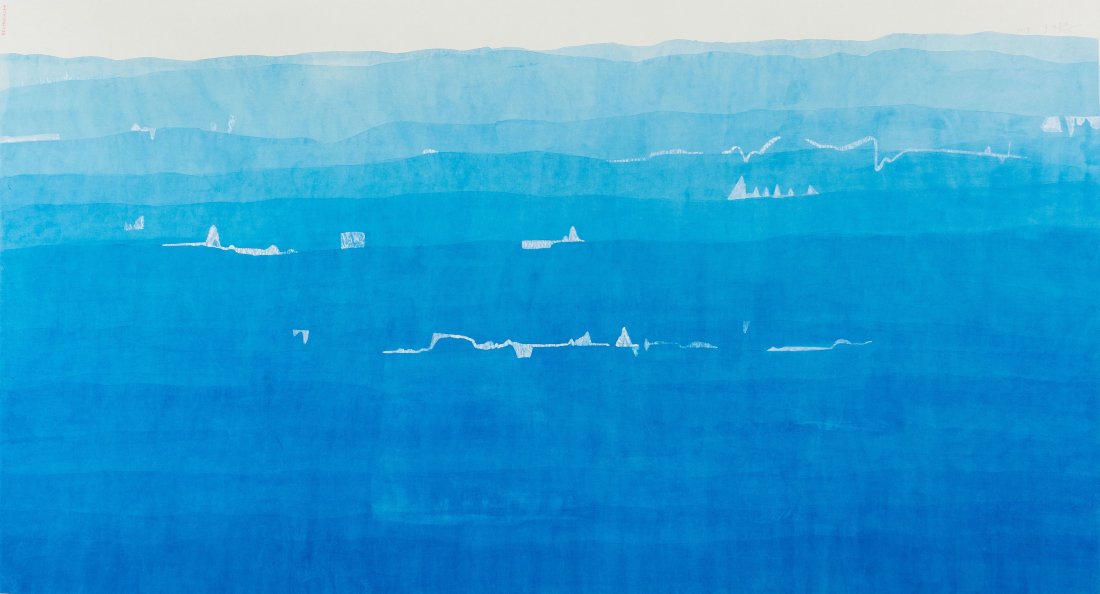 Chambers Fine Art is pleased to announce the opening on November 17, 2018 of Wang Gongyi: Winsor Blue. This will be the artist’s first solo exhibition in New York. Wang Gongyi was born in Tianjin, China in 1946. She received her master’s degree from the Department of Printmaking at the Zhejiang Academy of Fine Art in 1980, and stayed on to teach after graduation. In 1986, she made her first trip abroad when she was invited by the French Ministry of Culture to study art and art education, and 1992 she went to Aix-en-Provence and Lyon to learn the technique of lithography. After periods as artist-in-residence at the Museum of Oregon State University and the Pacific Northwest College of Art, she moved permanently to the US in 2001 and is now based in Portland.

In the early 1980s, Wang Gongyi gained wide recognition in China after being awarded first prize in the second ‘National Youth Fine Art Exhibition’ for her powerful suite of seven woodcuts devoted to the Chinese feminist and revolutionary martyr Qiu Jin. She has described how in her careful planning and research for this project, she even spent several days living in Qiu Jin’s house. The invitation a few years later by the French Ministry of Culture made her one of the first female artists to study abroad in the 1980s. While the period she spent in France greatly broadened her horizons, it also made her realize how little she knew of Chinese culture. When French professors and artists questioned her about it, she was unable to respond. “On the way home via Hong Kong,” she recounted, “I bought several Chinese classics, Laozhi and Zuangzhi as well as the Book of Changes. Paradoxically, a trip in quest of new things turned out to be an urgent homecoming to my own culture and tradition.”

This belated exposure to the wealth of Chinese culture that had been forced to lead an underground existence during the political upheavals of post-Revolutionary China resulted in a remarkable expansion of her means of expression during the next decade. The daily practice of meditation that became an important aspect of her life during the years between 1989 and 2003 was accompanied by a broadening of her means of expression that now included not only calligraphy and ink painting but also installations such as Listen, Look, Taste, Smell, But Do Not Ask (1993) and Rhythm (1994), that she has described as “a way to compare the aesthetical rhythm in the act of making an art work with the movement of mountains, waves, and other natural phenomena. They were similar in the cyclical and rhythmical movements, the endless repetition and variation.”

With the abrupt cessation of her daily meditation practice in 2003, inspired by an enlightened master who, she has recounted, “swept away my last cobwebs,” Wang Gongyi broke free from many physical and mental restraints. With the ambition, anger and grief of her youthful years gradually melting away, she gained a new sense of freedom and worked in a wide variety of media and styles. The current exhibition is devoted to two aspects of her work, a survey of her practice as a print-maker between 1992 and 2002, the medium through which she first gained recognition, and a series of watercolors executed in multiple gradations of a distinctive shade of blue.

In 2005, her first use of Winsor Blue watercolor was a revelation. Speaking of her love for the color in 2009, she noted that “I love the color blue. It delights me. The unique watercolor “Winsor Blue” manufactured by Winsor & Newton Co., is brilliantly alive on the Chinese Xuan paper – clean, transparent, and lovely. The subtle and delicate lines born out of the margins of two overlapping strokes are overwhelmingly beautiful. The color moves like melodious musical notations. It pulsates: diastolic and systolic, inhaling and exhaling. It reveals the evocative traces of mountains, the skies, the water, the air. It is unconditional love.”

A recent work, Melisma (2018), painted on Chan-Yi (cicada wings) Xuan paper is light and delicate, with fine shining dots resembling flapping cicada’s wings in sunlight. Since the artist uses Xuan paper, it is crucial to control the use of water, and the colors have to be applied slowly and evenly. After drying, gelatin in the watercolor pigments “piles up” a thin line at the edge. Although this is taboo in the traditional style of Chinese painting known as Gongbi, Wang Gongyi utilizes the effect to create depth and movement in her Winsor Blue series. After one layer is dry, a second coat is added to produce another thin line. Layer upon layer, the color changes from deep blue at the bottom to light blue at the top, forming a rhythm of repetitions and gradations. The open and extended parallel lines of Melisma resemble distant mountains, waves, clouds, marks in sand, and soothing airflows. The white patterns on the surface that resemble birds, fish, sails, and musical notes were inspired by a lithograph of ancient musical scores that Wang Gongyi encountered in France.

For more information, please contact the gallery at 212-414-1169 or cfa@chambersfineart.com.