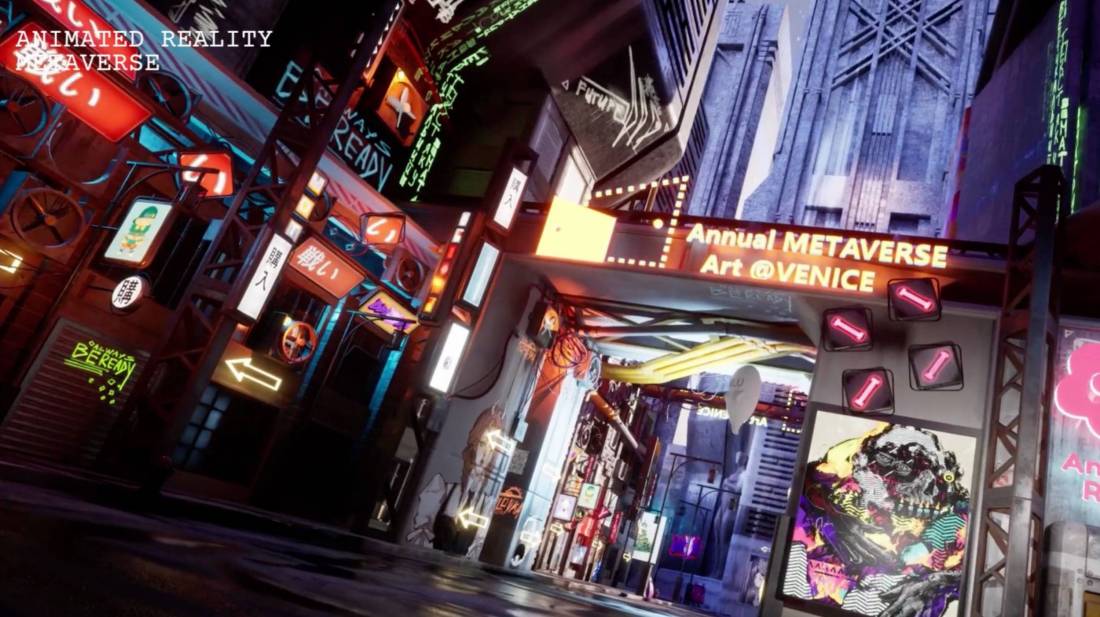 "The 1st Annual METAVERSE Art @VENICE", the exhibition conceived by Victoria Lu, one of the most famous female art critic and curator of the Chinese artistic world, with the virtual singer Autumn and the Artist CryptoZR, hosted at the Spazio Thetis in Venice at the Arsenale Nord, consists of two sections: the collective exhibition gEnki, and the personal exhibition "CryptoZR: COOKIE COOKIE 2.0" curated by Li Zhenhua.

gEnki, is an interactive exhibition that exploits the potential of the internet and virtual reality, and interacts in real time with every part of the world from Venice. It offers a new model of "decentralized autonomous curatorship", exploring various innovative and always different exhibition methods and will continue in the future in the cloud version, through a web platform.

Although this is not a completely virtual cloud-based exhibition, it is nonetheless founded on an interactive virtual-real interaction model. During the seven months of the exhibition, the number of artists present both online and offline will reach over 300 and there will be events between different artists in connection on the cloud.

The exhibition project aims to involve Generation Z, or Generation of the Internet, i.e. all those who were born between 1995 and 2009 and who have been influenced since birth by technology, also known as "Digital Indigenous".

Users through virtual life on the Net can overcome the limits of physical space, crossing the barrier between brain cognition, mental imagination and the real world. It is the so-called "METAVERSE" that has become a hot topic not only among creatives but also among investors worldwide.

Genki is an ancient philosophical concept in China and Japan, which refers to the origin of the world, and represents the vital energy that generates everything, justifying the phenomena of formation, development, change and end. Being Genki is about giving your best and connecting with people in a positive way. Genki's study refers to the human perception of nature and the world, can it therefore help to understand the link between the physical world and the virtual world? Can various modes of immersive interaction between people, things and the environment in the Metaverse create value and suggest an interpretation of the meaning of existence?

The Metaverse develops in the digital world, its material in fact consists of data and information and is the result of various technological elements including video, virtual reality and augmented reality, but it is also in close correlation with the physical universe, as it shares the same space-time structure. The Metaverse is accessed via some devices such as computers or smartphones, an internet connection and, to make the experience more immersive, even with augmented reality viewers. Users in the Metaverse can live virtual experiences, create realistic avatars, meet other users, create objects, participate in digital events, such as conferences or concerts.

The avatar transports what we want to represent into a new dimension, fueling a reflection on the theme of identity in another reality that is not only digital, but also global.

The metaverse will be the reference for carrying out experiments in cross cooperation, technological enhancement, openness and tolerance, equality and freedom, taking care of the future, protecting the environment, embracing the whole world, stimulating intellectual interactions and the imagination.

Selfish and racist discrimination rages in today's world, while gEnki wants to indicate a change, a new model of mutual help and sharing in which an art without borders of nationality, gender or age through beauty can give hope.

The artists of gEnki declare themselves as a group of new human beings willing to exist in the parallel universe of the Metaverse through virtual imagination and outside physical space.

gEnki is a research path developed jointly by professors, students and artists from universities from different parts of the world, led by the IUAV University of Venice and the Doctoral School of History of the Arts of the Cà Foscari University of Venice. Companies such as Qingdao Wanmei Shengshi Technology Information Co., Ltd. and Huahan International Culture Development Company participated with the scientific / organizational committee formed by Angelo Maggi, Fei Jun, Xue Lei, Popil and Chen Xu; The curatorship is by Prof. Angelo Maggi, Vice Rector for International Relations at the IUAV University of Venice and by the PhD student and curator Sen Fu. Rick Juang is the technical curator.

The future has arrived, let's fly beyond the future!

During the period of the Biennale Arte, inside the fascinating XVI century buildings of Spazio Thetis at the Venice Arsenale, the innovative exhibition project gEnki presents a path of digital installations and web performances on immersive LED screens that winds between two pavilions, Lamierini and Tesa 106, where projects by single individuals alternate with choral projects by numerous artists, characterized by the typical shared view of the Metaverse.

It is rather difficult to select a few among the projects focused on current themes and even philosophical ones in some cases, such as the dialogue between impermanence and digital immortality, gender fluidity, (Theirs Series) the conflict between tradition and pacifiable technology in the Metaverse (Odyssey in the Metaverse and Cosmo NFT Chamber), visions of new models of civilization based on recycling and sustainability (ONE TON PROJECT). Many artists focused their work on NFT art, created through the daily collection and discussion of real-world news, with a clear goal to record all the things that could shape the development of human society (Bug History).

Fei Jun, an artist who participated also in the 2019 edition of the Biennale Arte at the China National Pavilion, is a lecturer in various academies of art and technology between New York and China. In the last few years, he created an original project called EmoLog. It is a series of image logs generated from the artist’s daily emotional data, which may come from a street encounter, a moment of inexplicable melancholy, or may be influenced by various events around him, whether it is panic about the COVID-19 or disappointment about the US election; these meaningless emotional data are “objectively” collected by the artist using heart rate collection devices. The data will bypass experience, upbringing and language, and finally penetrate directly into the body, giving birth to images without permission; this log is not subjective, nor necessarily objective; it appears virtual, but is inextricably entwined with each real day.

Artists like Popil, have contributed to the creation of the Metaverse. She is an independent cross-media illustrator and animator. As an artist, she possesses skills that run the gamut from sketching and painting to digital design, augmented reality, 3D mapping, and more. She curated the Animated Reality Gallery - Animated Reality Metaverse Exhibition project for gEnki, by bringing the Metaverse to the Venetian Arsenal from different artists’ points of view.

The exhibition set-up culminates with the original installation of a large 4x3 meter monitor positioned inside a pool for scientific experiments, currently empty and protected by a network, belonging to the marine engineering company, Thetis spa, which houses the exhibition. The screen reproduces a music video Born a Drum Queen by the artist A-DUO with drum dance scenes from which emerges the process that goes from the initial competition to the subsequent integration between traditional and contemporary dancers, creating a dialogue between culture classic and modern.

SUPPORTED AND PROMOTED BY

Other events from FG Comunicazione