Jonathan VanDyke: How to Operate in a Green Room 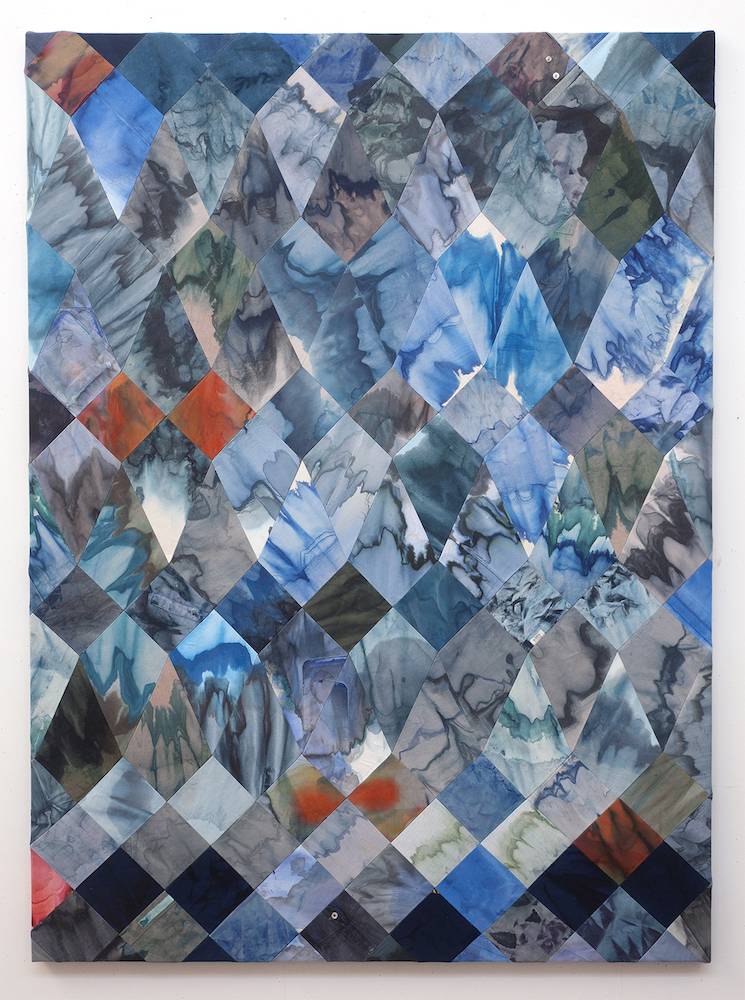 Luis De Jesus Los Angeles is very pleased to announce JONATHAN VANDYKE: How to Operate in a Green Room, his first solo exhibition with the gallery and his first in Los Angeles. The exhibition will be on view from July 23 through September 3, 2022. An opening reception will be held on Saturday, July 23rd, from 5:00 pm to 8:00 pm.

Jonathan VanDyke’s opulent sewn paintings fuse geometric pattern and expressive gesture. His works emerge through complex and prolonged processes of accumulating, mark-making, and piecing, often taking over a year to conceive and construct. Gathered from his family, friends, and companions, the fabrics that make up his paintings are stained and marked by way of techniques he first devised through long-term collaborations with performers from the NYC queer art community. Earlier sewn paintings – including a pair shown in the group exhibition The Road at the gallery in 2013 – revealed the traces of dancers who moved directly atop raw canvas, working through choreographies around themes such as submission and domination. During a long recovery from a major accident in 2017 – the artist broke both of his wrists – he undertook a period of deep research into historic craft practices. This resulted in a 2018 performance at The Columbus Museum: in the museum's rotunda he mounted 16 historic quilts from their collection, most of which had never been on public view, and stood and contemplated them in silence for 48 hours, honoring the labor of the anonymous women who made them. This sense of attentiveness and introspection, and an abiding interest in the life of objects, infuses VanDyke's new paintings, which he conceives of as meditative devices.

VanDyke has noted that the recovery period following his accident also gave him time to study and refine his use of color and to devise quieter, subtler, more intricate painted marks: "the sorts of marks I had never seen before, where I found myself letting the materials express their own qualities, rather than forcing my hand." While on first glance the works appear to comprise a single abstract surface, a close view reveals that they are made from hundreds of sewn pieces, and that he leaves details such as seams, buttons, and pockets intact. "Abstracting is not forgetting," the artist wrote in a letter accompanying his recent exhibition as Visual Artist in Residence for the Chelsea Music Festival in New York. "Clothing – the common objects of everyday life, infused with the movement and life of its wearers – comes into contact with a notion of abstraction as a state of transformation and an expression of sensuality and the sublime." In a work such as Bracing, denim and twill pants have been stained through slow pours and thin washes of paint, and then overdyed to create subtle transitions from blue-green to blue-black. Its pattern is drawn from a rug designed by Gertrud Arndt in 1924 for a Bauhaus administrative office. The painting Blue Pulse, made from linen, silk, and cotton dress shirts soaked in washes of paint and ink for weeks at a time, is backed in brightly dyed linen, some of it embroidered with flowers and birds. VanDyke views the paintings as having a public and a private side, so that when they are installed on a wall, they "hold part of themselves out of view."

For each exhibition, VanDyke designs display structures attuned to the site. Recent exhibitions, such as How to Operate in a Dark Room (1/9unsunonve, Rome, 2019) utilized rusted construction scaffolding as a display device, creating a sharp contrast between functional and minimalist materials and the softness of the paintings. These display structures consider the viewer’s experience, inviting them to walk around the paintings and fully contemplate the intricacies of each work. "The paintings might be performing for the viewer, or the viewer for the paintings," states VanDyke, an action alluded to in the exhibition title's reference to a green room. "I don't view the work of art as static, but as something that is constantly changing, that we are performing around and with." VanDyke's ideas around the performativity of painting are also evident in a series of photos of friends posed near his work, but with their faces hidden. "As if in a green room, they are preparing to perform, while asserting the right to be more complicated, more queer, more multi-faceted than meets the eye."

Inspired by the media fluidity of early twentieth century artists like Sonia Delauney and Sophie Taeuber-Arp, Jonathan VanDyke (b. Hershey, Pennsylvania) is a visual artist working at the intersection of painting and performance, with an emphasis on a queer, collaborative, and embodied practice. He studied at The Glasgow School of Art and the University of Glasgow as a Rotary Ambassadorial Fellow, the Skowhegan School, the Atlantic Center for the Arts, and received an MFA from the Milton Avery Graduate School of Bard College. His work has been included in solo and group exhibitions nationally and internationally including the Chelsea Music Festival, New York, NY; MassArt Doran Gallery, Boston, MA; Des Moines Art Center, Des Moines, IA; Nerman Art Museum, Overland Park, KS; Columbus Museum, Columbus, GA; Palazzo Fruscione, Salerno, Italy; Kleine Humboldt Galerie, Berlin, Germany; Abrons Art Center, New York, NY; among others. Recent solo performances and commissions have appeared at Storm King Art Center, New Windsor, NY; The Power Plant, Toronto, Canada; the National Academy Museum, New York, NY; and Albright-Knox Art Gallery, Buffalo, NY. His work has been reviewed and featured in several publications, including Art Forum, Art Papers, Modern Painters, The Philadelphia Inquirer, Time Out New York, T Magazine, Bomb, and Art Review, and Mia Le Journal. In the fall of 2022, he will join the undergraduate faculty of Bard College as an Artist in Residence in Studio Arts. VanDyke currently lives and works in New York, NY.

For further information, including images and previews, please call 213-395-0762, or email: gallery@luisdejesus.com.