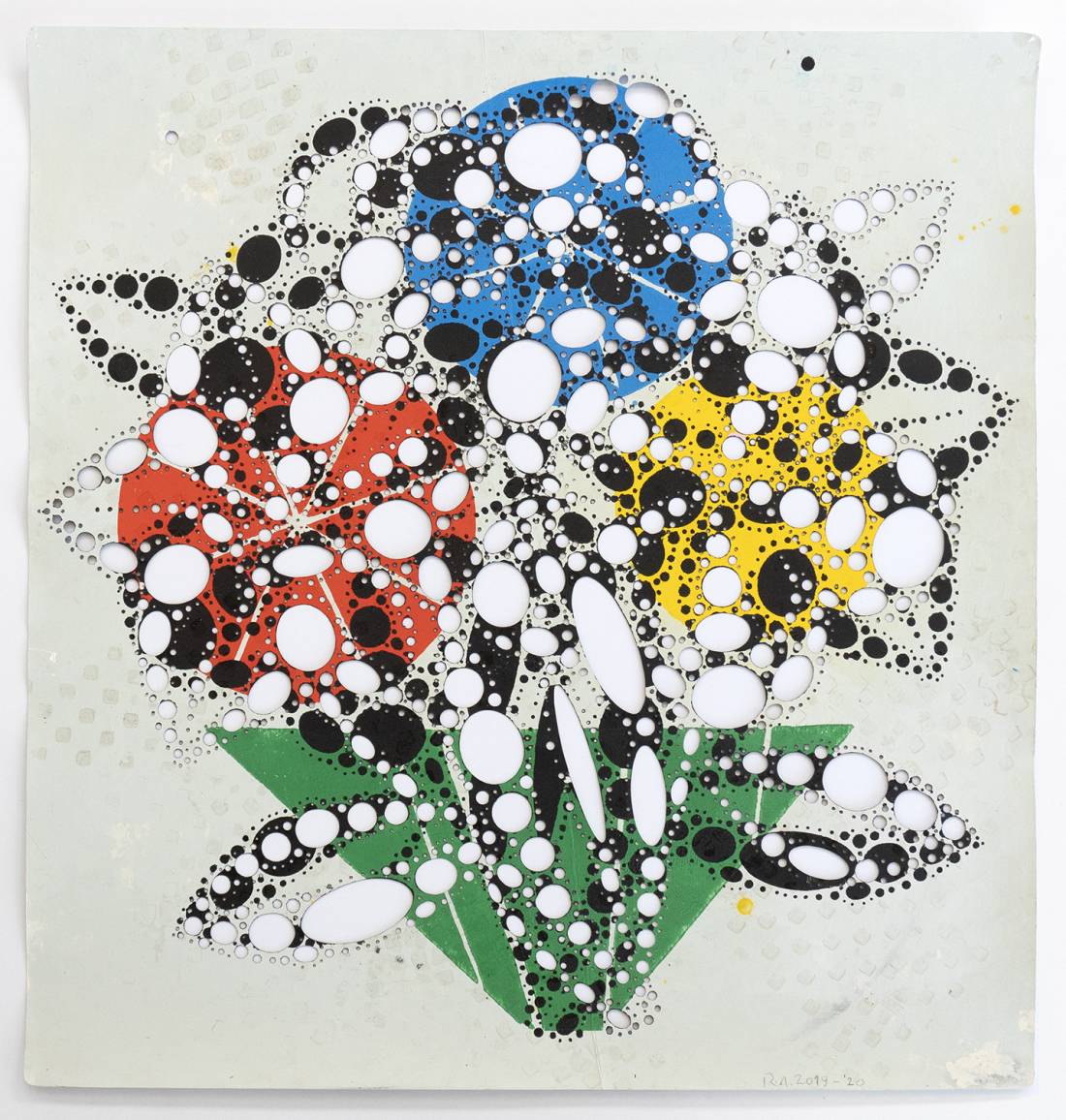 Gallery 16 is pleased to present its third solo exhibition with artist Reed Anderson. No Love Lost contains a new series of cut paper paintings by the Massachusetts based artist.

Anderson is known for obsessively layered cut paper paintings. He describes his process as "additive and self-generating". He begins his cut paintings by applying patches or bands of color onto paper before cutting oval and circular shaped holes, then folding the paper and further applying paint through the cut holes, later collaging additional elements onto the work. The resulting works are a sort of map of themselves. The hand-cut patterns and floral motifs are used as a stencil to further the painting's composition. When viewing these works with an understanding of how they are made, one becomes aware that the cut patchwork motifs in some paintings are loosely derived from the enlarged image of a typical rose tattoo at a local tattoo shop. Anderson prefers to allow the evidence of the making of the works – both the hand and the process – to remain. Throughout the making of these works they exist in constant flux, a dance between cutting, painting, and collaging.

In a review in Square Cylinder Julia Couzens wrote "Anderson draws upon a variety of sources. One body of work uses floral imagery to suggest bouquets or mandalas or muddied pieces of scherenschnitte, the Swiss folk art of paper cutting. I am also reminded of the late cut paper paintings of Irene Pijoan (1954-2004) who taught at the San Francisco Art Institute, and where Anderson received his undergraduate degree. Like Pijoan, Anderson offers generosity and respect for the power of formal craft. The flower pieces are unbridled odes to beauty and the ceremonial rituals of birth, death and achievement.

Reed Anderson was born in 1969 in New York, NY. He studied at both the Cleveland Institute of Art (where he studied painting with Julian Stanczak, a major influence in his creative practice) and the San Francisco Art Institute where he received a BFA in Printmaking. He also holds an MFA in Studio Art from Stanford University. Anderson has been exhibiting his work nationally and internationally for over 25 years. Anderson’s work is featured in numerous public and private collections, notably the Museum of Modern Art, NYC; the Albright-Knox Art Gallery; The West Collection, Philadelphia; The Olbricht Collection, Essen, Germany; and The Thyssen-Bornemisza Art Contemporary, Austria. Anderson currently lives and works in Great Barrington, MA where he and his family recently relocated after many years of living in New York City.