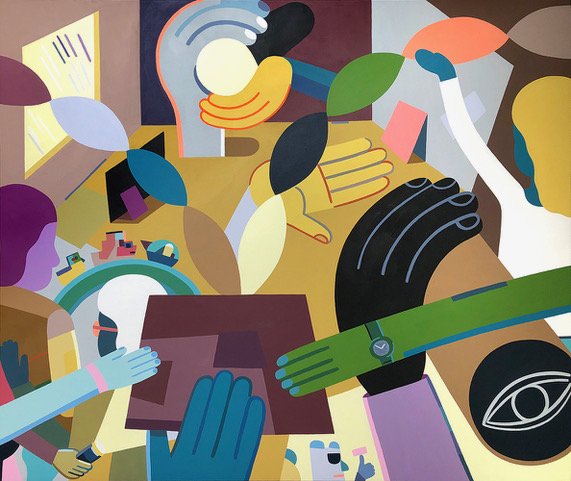 Gallery 16 is pleased to welcome artist Jason Jägel for his second solo exhibition with the gallery, La Machine Molle. Jägel presents a new series of paintings, works on paper and sculptures. There will be an opening reception for the artist on Friday, February 7th, from 6-9pm.

La Machine Molle is French for The Soft Machine, the title of a 1961 cut-up novel by American author William S. Burroughs, as well as the name of seminal Canterbury scene band, Soft Machine. After being kicked out of his own band (Soft Machine), Robert Wyatt started a new band which he named Matching Mole, a linguistic pun on the French name for Soft Machine. The images in a new series of paintings refer to the 1972 live performance of Wyatt’s group on the French television program Rockenstock. Jägel broad admiration for Wyatt includes his use of everyday speech, wry humor, and self-referential elements in his lyrics. There is a kinship in the way both Jägel and Wyatt bring together elements of improvisation and lyrical narrative.

In his own unique and poetic way, Jason Jägel's work cultivates a strong improvisational component, born out of a form of autobiographical fiction, his love of music, comics, and literary fiction. In the words of Kevin Killian, he is an “ace raconteur” and, above all, Jägel's work tells a story. His compositions often appear as fragments where experiences, dreams, people, places, individual narratives and past experiences intersect and intertwine to create open-ended, conversational stories full of rhythm and flow. No evident beginning, middle or end, the spectator zooms in and out of situations, decoding and perceiving along the way, searching for a route to try and interpret the often ambiguous signs and signals in order to create coherence.

The stylistic form of Jägel's spontaneous and improvisational painting is immediately recognizable. His paintings blend elements of abstract painting, comic flatness and linguistic expression into works that are dense, vibrant, and colorful. He has an impressive sense of rhythm, as well as a gift for surprising color synthesis. “I don’t want to see the colors in such a way that they foremost advertise their hue. I want to mix colors that foremost elicit an emotional response.” (JJ).

Jason Jägel (born in 1971 in Boston, MA and based in San Francisco) is a painter, educator, and commissioned public artist. He has been featured in numerous solo and group shows since 1995 including shows in New York, Tokyo, Copenhagen, Milan, Barcelona, Los Angeles, Seattle, New Orleans and more. His work uses the syntax of comics to conjure fictional worlds where anything can happen at anytime, like everyday life. “I want to create a place with its own inner life and see what happens,” says Jägel. He received an MFA from Stanford University in 2002. His work is included in many public collections including the Museum of Modern Art, New York, Hammer Museum, Los Angeles, and San Francisco Museum of Modern Art. Jägel has completed twelve commissioned public artworks in San Francisco, all in the context of transforming neighborhoods and innovative large-scale projects. His most recent commission is a 13x34 foot ceramic tile mosaic installed at San Francisco International Airport’s new Harvey Milk Terminal 1.