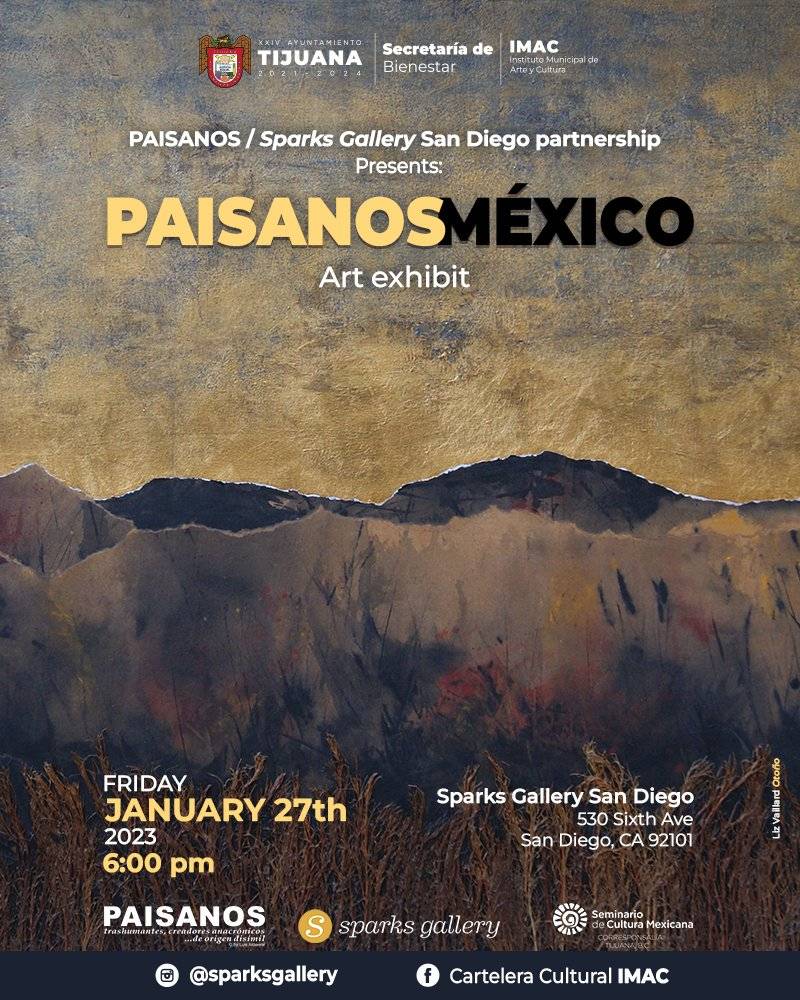 San Diego and Tijuana are geographically and historically sister cities, but in many ways today, they can seem worlds apart. Art and culture continue to bridge the physical boundary between the countries, fostering ongoing connections between creators and patrons in both regions. Paisanos, a project coordinated by the Instituto Municipal de Arte y Cultura de Tijuana, is dedicated to developing a formal discussion surrounding migration and movement, and has brought together a collection of two-dimensional artworks whose narratives are inspired by their creator’s proximity to the border and life between two countries. Sparks Gallery and the Instituto Municipal de Arte y Cultura de Tijuana are pleased to jointly present this collection in “Paisanos México,” opening January 2023 at Sparks Gallery  in downtown San Diego (530 Sixth Avenue).

Group Statement from the Paisanos Project:

This project attempts to construct –diagonally- the voice of the migrant individual through a multidimensional creative document: we-are-what-we-do while we-are-where-we-are. In this wandering collective of creators, each "responds" sincerely from their own creative self, in this way integrating, by inertia, a rhizome of raw emotions and mysterious notes on the theme of non-being; why? Because this is nationality; an indicator of something unknowable. Our "contemporary" world has codified a system of references and immediate associations in order to describe the ways of being according to geographic origin, topology and such. Absurd.

Understanding that life IS movement, we should condemn the concept and the moral construct of permanency. We should create a culture of change and transformation. Those who inhabit the cultural borders of our world have a deep emotional understanding that while the world was looking to find "form", it actually created prisons. This curatorial initiative-without-shape describes (as homage to liberty) the personal identity of those who find their country in movement and migration. Neither in nomadism nor in escape. Not in abandonment, nor in forgetting. Migrants are universal. Not in order to be everywhere: But to understand the universe, and inhabit it.

Other events from Sparks Gallery