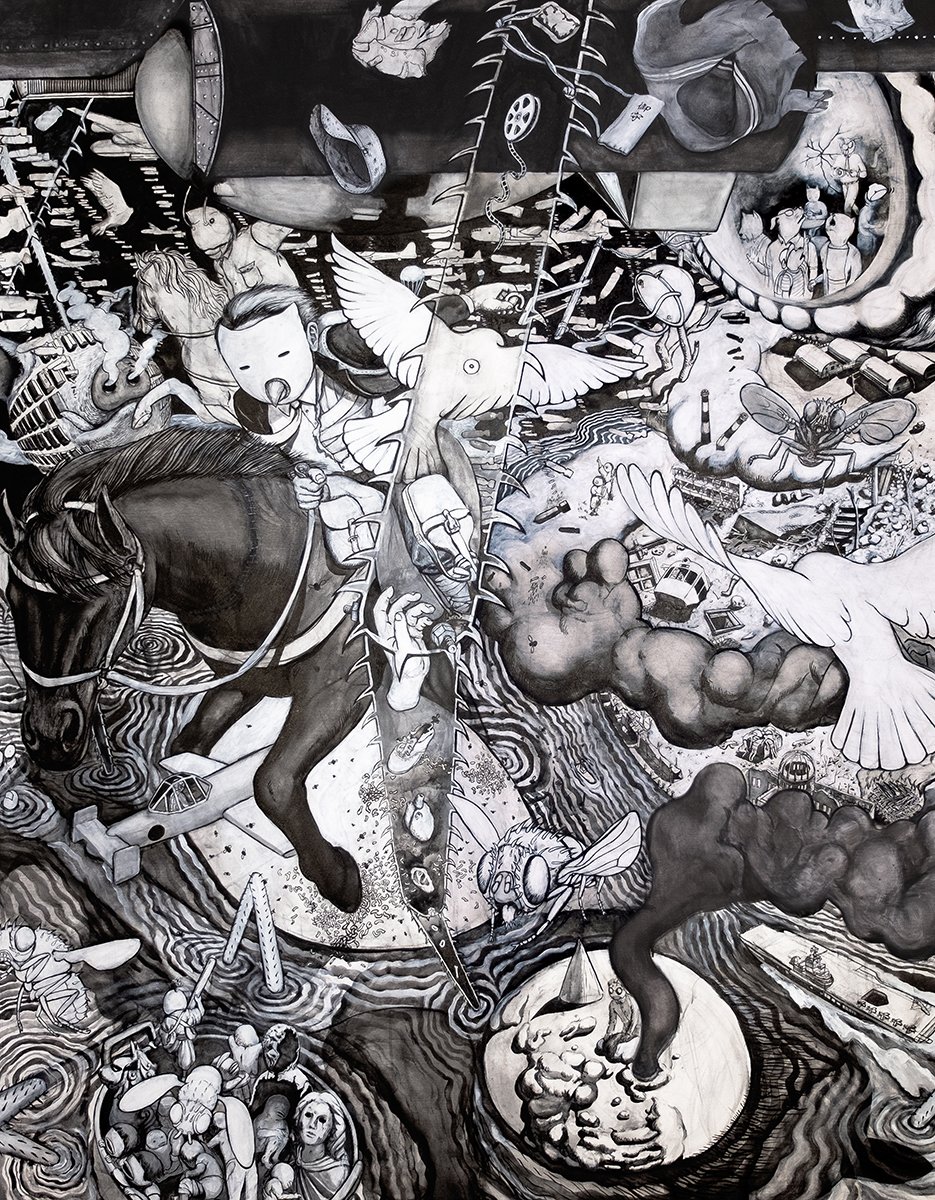 To reopen the gallery, Gaku Tsutaja and Ulterior will present two new large-scale paintings by Tsutaja at the gallery and, online, forty-seven "Daily Drawings"—one drawing a day posted on Instagram during the duration of the show. All the works were produced during the time of quarantine. The exhibition will be on view from June 24 through August 9, 2020, and the daily Instagram presentation will begin June 24, 2020 Japan time (June 23 in the US). To visit the gallery, please contact takako@ulteriorgallery.com to make an appointment. Walk-in visits are also welcome. As a safety precaution, the gallery will restrict admission to three visitors at a time.

Gaku Tsutaja has been researching the history surrounding the Manhattan Project and the nuclear impacts on Hiroshima and Nagasaki in order to create narrative-based works in multiple media, including painting, drawing, installation, and performance video. August 6th and 9th of this year will mark the 75th anniversary of the lives lost to the two atomic bombs, Little Boy and Fat Man. To mark this occasion, Tsutaja wished to exhibit two paintings that she has created based on recent research on Hiroshima, Nagasaki,  and sites linked to the development and deployment of the atomic bombs such as Hanford Site and Spokane in Washington, Los Alamos and Alamogordo in New Mexico, and Wendover in Utah. While Tsutaja was working on the paintings in quarantine at her live/work studio, the world was counting the lives lost in the pandemic. While thinking about the past, Tsutaja was also thinking about the present. It is a different kind of war, but the sheer scale of loss might serve to connect these paintings to the current issues we are facing.

"Spider’s Thread: This Landscape," one of the two paintings in the diptych that Tsutaja has created for this exhibition, represents the view in Japan, while the other, "Spider’s Thread: That Story," represents the narrative in the U.S. Tsutaja interweaves the uncountable, complex personal stories of the many different individuals living through 1945 that she has discovered in the course of her research, and reveals their connections as if placing red dots—or pinning target positions—on an enormous map that spans the WWII era to the present.

Since Tsutaja began working with the subject of World War II, she has employed a method to erase signifiers of nationality and racial difference in the stories she creates by replacing humans with anthropomorphic animal characters­—universalizing and diversifying scenarios that might otherwise be seen as historical and localized. The nuclear weapons used in WWII harmed not only the Japanese and the land, but also the Native American tribe on whose reservation was sited the uranium mine used to create the nuclear bombs; American workers at Hanford Site, the plutonium production complex operated by the US federal government established as part of the Manhattan Project; and Hanford Site’s downwinders’ lives and environment to this day.

Hovering largely unseen above the two paintings—only its eyes and legs are visible—is a huge spider, acting as an avatar of nuclear industry and its history. This spider reigns over and bridges the two different worlds. Both paintings show Sanzu-no-Kawa, the Japanese version of the River Styx, in which counterposed islands are set. In "This Landscape," the island is a girl killed in the Hiroshima bombing, floating in the river. In "That Story," it is a gas mask, metaphorically pointing to Hanford Site. Icons sprinkled throughout the works connect and relate to each other like constellations. Presented together, the paintings intertwine different moments and places to create a global portrait of our nuclear legacy.

In the exhibition’s virtual component, the "Daily Drawing" posted on Instagram will elaborate on a storyline in response to the paintings, functioning almost as a script or a guide for the diptych. At the same time, Tsutaja says, the paintings are the map for the Daily Drawings. The drawings may be viewed @ulteriorgallery on Instagram, Facebook, and Twitter.

The title "Spider’s Thread" is borrowed from a short story written by Ryunosuke Akutagawa in 1918. In the story, Buddha looks down into hell from heaven and tries to rescue one sinner, but this attempt at redemption is thwarted by human ego. In Tsutaja’s tableaus, the spider—i.e., nuclear industry—occupies the sky, overshadowing the land below, whose inhabitants’ lives and fates are thrown into chaos.

Gaku Tsutaja was born in Tokyo, Japan in 1974, and currently works in Queens, NY. In 1999, Tsutaja obtained a BFA with honors from Tokyo Zokei University of Arts and Design, and moved to Fukuoka to participated in the Center for Contemporary Art Kitakyusyu (CCA) as a research fellow. Tsutaja moved to New York in 2005 and graduated from SUNY Purchase College, Purchase, NY, in 2018. Tsutaja’s work has been exhibited at Shirley Fiterman Art Center at BMCC in New York, NY (2019, solo); Gallery of Visual Arts, University of Montana, Missoula, MT (2019); Equity Gallery in New York, NY (2018); Nitehiworks, Kanazawa, Japan (2012); Quartair Contemporary Art Initiatives, The Hague, The Netherlands (2007); Center for Contemporary Graphic Art, Fukushima, Japan (2004); and Kunsthallen Brandts Klaedefabrik, Odense, Denmark (2002). The exhibition Spider’s Thread is Tsutaja’s second solo exhibition with Ulterior Gallery. Following this exhibition, Tsutaja will work to debut a large-scale theater installation, with an accompanying video, in January 2021 at Rubin Center for Visual Arts in El Paso, TX.

Ulterior Gallery is an emerging art gallery on the Lower East Side of New York City. Established by Takako Tanabe, a Japanese gallerist originally from Tokyo, Ulterior is committed to the exhibition of works by an intergenerational array of artists of diverse cultures and backgrounds. Ulterior Gallery is located at 172 Attorney St. between Houston and Stanton on the Lower East Side. Gallery Hours are Thursday through Sunday, noon to 6 pm, and by appointments. For further inquiries, please contact Takako Tanabe: takako@ulteriorgallery.com.

Other events from Ulterior Gallery