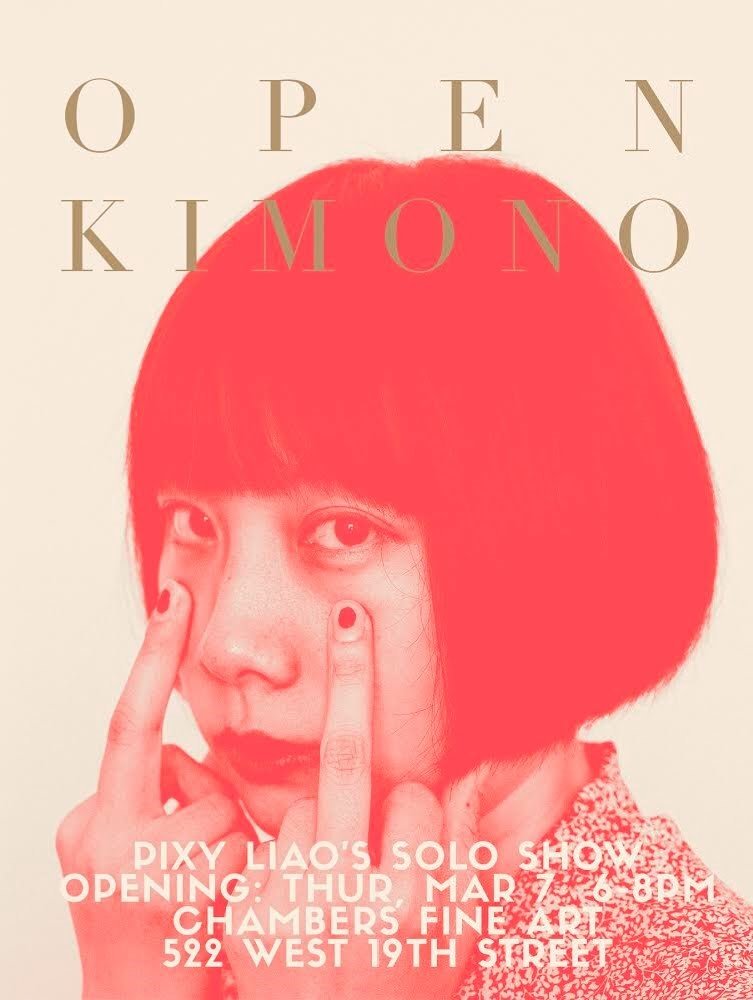 Chambers Fine Art is pleased to announce the opening on March 7 of Pixy Liao: Open Kimono. This will be the artist’s first solo exhibition with the gallery. Born and raised in Shanghai, China, Pixy Liao received her MFA in photography from the University of Memphis in 2008. It was within this completely new and foreign environment that she first began working as an artist, exploring everyday life in Memphis through a series of ‘American landscapes’. It was also in Memphis that she met her boyfriend-turned-muse Moro – inspiring the body of work that she has become best known for, called Experimental Relationship. The ongoing project is a staged documentation of their relationship, now spanning over 12 years, in which Liao creates various intimate, playful, and witty tableaux that often place her in a position of power over Moro, in a subtle reversal of gender roles.

The artist states, “As a woman brought up in China, I used to think I could only love someone who is older and more mature than me, who can be my protector and mentor. Then I met my current boyfriend, Moro. Since he is 5 years younger than me, I felt that whole concept of relationships changed, all the way around. I became the person who has more authority & power.” Open Kimono presents a selection from the latest iteration of Experimental Relationship, with most of the photographs on view taken in 2018 while the couple were traveling through their home countries China and Japan. As the title of the exhibition suggests, several of the images portray both artist and muse in traditional Japanese dress, although the intimate settings and sensual imagery take their inspiration from Japanese female Yakuza films rather than feudal Japan.

Alongside her photographs, Liao presents a new series of Risographs that were created during a recent residency at the School of Visual Arts (SVA) in New York. Risographs take their name from the Riso Kagaku Corporation, which manufactured a digital duplicator that automated a printing process similar to silk screen printing. It was released in Japan in 1986. Liao embraced the unpredictable method of printing, deconstructing the imagery from her existing photos into simple lines of color, experimenting with offset printing and a simplified color palette.

Located at one end of the gallery is a ladder on which visitors can climb to view Liao’s installation Temple for Her. The piece is a part of the artist’s larger conceptual series "Evil Women Cult", an imaginary cult that worships all of the “evil female leaders” in history. This particular piece is dedicated to Wu Zetian (624-705 CE), the only female emperor in the history of China. Within Liao’s miniature ‘temple’ is a pool of blood within the shape of a woman, a red staircase, a phallic throne, a pair of golden rolling eyes and a Chinese character Wu created for herself as her name, Zhao, which is a combination of two characters: "clear" and "sky." The temple is inspired by the lonely path the Empress took on her way to the pinnacle of power.​ The miniature format for this installation was created in conjunction with Flyweight, a bookshelf-sized project space located within the home of artists Clare Torina and Jesse Cesario, and has been re-staged for this exhibition.