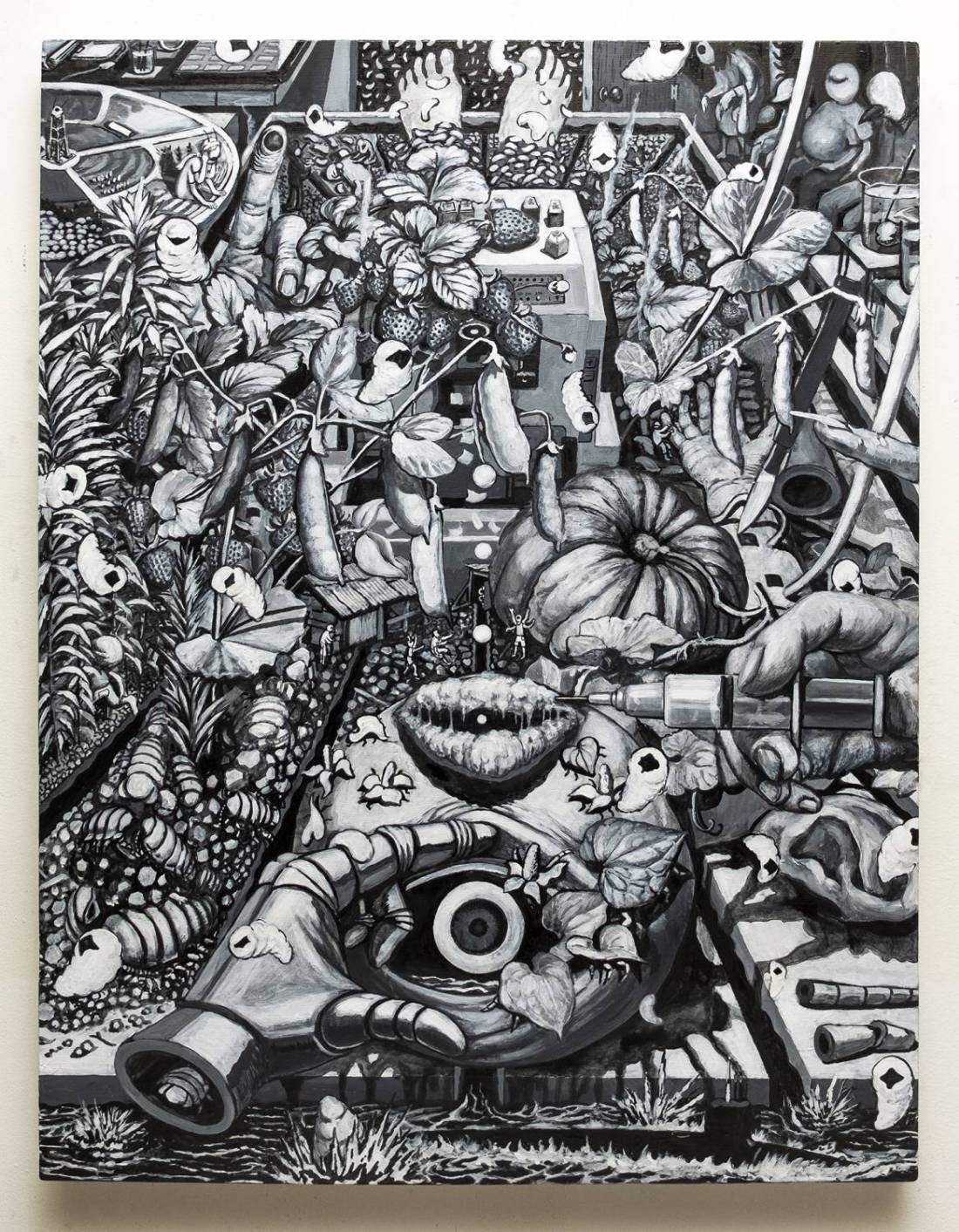 Ulterior Gallery is pleased to present Memory Bug, Gaku Tsutaja’s third solo exhibition with the gallery. The exhibition opens on January 14 with an afternoon reception from 3 to 6 pm. The artist will be present at the opening.

Tsutaja has created a series of research-based, mixed-media works that address the history and culture of nuclear power. Her first solo show at Ulterior Gallery in 2017 was based on a narrative originating from the 2011 Tohoku Earthquake and the related back story of infrastructure development in Japan from the postwar period on. Tsutaja’s second solo, in 2020, focused on the Japanese/American hidden history of the global hibakusha (nuclear victims) from the Manhattan Project to the present. Now, in Memory Bug, she further explores stories she has discovered within the histories of Hiroshima, Nagasaki, and the Marshall Islands—specifically chronicling both first and second generation hibakusha.

In computing, a “bug” is a fault in the coding that causes a program to misbehave, produce an unexpected result, or crash altogether. But what does it mean to have a bug in our collective memory? Through her works, Tsutaja strives to record and share an account of nuclear history that has not been widely discussed. After tracking many oral descriptions of important moments from survivors and researchers, Tsutaja more fully grasped the ways in which memory and historical narrative are constantly being modified. While some documentation might have been intentionally rewritten or erased, other information may have just dissolved due to shifts in recording and media preservation technology. For Tsutaja, the politics of the post-war mass-media was one of the significant reasons why the real stories, including the painful reality of survivors, was not available in the public realm. The information that was publicly shared, and which determined the popular narrative and established the societal memory of those events, might have been affected by a “bug” from the beginning.

Japanese Sci-Fi movies (called tokusatsu films) and manga involve many coded ideas generated from the history of the nuclear weapon. Growing up, Tsutaja relished these forms of visual culture, not understanding their underlying connection to Japan’s post-war devastation. Tsutaja’s process,  research and creation of a new narrative, revealed her rediscovery of the actual nuclear history hidden in manga and movies, such as Godzilla, Mothra, Astro Boy, Tetsujin 28, Nausicaä of the Valley of the Wind, and Akira. At the same time, Tsutaja’s image-making is deeply connected to old master painting and the history of art, as well as the politics and mythologies imbedded in those works. In choosing to produce a group of paintings for this exhibition, Tsutaja is constructing a dialogue between post-war Japanese visual history and mainstream art history through her re-interpretation of mass-media and subcultural imagery.

One example Tsutaja finds especially resonant is Mothra, which first appeared in the 1961 film produced and distributed by Toho Studios. Mothra is a colossal moth monster and became a recurring character in Godzilla movies. The film alludes to the Marshall Islands, using the nuclear experiments there as a narrative around which to build the story. Mothra is the main instance in which Tsutaja found a “bug.”

Tsutaja will exhibit seven densely configured new panel paintings and a series of small drawings centered on the histories of Nagasaki, Hiroshima, and the Marshall Islands. One sculpture, Secret Dioramas (2019), will accompany these works to draw attention to two of the most significant moments of WWII—the Hull note (the final diplomatic proposal before the attack on Pearl Harbor) and the Enola Gay (that dropped the atomic bomb on Hiroshima). With Tsutaja's familiar wit and use of double meanings, the show’s title connects with the insect images she has widely introduced into her paintings, bugs computing, as well as information preservation and human memory, and insects which we tend to find grotesque and troublesome.

Gaku Tsutaja bio: Gaku Tsutaja was born in Tokyo, Japan in 1974, and currently works in Queens, NY. In 1999, Tsutaja obtained a BFA with honors from Tokyo Zokei University of Arts and Design, and moved to Fukuoka to participate in the Center for Contemporary Art Kitakyusyu (CCA) as a research fellow. Tsutaja moved to New York in 2006 and graduated from SUNY Purchase College, Purchase, NY, in 2018. Tsutaja had her first museum solo exhibition at Maruki Gallery For The Hiroshima Panels last summer. Tsutaja has exhibited internationally and recent exhibitions include: Hawaii Triennial 2022, Honolulu, HI (2022); Rubin Center for Visual Arts, El Paso, TX (2021, solo); Ulterior Gallery, New York, NY (2017 and 2020, solo); Missoula Art Museum, Missoula, MT (2020, solo); and Shirley Fiterman Art Center at BMCC in New York, NY (2019, solo). Tsutaja’s exibitions and artworks have been widely reviewed in numerous outlets including: the NYTimes, Artforum, Hyperallergic, Real Tokyo, Bijutsu-Techo, Nikkei: Nihon Keizai Shimbun, and NHK Broadcast. This exhibition is Tsutaja’s third solo exhibition with the gallery and the first at the gallery’s new location in SoHo.

About the Gallery: Ulterior Gallery, first established on Attorney Street on the Lower East Side of NYC, expanded into its current space in SoHo in spring 2022. Founded in 2016 by Takako Tanabe, a Japanese gallerist originally from Tokyo,  Ulterior is committed to the exhibition of works by an array of intergenerational artists from diverse cultures and backgrounds. Ulterior Gallery is located at 424 Broadway, #601, New York, NY 10013, the top floor of a designated landmark building near the crossing of Canal and Broadway. Gallery Hours are Tuesday through Saturday, noon to 6 pm, and by appointment. For further inquiries, please contact Takako Tanabe: takako@ulteriorgallery.com.

Other events from Ulterior Gallery