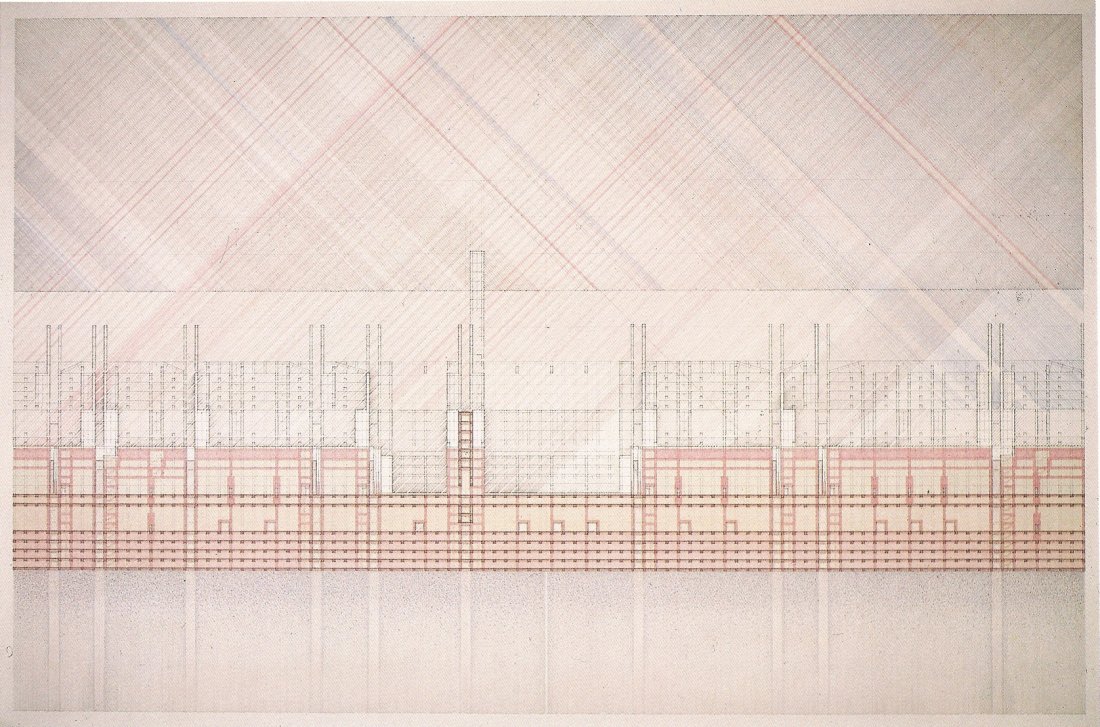 WESTWOOD GALLERY NYC is pleased to present Logical Insanity: Drawing ONECITY and the Abstract /Buildings/, a solo show of work on paper by WILL INSLEY (1929-2011). On view in the gallery’s lower level are thirteen drawings, including four drawings of ONECITY completed in the early 1980s and nine drawings of the abstract /buildings/ from the late 1960s. The artworks on exhibit represent only a fraction of the numerous intricate drawings created over the artist’s lifetime. This exhibition is one of a series from the gallery core program which presents artists with a significant, yet overlooked, contribution to art history.

For 50 years, Insley devoted his creativity to the investigation of a theoretical civilization and focus on its single metropolis, ONECITY, a labyrinthine structure buried in the central North American plains.[i] The artist’s discovery of ONECITY involved the location and connection of points on a grid, in turn revealing the correlation of space and time. For Will, his architectural studies allowed him to define abstract architecture with a reliance on theoretical principles and a function of space rather than structure. The detailed process of thinking, writing, drawing, making, and visually communicating his concepts, provided a way for him to challenge the role of the artist during the Minimalist, Conceptual, and Earth Art movements of the 20th century. In Insley’s essay concerning abstract architecture, he writes:

“Visionary architects of the 18th century, most particularly Boullee, indulge in basic geometric abstraction, but the projects always serve some specific purpose, i.e. a museum, a palace for a monarch. The cenotaph presents an interesting case of possible abstract architectural space. The empty tomb comes close to abstraction in concept.” [ii]

In the four drawings of ONECITY on view, Insley pulls diagrammatic language from formal architecture, while incorporating the mythological visions seen in the abstract /buildings/ outside of the city center. The slash marks between the word /building/, indicates the work as an abstract building. In addition, each drawing is titled with two years denoted between a slash, the first date is the initial discovery and inception of the idea, and the second date is the completion of the drawing; in rare cases, some ink drawings would take him over 15 years to complete.

In the fourteen drawings of the abstract /buildings/, Insley laid groundwork for his architectural explorations of ONECITY. Many of the drawings carry titles to present the complex formal vocabulary Insley defined for their categorization, such as Channel Space, Volume Space, and Passage Space. Channel Space, for example, grows through pyramid-forming stages from the center of the square base with inclined sides marking a grid in two- and three-dimensional spaces. Insley defines Channel Space as a “flat diagram extended to depth, wandering in the passage flow in hexagonal wave toward space unknown.”

In Insley’s diaries, he writes that the /buildings/ exist buried in the wilderness far outside the metropolis of ONECITY, and have no practical function of any kind. “[The /buildings/] only reason for existence is to contain spatial situations sympathetic to the religious beliefs of the civilization of ONECITY. This focuses on a worship of the horizon line and of a passing through a space in that line between the earth and sky and of then embarking on travel into and return from the future with future information.” [iii]

In these drawings, Insley points his compass towards the future role of the artist, as the hybridization of traditional forms and methodology in art and architecture, which lend direction to presenting abstraction.