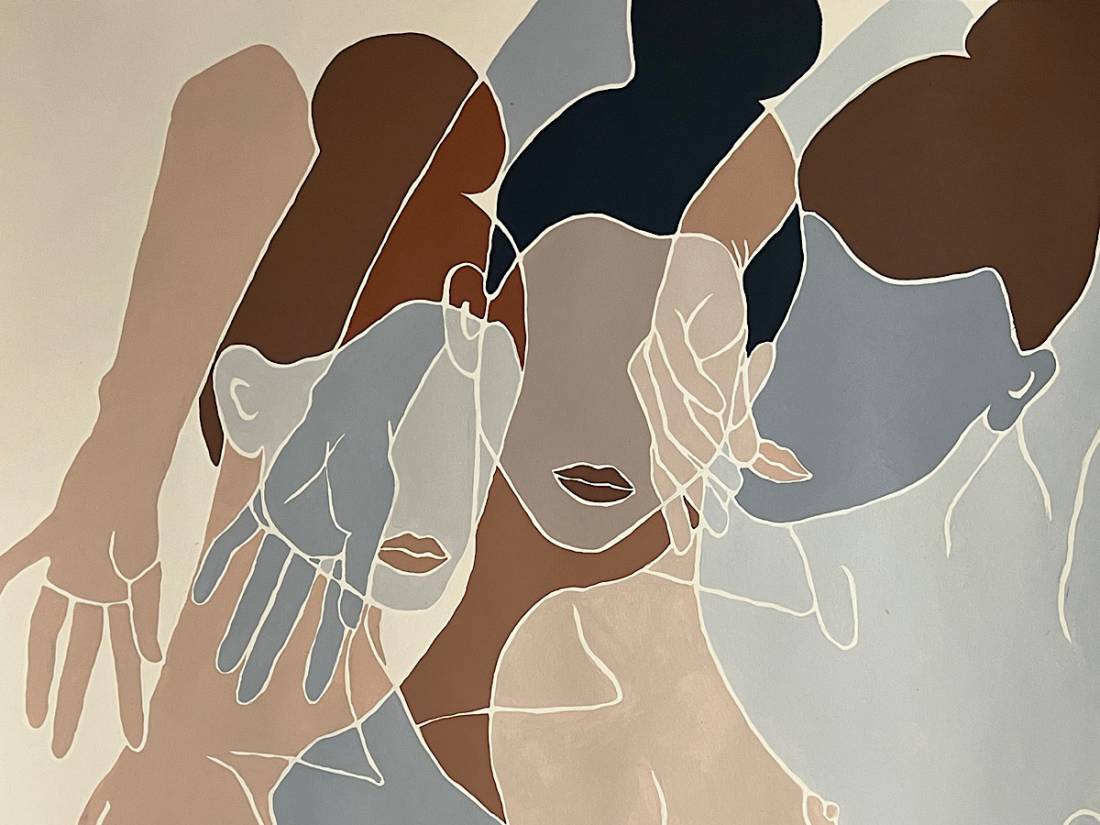 The Untitled Space is pleased to present “Multifaceted” the debut New York solo exhibition of artist Faustine Badrichani opening on June 9th, and on view through June 30th, 2022. Curated by Indira Cesarine, “Multifaceted” debuts a collection of acrylic paintings on paper and wood panel that explores female identity through figurative abstraction. Intimacy and universality are central themes to Badrichani’s work which emphasizes the essence of womanhood through faceless female silhouettes. A French artist from Provence, Badrichani has been based in New York City for over ten years. After exploring a range of mediums including oil painting and sculpture, she developed her signature style in acrylics. Through complex compositions ripe with intricate details and a linear usage of negative space, Badrichani concentrates on the abstracted female figure and representations of femininity. Rendered from live models, Badrichani’s inclusive figures present the multifaceted nature of every woman. Her debut solo show will feature a number of large-scale paintings complemented by smaller studies and works on paper created with oil pastels and employing the 180-year-old technique of cyanotypes.

“I feature empowered women who exist for and by themselves, away from any form of fetishization. In my practice, the body is not just an external shield or shell - it is inherent to female identity, and painting it is a way of revealing the very essence of femininity. From a formal perspective, my work plays with negative space using a reduced color palette to form contrasting silhouettes. Shapes create lines, guiding the viewer into the essence of women.

Through my artwork, I seek to connect intimacy and universality. My characters don’t have distinct features or identifiable faces, their skin colors are for the most part not even connected to skin color as we know them. This allows me to showcase women as a universal entity, an essence of womanhood. And at the same time, their nudity reveals their intimacy. These women are every woman, each of them unique and universal.

My silhouettes of nudes are never sexualized or objectified. Through the representation of woman's bodies, I address many different themes including intimacy, strength, power, happiness, and freedom, but also anxiety and vulnerability. I represent confident women who are who they want to be, multifaceted, empowered, mysterious, and universal.” - Faustine Badrichani

A self-taught artist, Faustine Badrichani has exhibited her work internationally and is featured in numerous private collections. Badrichani grew up in the French countryside of Provence before moving to Paris, and later, London where she worked in finance. After attending classes at Central St Martin Art School in London, in 2011 she left her career in finance and moved to New York to pursue her interest in art. After exploring a number of themes and mediums she found her voice with renditions of the female form, ranging from figurative realism to the more complex and abstracted paintings she is known for today. Notable exhibitions include her solo shows “D’abord la Mer” (2021) and “Silhouettes” (2020) in Paris, France at Esther et Paul gallery. She has also shown her work in group exhibitions including “True Stories” (2022) and “Art4Equality x Life, Liberty, and The Pursuit of Happiness” (2021) presented by The Untitled Space, as well as at Insight Art Space and Brooklyn Collective. Her solo exhibition “Multifaceted” marks her first exhibition as a represented artist of The Untitled Space.

ABOUT THE UNTITLED SPACE
https://untitledspace.com

Other events from The Untitled Space