Charles Hinman || Will Insley: Structural Abstraction on the Bowery, 1960s-80s 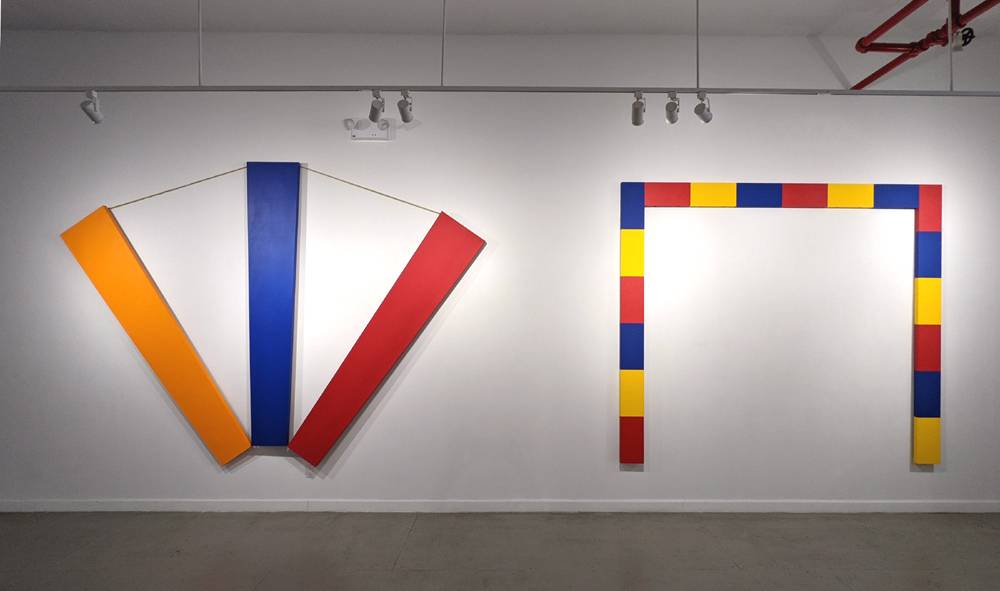 WESTWOOD GALLERY NYC presents a two-person exhibition by New York artists Charles Hinman (b. 1932) and Will Insley (1929-2011), entitled Structural Abstraction on the Bowery.  The artwork on exhibit highlights the parallel development of two artists who created frontiers in the history of the art world. Both artists happened to live in the same building 231A Bowery for fifty years, each working on structural, conceptual, and abstract artwork. On view in the exhibition are ten works of art including four paintings by Will Insley, four paintings by Charles Hinman, and two studies on paper, one by each artist. Structural Abstraction on the Bowery will be on view May 22 – July 31, 2021.

In the 1960s, many New York artists began to move toward geometric abstraction and minimal art as a reaction against the preceding Abstract Expressionist movement of the 1950s. Progressing with the use of logistical principles, formulation and concept, artists began to push painting into real space and three-dimensional form, and soon developed the Shaped Painting movement in a variety of styles including Hard-Edge, Color Field, Op, Pop, Conceptualism, and Minimalism. Shaped paintings gave architectural structure to canvases and allowed for the exploration of time, light, and color in dimensional space. The importance of the movement was further cemented by a seminal group exhibition at Tibor de Nagy Gallery in 1965 entitled “Shape and Structure,” curated by Frank Stella and Henry Geldzahler, which included shaped paintings by Charles Hinman, Will Insley, and Larry Bell alongside non-objective sculptures by Donald Judd, Robert Morris, Carl Andre, and Robert Murray. From the exhibition, MoMA purchased Hinman’s 8x5-foot Poltergeist (1964) for its permanent collection.

From the beginning of their careers, Charles Hinman and Will Insley’s work was conceived from two very different schools of thought. Hinman talks of the six dimensions of his paintings: “My concept of my work is dynamic---never static. I think of my paintings as occupying a 6-dimensional space: the three dimensions of space, one each of time, light, and color.” While Insley regards eight dimensions through his paintings and abstracted art-architecture: “It is believed that there is a series of eight shells in a structure referred to as the Eight Dimension Spiral and it is through this spiral that the journey of all death beyond human concept passes.” Both artists’ processes resulted in shaped structural artwork.

Charles Hinman’s mathematically elaborate wood stretchers and canvas accentuate the boundaries between sculptural and illusory spaces. On view in the exhibition, Aeolus (1989) is a grand all-white painting reaching ten-feet high that is reminiscent of the Greek god of the winds and inspired by Hinman’s early years working in his shared studio with James Rosenquist at an abandoned sail factory in Lower Manhattan’s Coenties Slip.

In contrast, Will Insley’s paintings explore the conceptual beginnings of his lifelong artistic endeavor ONECITY, a theoretical civilization and labyrinthine metropolis existing in the central North American plains. In his ‘Wall Fragment’ paintings featured in the exhibition, the artist created fragmented objects from an architectural and pictorial context with inner investigations through extensive writing in unpublished journals. On view in the first gallery section, Wind 64.6 (1964) is a wheel of four black triangles with identical yellow grid bars meeting at right angles around a central opening, an early representation of paintings by Insley that utilize diagrammatic systems to fragments from the mind and of the walls of ONECITY.

On the main gallery wall, two 1960s paintings by Insley and Hinman hang in dialogue with one another, expressing contradictions between real/illusory, positive/negative, and relaxation/tension. In this context, Hinman’s Liberation (1964) is a composition of three colored rectangular modules tapered at their base and held in stasis by two cords and gravity. Meanwhile, Insley’s Wall Fragment 68.7, Ruler (1968) is a fragment of invisible art-architecture measured into eighteen equivalent rectangles of 8x16 inches in three primary colors. Created only four years apart, both works feature a method of measuring space, with Hinman’s spanning the two-dimensional geometry of the wall and Insley’s comprising the human element using 8 inches to represent the spread of a person’s hand. Despite their differences, both paintings become the wall, and the wall becomes an environment for each artist’s trajectory from geometry to their individual interests.

The third gallery section highlights Hinman’s Canary Islands (1988) and Insley’s Wall Ring (1967), two paintings that juxtapose the freedom of curvilinear forms within the restraints of color. Additional works include two studies by both artists of works on view in the exhibition. James Cavello, Curator and gallery co-founder maintained a close gallery relationship with both artists and is committed to elevating their history and exposing their artwork to the public.

Charles Hinman (b. 1932) is a New York Minimal painter who pioneered shaped canvas paintings through his innovative use of shadow, light, and shape with complex mathematical formulae. Born and raised in Syracuse, New York, Hinman holds his BFA from Syracuse University and later moved to New York City to study at the Arts Student League of New York. His first studio in the early 1960s was shared with James Rosenquist in an old sail factory in the Coenties Slip in Lower Manhattan, and he later shared a studio with Robert Indiana on Spring Street. In 1965, he moved into his own studio and living space at 231A Bowery in the same building with artists Will Insley and Max Gimblett, where he resided for over fifty years. He was part of the growing community on the Bowery and downtown of influential painters and sculptors including Agnes Martin, Ellsworth Kelly, Eva Hesse, Adolph Gottlieb, Roy Lichtenstein, Robert Ryman, Brice Marden, Robert Mangold, and many others.

Hinman’s work has been included in era defining exhibitions alongside many of his Minimalist and Conceptual contemporaries. His art career began with a seminal exhibition at Sidney Janis Gallery, titled '7 New Artists', and thereafter a solo exhibition at Richard Feigen Gallery in 1964.

Charles Hinman’s artwork is exhibited internationally and collected by major institutions and private collectors across the world. His work is included in the permanent collections of the Whitney Museum of American Art, the Museum of Modern Art, the Los Angeles County Museum of Art, the Hirshhorn Museum and Sculpture Garden, the Denver Art Museum, the Nagaoka Museum in Japan, and the Tel Aviv Museum in Israel, among others. He is the recipient of a Guggenheim Fellowship and four Pollock-Krasner Foundation grants. His most recent retrospective was in 2019 at the Kreeger Museum, Washington DC. Charles Hinman is exclusively represented by Westwood Gallery NYC.

Will Insley (1929-2011) was an American abstract artist who dedicated 50 years to creating paintings, drawings, writing, models and photomontages based on his investigation of a theoretical civilization and focus on its single metropolis, ONECITY, a labyrinthine structure buried in the central North American plains. Born in Indianapolis, Indiana and a lifelong resident of New York City, Insley received his BFA in Architecture from Amherst College and his MFA in Architecture from the Harvard Graduate School of Design. Over his lifetime, Insley never utilized his architecture degree in the construction of functional buildings, and instead devoted his pursuit of art through abstract formalities and structural principles. The detailed process of thinking, writing, drawing, and visually communicating his concepts, provided a way for him to challenge the role of the artist during the Minimalist, Conceptual, and Earth Art movements of the 20th century.

Will Insley has been the subject of numerous museum exhibitions in the United States and Europe, including a solo exhibition at Guggenheim Museum (1984) and Museum of Modern Art in New York City (1971), as well as inclusion in Documenta 5 (1972) and Documenta 6 (1977).

Will Insley’s artwork is collected by major institutions and private collectors across the world. His work is reflected in the collection of Brooklyn Museum of Art, Smithsonian Museum, Museum of Modern Art, Whitney Museum of American Art, Indianapolis Museum of Art, North Carolina Museum of Art, Hirshhorn Museum and Sculpture Garden and many others. The Estate of Will Insley is owned, represented, and managed exclusively by Westwood Gallery NYC.