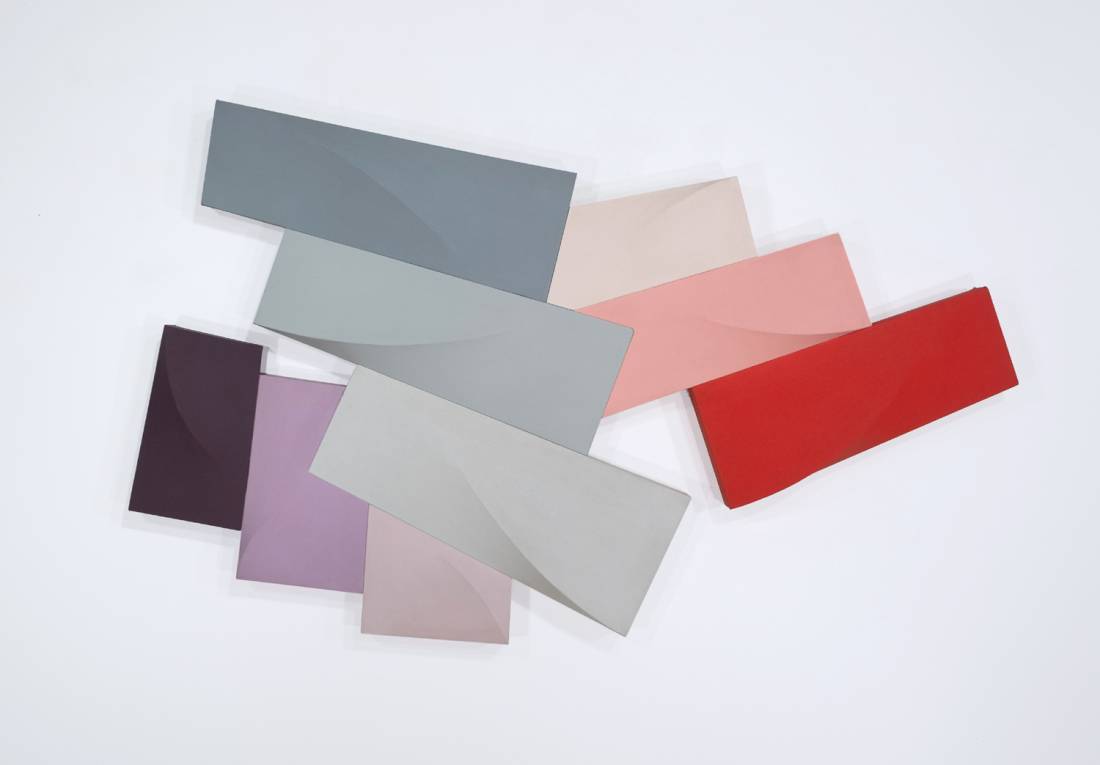 WESTWOOD GALLERY NYC presents “Charles Hinman: Beyond Minimalism,” a solo exhibition of paintings and works on paper. This is Hinman’s third solo exhibition with the gallery and a celebration of the artist’s 90th birthday. The exhibition takes its title from a 1990 essay by American art critic Donald Kuspit and includes eight paintings and fifteen works on paper from one of Hinman’s most prolific periods – the 1980s. The exhibition is curated by James Cavello in keeping with the core gallery program highlighting the culturally rich artistic history of the Bowery Arts District. Charles Hinman is exclusively represented by Westwood Gallery NYC and the exhibition will be on view from January 28, 2023 – March 25, 2023.

In his youth, Hinman was a developing artist who had athletic abilities and at 21 years old was recruited as a pitcher for the Milwaukee Braves. After an unforeseen injury to his pitching arm, he focused solely on his art career and received a Bachelor of Fine Arts from Syracuse University. After graduating, Hinman moved to New York City where he studied at the Art Students League alongside Morris Kantor, Jim Rosenquist, and Lee Bontecou. In 1956 he was drafted into the army as a social worker stationed north of Santa Barbara in Lompoc—a region well-known for its color-banded flower fields—an early influence on Hinman’s artistic sensibilities. Upon his return to New York, he continued his studies while teaching mechanical drawing at the Staten Island Academy (1960-62) and thereafter teaching shop at Woodmere Academy in Long Island. Concurrently in 1960, Hinman and Jim Rosenquist moved to the Coenties Slip in Lower Manhattan, taking over Agnes Martin’s old loft when she moved to South Street. They joined a community of artists including Robert Indiana, Jack Youngerman, Lenore Tawney, Cy Twombly, and Ellsworth Kelly.

Hinman’s first artistic breakthrough arrived in 1963, when he used his mechanical drawing and precise construction skills to innovatively shape wooden stretchers and canvas. His first series joined winglike canvas objects with hinges and rope that could be adjusted to hold the artwork in equilibrium by using gravity. This new work was featured in Hinman’s first New York exhibition “Seven New Artists” at Sidney Janis Gallery in 1964 alongside Arakawa, Larry Bell, Bob Irwin, Robert Slutzky, Bob Whitman, and Norman Ives.

The complexity of topographical form, shape, color, and concept expanded into separate contoured canvases mathematically plotted and bolted together resulting in dramatic structures. The shaped paintings appear as almost carved directly from the wall, protruding into a third dimension. During the 1960s, numerous paintings were placed in the collections of major US institutions and private collections, including the acquisition of Poltergeist (1964) by the Museum of Modern Art, NYC—an approximately eight by five-foot canvas that emerges one and a half feet from the wall to a singular shaped point. In 1965, Hinman moved to 231A Bowery, an 8,000 sq ft barrel vaulted loft, which would become his home and studio for over five decades.

By the time Hinman reached the 1980s, his shaped paintings had already explored experimental forms of tension in the 1960s and the seriality of angular shapes in sequence in the early to mid-1970s. The definitive geometry of his 1980s paintings became the constructed arc. Appearing first in shaped paintings of the late 1970s, the arc was both inspired by Hinman’s early years experimenting with a baseball’s trajectory and by his days at Coenties Slip observing a boat’s sail slicing through the sky, creating a curving upward motion to capture the wind, sky, and sail. It was during this period that Hinman created his largest shaped canvas to date, Archytas (1980), a commission for Manhattan’s Grand Hyatt Hotel which reached a total span of 32 feet long and 14 feet high. The exhibition at the gallery features a 10-minute video of its creation and installation.

On view in the exhibition are eight paintings from the 1980s, each uniquely innovative in their use of arcs, varying sizes of shaped canvas panels, and combinations of colors. In Watkins Glen (1987), soft pastels of blue and yellow meld together in similar bands of rectangular panels brought together by a black to grey to white centerline. In Cantilever (1986), similar forms progress from left to right, bottom to top, each held to the last in a visual and illusory tension reminiscent of his ‘60s canvases with an ‘80s palate and color sensibility. In Lavender Rise (1983), one of a small portion of vertically oriented paintings, two gem-like angular panels with a singular arced triangle hold the base of a soaring lavender canvas tapering a curved line from its center to top left. And in Phoenix (1989), Hinman focused on mostly all white with three panels of royal blue, electric yellow, and black spreading nearly twelve feet across like wings on a sail. In addition, fifteen works on paper on exhibit emphasize Hinman’s detailed drawing process before finalizing his shaped paintings; they include charcoal sketches, graphite mathematical working drawings, and finished pastel color studies.

Writing about his interests in his 1980s shaped paintings, Hinman says:

“I enjoy the ambiguous visual dialogue between actual space and illusion. There is play between that which we perceive to be the sculpture object and the imaginary flat plane of the painting space. The one constantly qualifies the other visually. I have predilections for that kind of form, which is buoyant, soaring, and free of gravity. The shapes often appear to be wing-like or cantilevered. The double curved surface movement of the canvas is a formal element as expressive as any other formal element such as shape, mass, line, or color. It is easy to identify with the taut canvas membrane over the wood frame, which is like our skin over bones. However, the abstract pictorial space is beyond our physical reach. Distances are not measured, and the scale is limitless.”

This presentation of paintings and works on paper from the 1980s allows us to experience the expressivity that Kuspit discusses and the soaring shaped canvases from this seminal period in Hinman’s storied career.

Charles Hinman (b. 1932) is a New York Minimal painter who pioneered three-dimensional shaped canvas paintings through his innovative use of shadow, light, and shape with complex mathematical formulae. Born and raised in Syracuse, New York, Hinman holds his BFA from Syracuse University and taught at the Arts Student League of New York. In 1965, he joined the growing community of artists on the Bowery and moved into his studio and living space at 231A Bowery in the same building with artists Will Insley, David Diao, Tom Wesselmann, James Rosenquist, and Max Gimblett, where Hinman resided for over fifty years.

Hinman’s work has been included in era-defining exhibitions alongside many of his Minimalist and Conceptual contemporaries. His art career began with a seminal group exhibition at Sidney Janis Gallery, and thereafter his first solo exhibition at Richard Feigen Gallery in 1964.

Charles Hinman’s artwork is exhibited internationally and collected by major institutions and private collectors across the world. His work is included in the permanent collections of the Whitney Museum of American Art, the Museum of Modern Art, the Los Angeles County Museum of Art, the Hirshhorn Museum and Sculpture Garden, the Denver Art Museum, the Nagaoka Museum in Japan, and the Tel Aviv Museum in Israel, among others. He is the recipient of a Guggenheim Fellowship and four Pollock-Krasner Foundation grants. His most recent retrospective was in 2019 at the Kreeger Museum, Washington DC. Charles Hinman is exclusively represented by Westwood Gallery NYC.