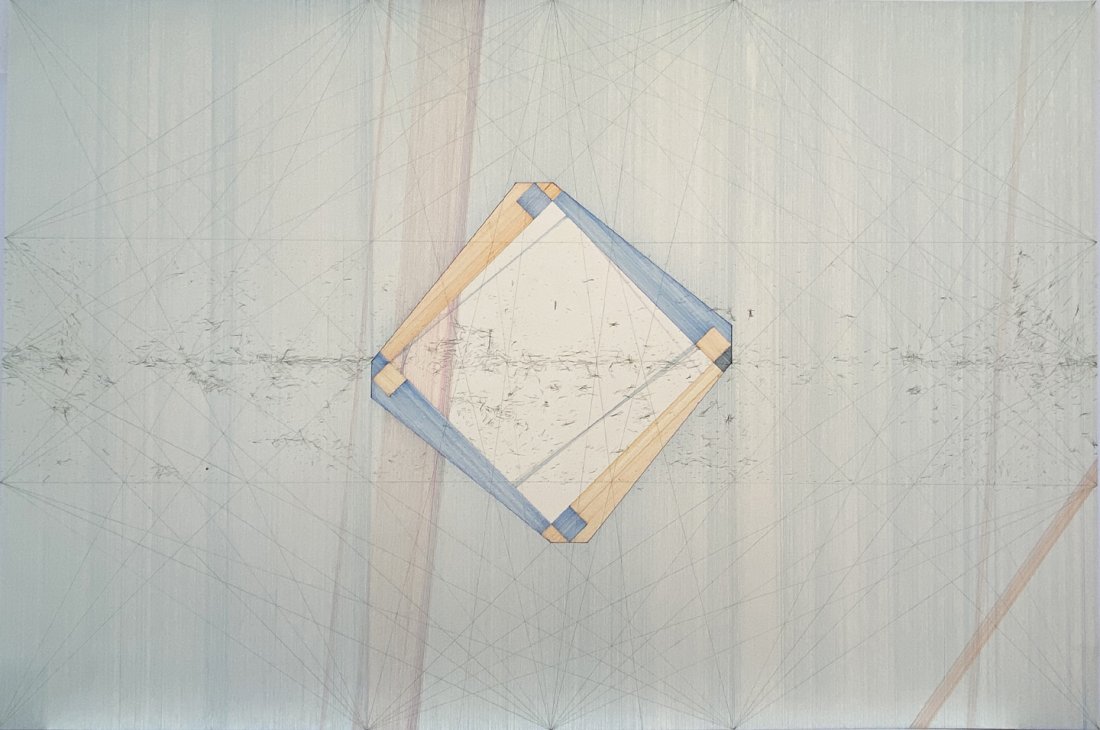 WESTWOOD GALLERY NYC is pleased to present Alan Steele: Unconditionally Constitutional, a solo exhibition by New York artist Alan Steele. This is his first solo show with the gallery and includes thirty new artworks as well as works from the 1990s which trace the evolution of his artistic vision. The curated exhibition highlights Steele’s concept of retrieving discarded elements from previously completed work and constructing the remnants of abstracted fragments to solve complex ideas of space, time, and identity.

Steele established himself during the early 1970s as a minimalist painter working with mathematical formulae projected on a grid. Foreseeing the limitations of minimal art and painting in 1974, he started a theoretical architectural project derived from the problem of “what is a labyrinth and how would one design one?". The result was a complex labyrinth based on a matrix, soon becoming the foundation for Steele’s future work and a source he continuously references to generate new structures.

As an artist who has spent much of his childhood in the West Indies, South America and South East Asia, as well as traveling the world in search of rare tribal artifacts and mythical cultures, Steele is compelled to explore the ‘act of being’ in his artwork. His artistry is a quest to understand theories of knowledge, history and the basic relationship of objects and their attachment to tradition, culture, and global divergence.

In his words regarding interpretation and identity, he writes: “Can a work of art survive the world? Can the “act of being” be unconditionally constitutional in an incomplete world? Art is the reminder of every attained mode of organization which man is committed, and through which he defines himself. Consequently art can be emotionally moving. Its emotion is not the primary violence of instinct, but the much more profound feeling with which we contemplate the structural and organized truth. Art can disclose only what is endowed with a prior discipline and imagination. It asserts and proclaims the modes of imagination and the ordered infinity of non-aesthetic aspects of experience.”

The exhibition’s title drawing is a triptych—composed of two containers flanking a large ruler over a plexi panel—allowing for the objective, subjective, and verisimilar viewing positions of his work’s relationships. In the leftmost container, a perforated wall allows for the view of a skeletal arm, a standard unit of measurement for a yard; in the rightmost container, a window shows the hollow interior with the same container suspended in reverse; and in the center panel, Steele places his abstracted language, superimposed by a Ticonderoga pencil displaying a ruler. In juxtaposition to the title drawing, his newest works completed during the COVID-19 shutdowns presents the COVID-19 genome sequence in conversation with his abstraction.

Alan Steele was born in Caracas, Venezuela, grew up in Rio de Janeiro, Brazil and received his BFA from the School of Visual Arts and MFA from Rhode Island School of Design. He studied with Jo Bare, Robert Mangold and Castro Cid, finding affinity with some of early minimal and conceptual artists, such as Ad Reinhardt, John McLaughlin, Robert Irwin, Robert Barry, Will Insley, Walter De Maria, Michael Heizer and Richard Artschwager. Later, he moved to the Bowery and helped in fabrication of his contemporaries working with Tom Wesselmann, Will Insley, and on a large scale commission project for Charles Hinman, as well as working as part of installation crew for Leo Castelli Gallery and Ileana Sonnabend Gallery. He has lived and worked on the Bowery for over four decades. Steele’s work has been exhibited internationally and is part of numerous public, corporate, and private collections. He is also a curator of ethnographic art, from Africa, The Americas, Asia, Indonesia and Oceania.