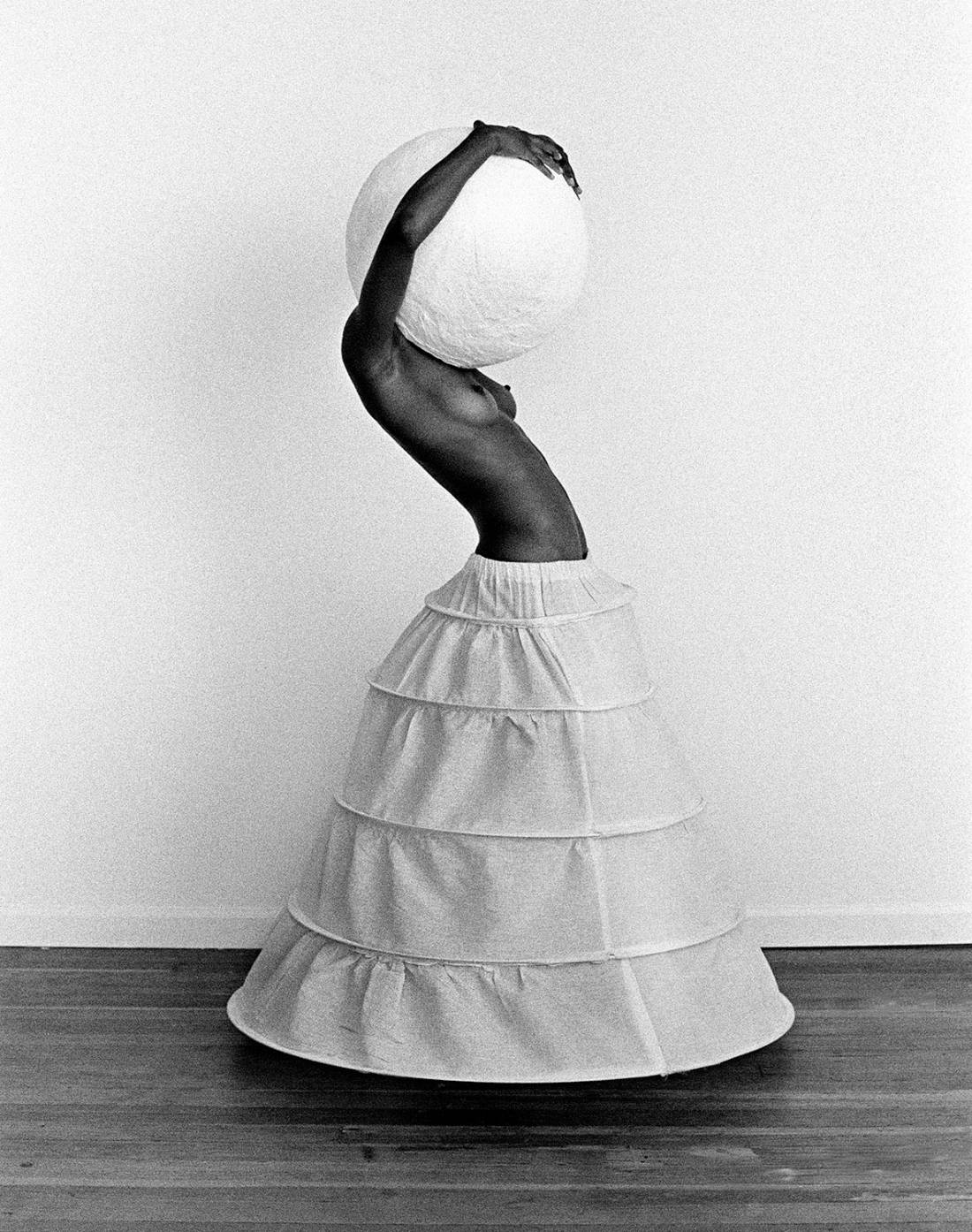 Amodaj created the Hoop and Ball series of photographs in June 2010 with dancer and author Shawnrey Notto. The photographs were based on an earlier series of drawings Nenad made of Notto wearing parts of the deconstructed wedding dress during his figure drawing study in Michael Markowitz’s 23rd Street studio in San Francisco.

The hoop skirt serves as an augmentation device, a skeletal extension meant to alter the visual perception of the human form. To realize the full associative power of the hoop, Amodaj created a counter-shape to the hoop, a white sphere (the Ball) made from plaster strips, to match the cloth texture and placed it in a dynamic relationship with his model.

Notto improvised the poses from Nenad’s drawings in constant slow motion. The whole project was done in two 3-hour sessions with no rehearsals and no replays. The minimalistic setting, uniform lighting, and central vantage point shift perception from a trivial reality to a metaphysical one. The intent was to induce the spectator to spontaneously alternate between the three aspects: the human form, the symbolic function of the skirt, and the geometry of the cone and sphere. The spontaneity of dynamic poses and the imperfections of a handheld camera balance this sparse imagery.

The exhibition presents a selection of 15 photographs from a project collection of over a hundred. Most of the series are gelatin-silver prints from a 35 mm film, with a few exceptions for large-scale digital color prints.

Amodaj was influenced by the work of Bernd and Hilla Becher's typologies of industrial buildings and František Drtikol’s nudes. In the spirit of Becher’s “typologies,” Amodaj’s Hoop and Ball series of photographs explores endless mutations of the hoop skirt architecture, a clothing item with a curios geometric form that can be classified as a “flexible cone.” It is a form that appears both in nature and in artifice: flowers, bells, horns, nuclear power plants, roofs, hats, etc.

Born and raised in Belgrade, Serbia, Amodaj’s passion for photography started at a young age when his late father, Samuilo, gifted him a Beirette camera. His father was a constant source of encouragement and support, inspiring Amodaj’s career as a self-taught photographer. Later in life, Amodaj earned a degree in Electrical Engineering and spent many years designing software for microscopes and visual exploration of micro-worlds. In 2005, he co-founded the Open Source “Micro-Manager” project at the University of California San Francisco, funded by the National Institutes of Health. From 2002-2010 he studied figure drawing in Michael Markowitz’s “23rd Street Studio,” and he credits his mentor Markowitz as an inspiration for this project.  Amodaj has been living in San Francisco since 1998.

Other events from Robin Rice Gallery