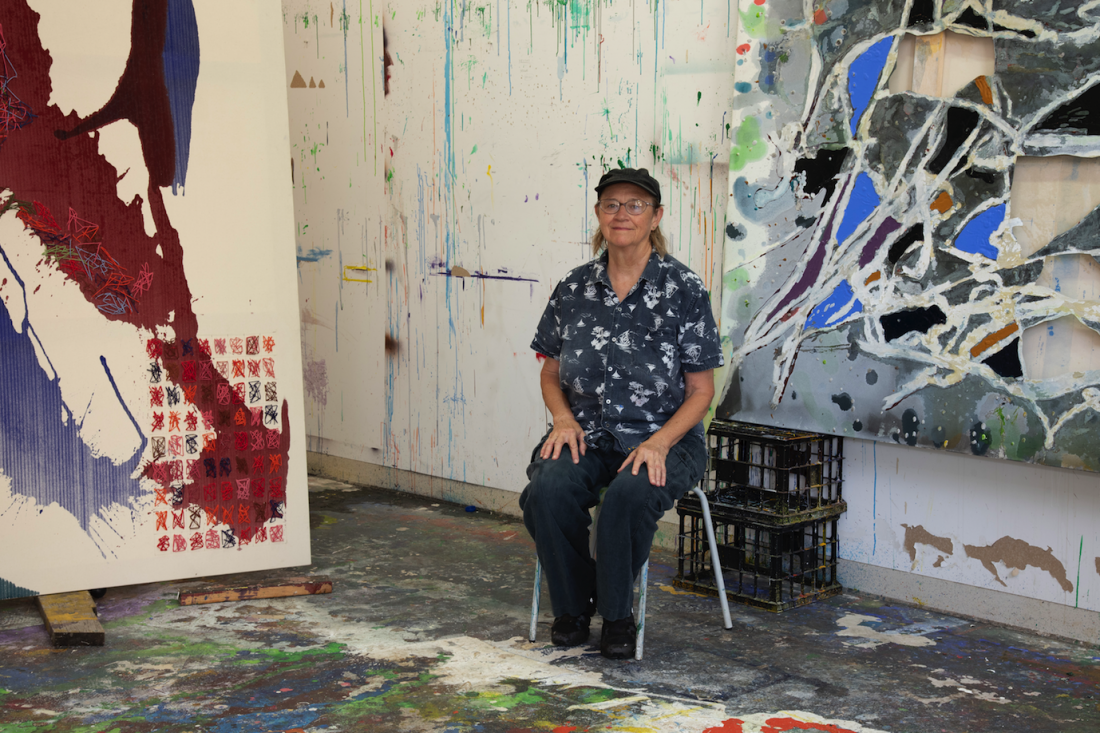 Thomas Erben is pleased to announce Stretchers Strung Out On Space, an exhibition of new paintings by Dona Nelson, her eighth presentation with the gallery. Praised for her individuality, Nelson has established herself as an artist committed to thoroughly exploring the progressive potentiality of her practice, wherever it may lead. Over time, Nelson has employed a wide repertoire of materials as well as approaches and processes. Each painting is individually conceived resulting in a great variety of compositions and images.

Stretchers Strung Out On Space features a series of "boxes", freestanding figurative works painted from live models. Nelson prefers to have another presence in the studio, which makes working from a model or collaborating with her assistants an intrinsic element of her methods. Similarly her work solicits an active participation by the viewer.

Her celebrated two-sided canvases, for example, invite us to consider two planes which often are visually very different but - materially - interdependent. Not being able to observe both at once the viewer feels compelled to remember the opposite side, trying to reconcile how each forms the other. To do so, Nelson forces the viewer to circumnavigate the paintings, making the surrounding space as conceptually active as the works themselves.

Nelson has said, "I am not an expressionist. I am a materialist." - not intentionally making paintings to express emotions or ideas outside of the materiality of the painting itself.

Part of Nelson's originality lies in her approach to not replace the reality of the canvas with an idea or a repetitious image. To work as she does, it requires complete presence in the moment and full focus on the physical act of painting.

Dona Nelson - Stand Alone Paintings, a book / catalogue published in 2020 to commemorate her 2018 survey show at the Tang Teaching Museum, is available now through the gallery or the museum ($40.00 - US postage included).

Dona Nelson moved to New York City in 1967 to participate in the Whitney Independent Study Program. She received her BFA from Ohio State University in 1968.

Espace Tajan exhibited Nelson's paintings in Paris in the fall of 2019, adding to a long list of widely reviewed solo shows at galleries such as Michael Benevento (Los Angeles), Cheim & Read, Michael Klein, and Rosa Esman (all New York); including a mid-career solo exhibition at the Weatherspoon Art Museum, Greensboro, NC, which was accompanied by a full color catalogue. Her paintings have been included in group shows at Thaddaeus Ropac, London, Morán Morán, Los Angeles, Ceysson & Bénétière, Luxembourg, as well as Deitch Projects, Lisson Gallery, Robert Miller, Mary Boone, Canada Gallery and d'Amelio Terras (all New York). Nelson's work is included in the collections of the Metropolitan Museum of Art, Guggenheim Museum, Pennsylvania Academy of Fine Arts, Rose Art Museum, Museum of Fine Arts Boston, Perez Art Museum, Kadist Foundation, Weatherspoon Art Museum, Albright-Knox and Art Gallery of New South Wales, Australia. Nelson's work is currently part of Taking Space: Contemporary Women Artists and the Politics of Scale at the Pennsylvania Academy of Fine Arts, Philadelphia, and Never Done: 100 Years of Women in Politics and Beyond at the Tang Teaching Museum, Skidmore College, Saratoga Springs, NY. Her work will also be included in 52 Womxm Artists: Revisiting a Feminist Milestone at the Aldrich Museum of Contemporary Art in Ridgefield, CT, scheduled to open in June of 2022.

Other events from Thomas Erben Gallery