Clara Nartey: The joy of Living 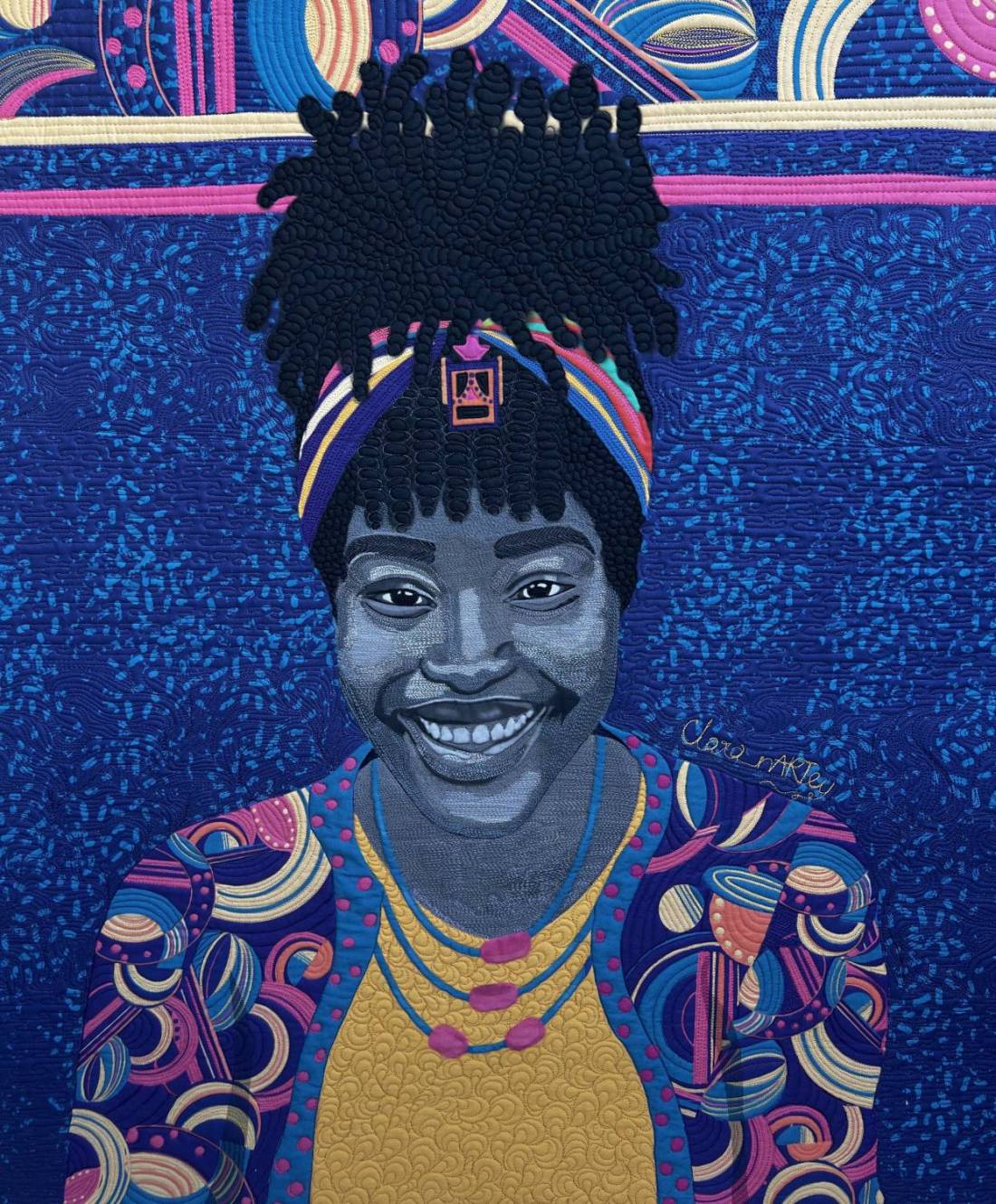 Heather Gaudio Fine Art PROJECTS is delighted to present “The Joy of Living,” an exhibition featuring new works by Clara Nartey. This is the artist’s first show with the gallery which will be on view December 1, 2022 – January 21, 2023. The public is invited to attend an opening reception on December 2nd at 5pm to coincide with the Holiday Stroll in New Canaan.

Nartey uses stitching and embroidery thread to create richly colorful and symbolic portraits of African American women. Born and raised in Ghana, Nartey moved to the United States with her husband, her artistic practice arriving in a circuitous manner. After earning her MBA, she worked in finance for several years. As a break from crunching numbers, Nartey explored her creativity with embroidery and stitching, skills she learned from her mother. The economic downturn of 2008 led to a shift in her career, which fortuitously allowed Nartey to delve deep into her artistic investigations with the sewing machine. What began as a creative pastime developed into an original artistic output generated by richly saturated works in thread and fabric.

At first, the self-taught artist created abstracted quilts and tapestries stitched in bright patterns with a palette that reflected her culture. Nartey’s lexicon became more immersive and personal when she turned to figurative work that questioned societal standards and expectations of beauty for women, particularly African American women. For centuries Eurocentric notions have dictated the acceptable aesthetic standards for women in society and more recently, in a professional setting. African women have had to conform to treating their hair with chemicals to meet these norms. Nartey’s personal journey with embracing her natural self was also a path to accepting her identity and authenticity. From this catharsis Nartey began depicting women in headshot portraits, donning them with elaborate hair styles, head dresses and wearing vibrantly colored fabrics. These are mighty works that achieve a level of impactful artistic sophistication.

Although stitchwork has traditionally been associated with domesticity bearing a less “significant artistic merit”, the medium is currently enjoying a revival and justifiably recognized as a valid fine art form. Nartey’s process combines this traditional medium with new technologies by starting out drawing her subjects and patterns on an iPad. She begins with line drawing, and always with the subject’s face. Initially the portraits were sourced from stock images, and today she depicts either historically famous personages or people she knows personally. Nartey then adds the hairstyle, clothes, decorative elements, and symbols that reveal a story. Once satisfied with the renderings, the artist prints them onto a large-scale canvas that becomes what she dubs the “underpainting.”

The canvas is then backed with 3-4 other canvases and thicker materials to bear the weight of the stitching and fabric collage to follow. With the use of the sewing machine, layers upon layers of embroidery thread are stitched over the canvas, coloring and shading the areas with the thin fibers. Although Nartey follows the colors and patterns printed in the underpainting, the process is as intuitive as it is improvised. At times she will deviate from the matrix allowing for chance to take place. Nartey never knows how or what type of stitching she will use until it is done. Her only stead-fast rule is to never undo a stitch. If a change needs to be made, she will embroider over it. For Nartey the stitching is another form of mark making. As an artist would use a pencil or a pen to generate a line, add a highlight or shadow, Nartey uses the thread, its direction and weight to render the desired values, contrasts, and textures. “My thread is my paint,” she states.

Nartey’s myriad decorative patterns on the clothes, backgrounds and headdresses are her own designs. Some are more graphic nods to Gee’s Bend quilts while others are reminiscent of the constellation-type motifs seen Gustav Klimt paintings. To these she layers further decorative stitching that is independent from the composition, as if to enhance the individuality to the portrait. Nartey estimates that each tapestry has over two thousand yards of thread. Additionally, the artist incorporates symbols to reveal the story of the sitter. Known as adinkra, these Ghanaian symbols are a writing system that represent various concepts used by the Akan peoples to mark fabrics and other surfaces. They tell stories, memorialize events and bear wisdoms that are part of the cultural identity. The vibrant interaction of colors, patterns and symbols in the works give them a distinctive formal energy.

The exhibition will feature works from The Joy of Living series, a grouping that was created around the time of the pandemic which had the artist question life, death, and her own mortality. These works celebrate life and being present in the moment. Dynamic portraits of women are depicted engaged in the fleeting joys of everyday life, as in the elaborate Breaking Bread.

Another dazzling work in the show is Queen Sissieretta, a portrait of Sissieretta Jones, the first African American woman to headline Carnegie Hall in 1892. Jones is adorned with medals she was gifted by her many international admirers and proudly wore during her performances. The singer encountered and fought racial barriers throughout her life and sadly became impoverished when she was forced to bow-out of public life to take care of her ailing mother. Nobody took notice when she died, and she was placed in an unmarked grave in Rhode Island. Nartey pays homage to the celebrated performer in a brightly attired portrait, reinterpreting the medals and placing them on her hair, much as an African queen would accessorize a regal headdress with gold. The background acts as a wallpaper, decorated with a pattern sourced from one of the medals and stamped with the singer’s life-time dates. Jones looks unapologetically at the viewer, self-assured in her place in history.

A more contemporary subject and Nartey’s first full standing figurative work is Dancing Queen. In this tapestry, the artist renders a young female figure in hip-hop gear and pose against a highly stylized background. She wears a pair of Nike sneakers the brand issued in celebration of the Ghanaian population living in the United States. The shoes are adorned with Sankofa, an adinkra which places importance on learning from the past. The right shoe features Nserewa, a signifier of wealth and abundance. Nartey uses the symbols borrowed and stitched by the American appropriated on the shoes, and reclaims them into her own work, a gesture underscoring her explorations of cultural identity.

Nartey is a SAQA (Studio Art Quilt Associates) member and lives and works in Connecticut. The artist has been the subject of several exhibitions including at the Visions Museum of Textile Art in San Diego, CA.  Nartey has been featured in various publications including Artforum. She also teaches and conducts workshops on the art of quilt making and embroidery.

Heather Gaudio Fine Art PROJECTS, is a venue designed to display artworks outside the scope of the gallery’s program. Through collaborations with artists, private dealers, and galleries in New York City and beyond, PROJECTS exhibits blue-chip, contemporary masters and site-specific installations. The aim is to diversify the art landscape and conversation, presenting collectors and the community with alternative engaging experiences and acquisition opportunities.