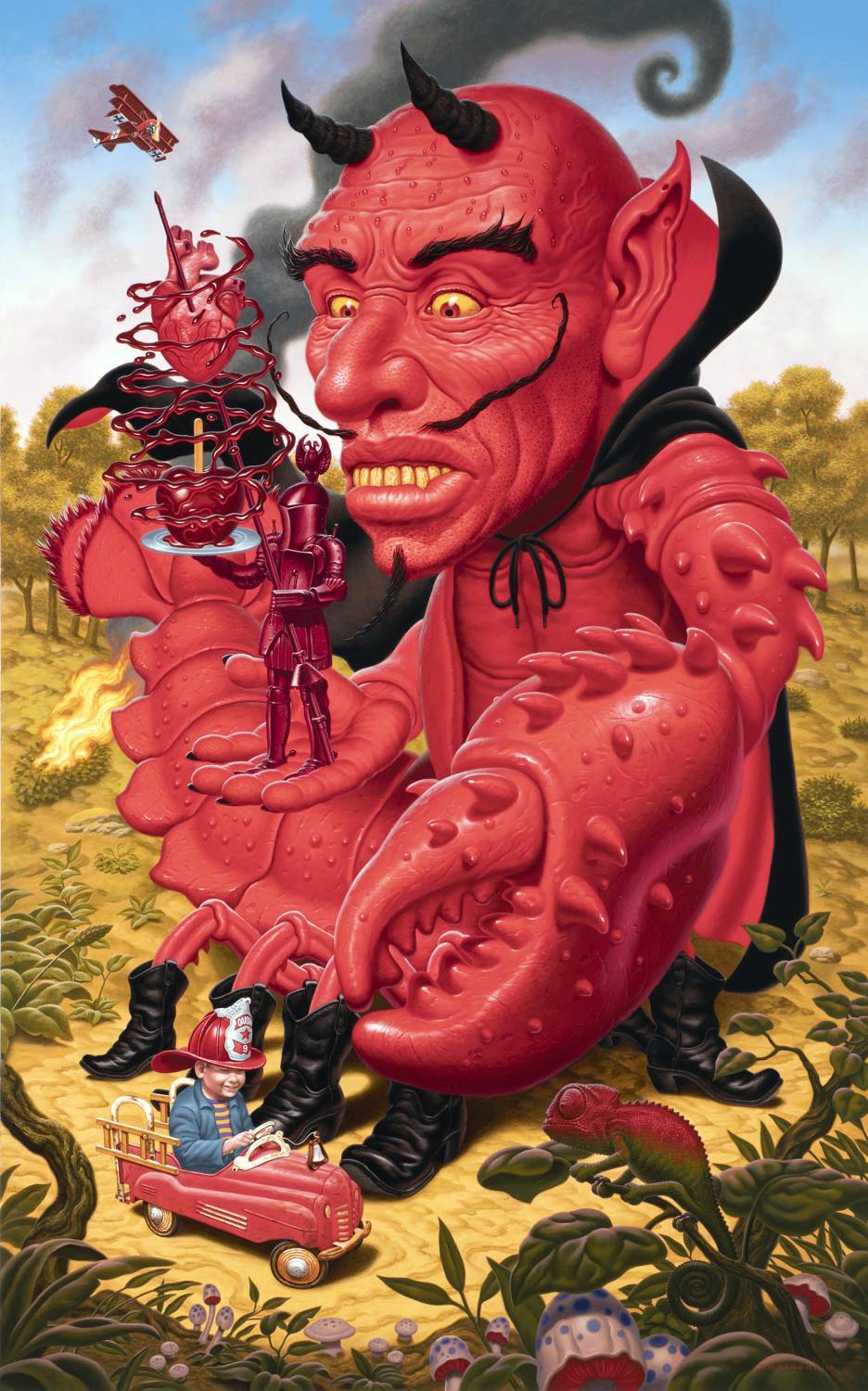 With recent exhibitions at The Crocker Art Museum in 2020, and Virginia MOCA in 2018, to Schorr’s epically received midcareer survey in 2009 at the San Jose Museum of Art, recognition by the museum world has only solidified what the gallery and collecting public had known for decades -- that Todd Schorr is a giant in the Pop Surrealism movement. Though he shares that group’s interest in Lowbrow culture and post-illustration / 'comic' graphic style, Schorr’s operatically ambitious compositions, rich in precise detail and evocative atmospherics, plus his particular flair for wry insight and social commentary, set him apart even among the genre’s best-known practitioners. With cinematic, fairy-tale carnivalism, lewd satire and sincere punnery -- Schorr confounds expectations with what critic Doug Harvey called “the willingness to pursue technical mastery and apply it in the service of the realization of extraordinary visions.” Inspired equally by Bosch, Brueghel, Dali, the edgier comic books of the 1950’s, and Ed Roth’s designs of the 1960’s, Schorr’s knack for provocative pop content laid onto Old Master technique presents a unique level of innovation in interpreting the world around us, serving as a platform for creative thinking that is truly omnivorous in its interests.

Schorr’s cast-of-thousands scenarios, heavily symbolic, rendered with a high 19th century paragon of stylistic considerations and compositional ambition for complex storytelling function as a means of communicating big ideas. From both religious and mythological cautionary tales and racy serial comics, Schorr borrows allegorical narrative strategies and a taste for social critique that is both telegraphed and ameliorated by the elegance of the awe-inspiring paintings he creates. Imagine the visceral aesthetic impact of a classical museum space lined with Schorr’s monumental works, luminous and brooding, four and five feet across and bigger, even mural-size, in the ornate frames that signal the high-art mood, in that Renaissance style that slowly reveals itself as trading in the stuff of modern life. Such a spectacle would surely make contemporary art, and the academic art-historical discourse, both exciting and accessible to a broad variety of audiences, and provide passage to a deeper curiosity in education about both history and technique. Just as Schorr himself was inspired as a child by fresh and boundary-blurring voices in visual art, he could ably pass along that experience of wonderment for a new generation of scholars, young people, and the curious-minded of all ages.

With the world in a precarious state of flux, the observant artist has ample paths of investigative thought to stoke one's imagination.  For myself, being a student of history , science, and social behaviors, the past few years since my last exhibit of new works has provided me with an abundance of inspiration.  The  over riding theme of which appears to be the absence of good old common sense being replaced with the preference for moronic backward thinking.  With no strong moral compass presently in the hands of,  to put it delicately , a confused and anti-visionary leadership, our world seems headed towards dark and unenlightened times.  My hope is that the world will get its' proverbial head out of it's ass before it gets any worse.  I ask, what  happened to common knowledge?  Lack of good basic education seems to me the culprit that has brought us to this.  When I hear a high school graduate being asked who was the first person to walk on the Sun and they give a straight faced answer that someone ( their choice ) has actually walked on the Sun, it's plain to see we're in trouble.  You realize how so many can be suckered into the myriad cults and conspiracies running rampant these days.  These various frustrations work their way into my paintings but I try to still offer a sense of humor along with the absurdity of it all.  As the show title implies, rattlebrained perspective mixed with the melodrama of life's existence, will hopefully  pique the interest of the inquisitive viewer.

Todd Schorr was born in New Jersey and moved to Los Angeles in 1999. As a child, he showed a compulsion for drawing at an early age and was enrolled in Saturday morning art classes by the age of five. Deeply affected by fantasy movies such as the 1933 classic King Kong and the early animated cartoons of Walt Disney and Max Fleischer, their influence along with comic books such as Mad would have a lasting effect on Schorr’s developing visual vocabulary. While visiting the Uffizi gallery in Italy on a trip to Europe in the summer of 1970, Schorr began to formulate his idea of combining his love of cartoons with the techniques of the old masters.

In 1972 he entered the Philadelphia College of Art (now the University of the Arts) wanting to be a painter but was advised to pursue illustration. Schorr started professional illustration work while still in college, and soon after graduating in 1976, he moved to New York City where he produced work for projects including album covers for AC/DC, movie posters for George Lucas and Francis Ford Coppola, and covers for Time magazine that now reside in the permanent collection of the Smithsonian National Portrait Gallery in Washington, DC.

By 1985 Schorr was living in Connecticut, and while there made a conscious decision to break away from illustration completely, and focus solely on fine art painting. He was invited to show work in the 1986 landmark exhibition American Pop Culture Images Today at the Laforet Museum in Tokyo, Japan, along with notable artists Robert Williams, Suzanne Williams, Neon Park, Bob Zoell, Georganne Deen, Mark Mothersbaugh, Gary Panter, and his wife Kathy Staico Schorr, which helped galvanize the “Lowbrow” and Pop Surrealism movements on an international platform.

Other notable exhibitions include In the Land of Retinal Delights:  shown at the Laguna Art Museum as part of The Juxtapoz Factor and Designed for Extinction, 2010, Otis’ Ben Maltz Gallery, Los Angeles, CA.