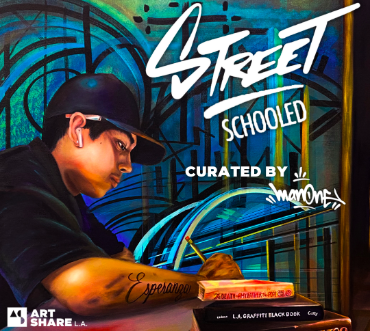 A special opening reception will take place on December 17th, with a VIP preview from 5PM-7PM open to Art Share members, and public opening from 7PM-10PM.

These emerging and established LA based artists are inspired in one way or another by the streets of LA. The emerging artists are sharing the gallery walls with several more established creators by whom they’ve personally been influenced. These more mature masters of their craft have also influenced countless young painters, graffiti artists and muralists throughout the city over the last few decades. They are respected as street mentors by many. The exhibition aspires to showcase the surfacing talent of these emerging artists while giving flowers to the living maestros that came before them.

Man One is an L.A. native, multi-award-winning artist, illustrator, curator, entrepreneur, and prolific muralist. His work is in collections at the Getty Research Institute and the Smithsonian Institute. He has exhibited extensively across the U.S., Australia, Germany, New Zealand, Mexico, United Kingdom, Japan, and Switzerland. He also founded Crewest Gallery in 2002, Los Angeles’ first full-time graffiti art gallery which later helped shape the Downtown L.A. art scene as a member of Gallery Row and the infamous DTLA Artwalk.

Jesse Fregozo is a native Angeleno who primarily works as a painter. He vocalizes the struggles of marginalized communities through the representation of identity and culture as a primary focus. Fregozo uses locations around his community as symbols of identity and a cultural lifestyle that has been carried down generation after generation. Fregozo straddles the line between design and pop culture in the development of his work. His intense works on canvas, paper, photography, and design are mediums for the development of his artwork.

Jacqueline Valenzuela (b. East Los Angeles, CA) received a BFA in Drawing and Painting from California States University Long Beach (2019). Her work has been exhibited throughout the greater Los Angeles area, including the South Gate Museum (South Gate), Brea Gallery (Brea), South Pasadena City Hall Gallery (Pasadena), The Mexican Center for Culture and Cinematic Arts of the Mexican Consulate (Los Angeles), ArtShare L.A. (Los Angeles), and most recently at Flatline Gallery (Long Beach) for, “Sitting on Chrome” an exhibition curated around the theme of exploring the different artists who have interconnected their art practices with their passion for lowriding. Valenzuela is a multi-media artist whose practice is centered around her experiences as a woman within the Chicano world of lowriding.  Her art practice reflects the deep roots she has planted in the lowrider community by bridging the gap between fine art and this underrepresented community

Randy de Leon, a.k.a. REBORNZ, is a native of Los Angeles, California, who picked up the love for art at a very young age; he drew funky animals ever since he was a kid. As a young adult in the late 90s and early 2000s, he explored every opportunity to express his creativity in the form of Graffiti in the street art scene. REBORNZ was a rebirth name. He used to be known by an old street name which doesn’t matter as it only represents his old life. To pursue his career and gain recognition for his art, he didn’t exactly lead a very smooth life and he got into trouble a lot of times while trying to express himself; From hanging around with a Los Angeles tagging crew to slipping out at night to cover the streets with his art, getting guns pulled on him by gang members or shop owners, searched by police, falling off roofs among many unimaginable things. It got so serious that he got himself jailed, where he got the chance to meditate on how to lead a decent path and be a better artist that people could look up to. This triggered him to create a new identity for himself and strive for other means to survive and maximize his creativity. Hence, he made up the name ‘REBORNZ’ in 2004 to indicate that he wants to leave the past behind and discover a better way forward. Luckily for him, he developed his art and graduated with a degree in communication arts.

Mary Lai is a Los Angeles based visual artist & designer with a B.F.A. in Graphic Design.  She creates vibrant contemporary artwork that has been exhibited worldwide. Her scope of work includes paintings, mixed media art, digital art to large scale murals and installations.  With nearly 20 years of art/design experience from fashion accessories to fine art, Mary has worked with several notable brands, clients and projects. She continues to refine her craft and explore what it means to create art in the physical and digital world.

Born and raised in East Los Angeles, John Zender Estrada experienced a rich and diverse cultural environment drawing from the strong personalities of the Chicano youth around him. At fifteen he lived in Mexico City where he gained a love and respect for Los Tres Grandes, the famous Mexican muralists Diego Rivera, Jose Clemente Orozco and David Alfaro Siqueiros. He attended Otis Art Institute majoring in Fine Art and Illustration. John was influenced by the New York art scene, primarily the abstract-graffiti-pop expressionists. Actively involved in establishing the Los Angeles style of graffiti art, John was one of the many early pioneers that created the graffiti movement in the early eighties. John recreated himself as Zender One (the rising mountain) and had his first one- man show at Otis titled "Zender-Neo Expression" in 1987. He would begin his professional art career with the graffiti art on canvas. His work has been exhibited at the Museum of Contemporary Art, Zero-1 Gallery, CSDI, ICU Gallery and many others. He has had several one man shows and many group shows, exhibiting with many other well-known Graffiti artists such as Retna, Chaz, Mear, Futura 2000, and many others. Deeply committed to making public art Zender has produced over 300 murals in Los Angeles and throughout the United States. He created many brush murals in East Los Angeles which led him to create a large body of Chicano art. Exhibiting with David Botello, Wayne Healy, Vladimir Cora, George Yepes and many others. John Zender Moved into yet another art genre of Spiritual Abstractions in 2007 and was represented by a gallery in Whittier CA.

Obed Silva is an Assistant Professor of English at East Los Angeles College. For the past four years, however, he has been refining his skills as a painter. Currently, he paints out of the Homeboy Art Academy in Boyle Heights under the instruction of master muralist and painter Fabian Debora. Obed’s paintings have been exhibited at the dA Center for the Arts, Brea Gallery, Able ARTS Work among other art venues.

Showzart, known as “The Art Jedi”, has been in love with art since a very young age and started learning about public art through graffiti and tagging in South Central, LA. At 13 he created his first mural and has never looked back. He is one of the most well known muralists in the Los Angeles area and believes that art is and should always be for the community. Showzart chooses to remain anonymous and lives in Skid Row where he works tirelessly to elevate the Skid Row community. Throughout his work he chooses to represent those among us who are underrepresented in art and media, thus giving a voice and a face to those who may not have the means to speak for themselves.

Fabian Debora was born in El Paso, Texas and raised in Boyle Heights and  began his career in 1988 as a graffiti artist 1995 as a member of the East Los Angeles Streetscapers. He was mentored by many Chicano artists and muralists.

EL MAC is an internationally renowned artist born and based in Los Angeles. He began painting both smaller indoor works as well as public murals and graffiti in Phoenix in the mid 1990s, and since that time has developed his unique visual aesthetic and rendering style which utilizes repeating contour patterns. His work draws on influences from classical European art, social realism, symbolism and devotional art, as well as the Chicano and Mexican culture he grew up around. He is best known for his meticulous paintings and large-scale murals exploring feminine beauty and honoring ordinary, overlooked, or marginalized people.

Paul Botello was born and raised in East Los Angeles. Paul Botello is the brother of East Los Streetscraper co-founder, David Botello. His involvement with art began at the age of 8, helping his brother work on murals (David Botello, or East Los Streetscapers). He went on to earn his BA and MFA at UC Los Angeles. In 1997, he was a visiting professor at Pitzer College in Claremont. In 1994 he traveled to Berlin, Germany where he collaborated on a giant mural titled “Global Chessboard.” He continues working on murals both in Los Angeles and abroad. He considers his work as symbolic narratives exploring both personal and public issues. He most often brings his distinctive personal style of energy, color and composition to focus on social issues.

Wayne Healy (born 1946) grew up in East Los Angeles, where political events in the 1960s stimulated his commitment to execute socially and culturally relevant public art. In the third grade he collaborated on a dinosaur mural with David Botello. In 1975, the two ran into each other after many years, and Healy and Botello co-founded what became the mural team known as East Los Streetscapers. In 1992 Healy and artist Roberto Delgado were awarded a grant by the Joint Spanish/U.S. Committee for Educational and Cultural Cooperation to paint murals in Barcelona, Spain. They have created murals and public art works throughout the United States, Europe and Mexico with traveling exhibitions including “Le Demon des Anges”, “2001: Hispanic Artists’ Odyssey,” and “Chicano Codices,” Mexican Museum, San Francisco, California. Healy’s work was also featured in Chicano Visions: American Painters on the Verge – a traditional art exhibition presenting the works of a wide range of the country’s Chicano and Chicana artists.