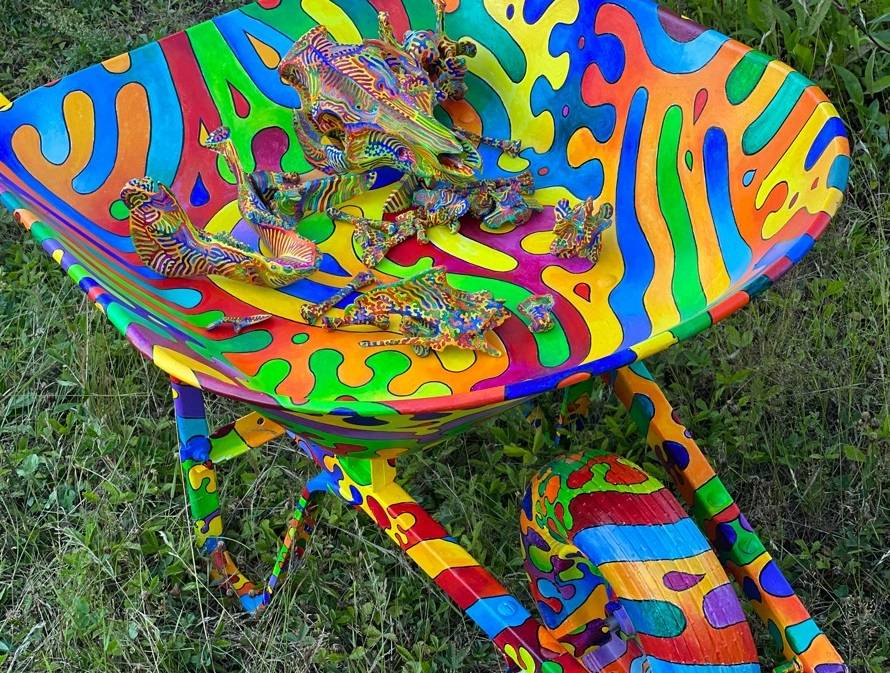 October 1st 2022, Romayne Dawnay will exhibit The Dancing Bones of St. Francis and other new works at the Creative Connections Gallery, 56 Main Street, Ashburnham MA.
'Dancing Bones' is a colorful transformation of bones, saluting Francisco de Zurbaran’s 17th century painting of the saint in the collection of the Milwaukee Art Museum.  “My bones and barrow are a far cry from Zurbaran’s memento mori, but  I think of them both as a reminder of the importance of life,” said Dawnay.  “It’s not so much the death and dying as life and living.” The title is a play on the 13th century book The Little Flowers of St Francis. Also exhibited for the first time are paintings, drawings and other objects.

Born in Compton Bassett, England, Romayne Dawnay spent her early childhood in County Waterford, Ireland.   She was educated at The Oxford School of Art and Hornsey Art School, London.

She has worked in Rome on film sets at Cinecittà and as an archaeological draughtsman on numerous sites in Italy and the Middle East.   Her drawings appear in the journals of the British School at Rome, The British Institute of Persian Studies and numerous American and Canadian academic publications. A painter since she was three, her work has appeared in group gallery exhibitions in London, Rome and New York.   A solo exhibition was held at the Piers Feetham Galley, London.   A children’s book, The Champions of Appledore, which she wrote and illustrated, was published by Macmillan.

She lives with her husband by a lake in Ashburnham, Massachusetts. Their home is shared with a porcupine.

Other events from Creative Connections Gallery