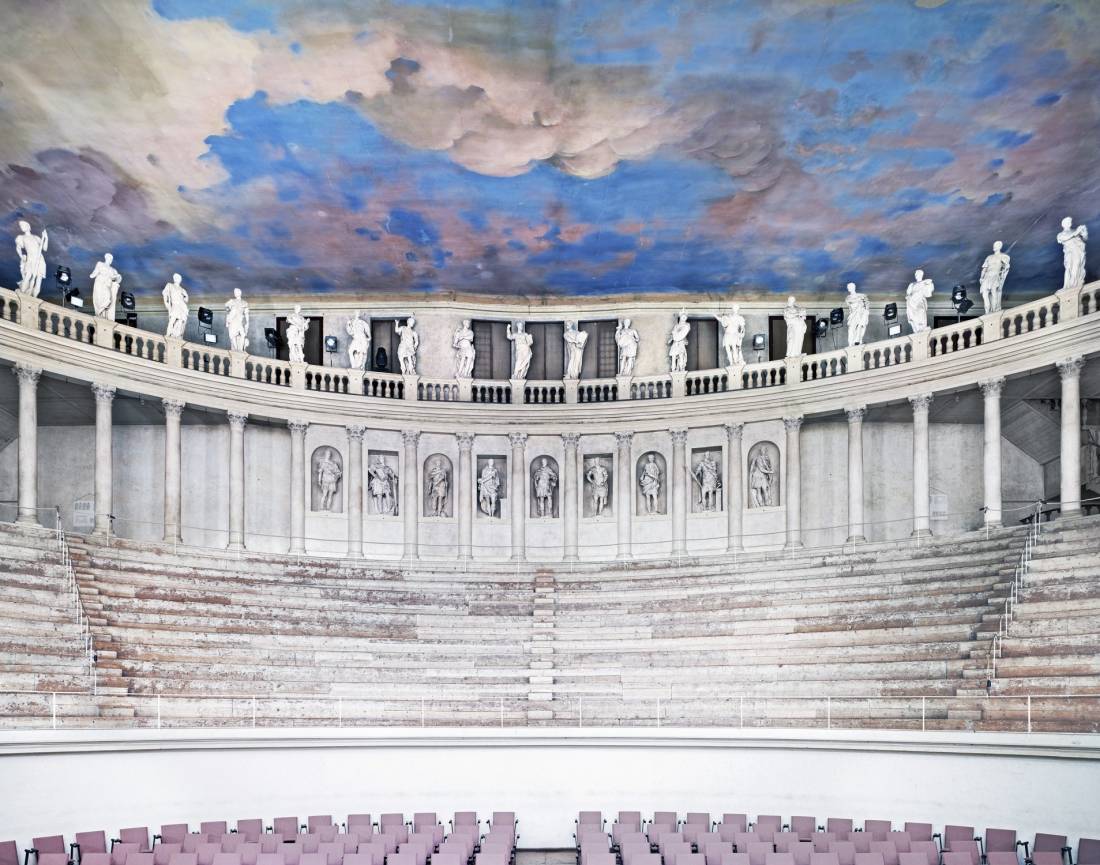 Ben Brown Fine Arts is honoured to announce Libraries, Museums and A Theatre, an exhibition of selected works by legendary German artist Candida Höfer. This is the artist’s eleventh solo exhibition with Ben Brown Fine Arts, and eighth solo exhibition at the London gallery. Opening on the 22nd of November, the retrospective presents a selection of quintessential, spectacular photographs of libraries, museums and a theatre, variously located in Austria, England, France, Germany, Ireland, Italy and Russia. These works illustrate her unique ability to capture public spaces that have been deprived of their status as public due to the devoid of human presence. Consequently, there is a sense of looking into an illicit moment or space, whose architectural splendor can only be entirely recognized when in solitude.

Amongst the photographs in the exhibition is Villa Borghese Roma I 2012. The photograph features an extraordinary interior of historical importance, as the sculptures situated on the blue plinths were first owned by Galleria Borghese, sold to French collectors, and then loaned by the Louvre to the Galleria. Therefore, Höfer has captured the statues in their initial environment, a true testament that her photographs are not documentaries of daily life, but instead capture the essence and history of a space, in its isolation.

Also included in the exhibition are two works from Höfer’s Louvre series, executed in 2005. The Louvre is now a tourist attraction that sees millions of people come through its doors every year, however, in the works shown in this exhibition the two rooms are deserted, a rare site, as Höfer was granted permission to photograph the interior when it was closed to the public. The effect of the large-format photographs is a rare combination of intimacy and scale, in which celebrated Western artworks enter a reticent though articulate conversation with the architectural setting, without surrendering the sense of space and civilised order. Höfer exhibited these works at the Louvre in 2007, in an exhibition entitled Candida Höfer, Le Louvre.

Höfer ‘portraits of interiors’ capture mankind’s greatness, as the empty spaces are associated with cultural and historical memories that are both in the present and in the past. Marsh’s Library Dublin I 2004, for instance, is a photograph of what is considered the first public library in Ireland, which opened in 1707. The astonishing details that are brought forth in her works are a direct result of Höfer’s working method, as she produces photographs using long exposure and working solely with the existing light source. This is witnessed in this work, as the natural light floods into the library from above, which highlights the early Enlightenment architecture and decorative gilded gables that embellish the dark oak bookcases, all in their original state. The library’s historical significance is also present, as the pictured bookshelves have bullet holes from the Easter Rebellion that occurred in Ireland in the twentieth century.

Through Höfer ’s lens, the selected works in the exhibition illustrate her exploration of the psychological effect of architecture. Correspondingly, Höfer exquisitely manages to capture the institutions’ architectural grandeur and history.