when i was walking on the edge of a teacup 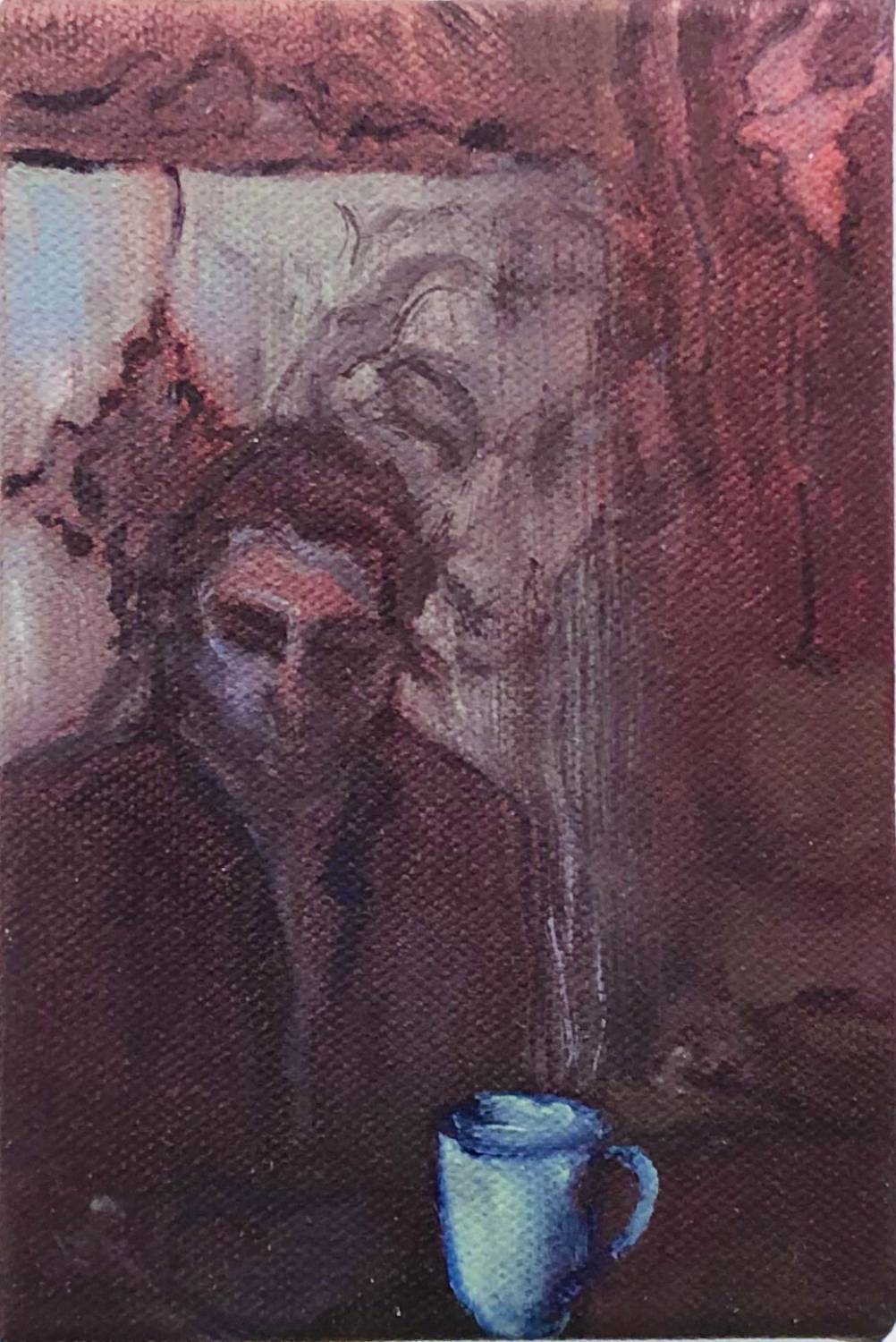 Roman Road is delighted to present when i was walking on the edge of a teacup, a group exhibition bringing together works by a new generation of emerging artists exploring the uncertainties and fragilities of life. Carefully selected by Roman Road’s creative director, Marisa Bellani, the five artists have each created new and unique paintings that will be shown alongside a poem written by Sonny Hall, exploring the interconnection between art and words within a space where sensuous and emotional visual dialogues converge.

The exhibition takes its title from a conjured feeling of constant tension, captured in the idea of watching an equilibrist walking along the edge of a giant china teacup, balancing precariously above the dangers of falling either side, onto the breakable surfaces of both saucer and cup. Bordering between the abstract and the gurative, capturing light and intense emotions, the exhibited works evoke the changeable and ambivalent nature of our lives, being uneasy at times and exhilarating at others. Capitalising on the dualities of light and darkness, stillness and movement, a tangible sense of instability echoes throughout the display, with each piece embodying its own distinct choreography.

As visitors enter the space they are immediately confronted with The Ventriloquists Denial (2022), the specially commissioned poem by Sonny Hall, with sections selected by the artists reproduced as a site-specific piece on the gallery walls. Igniting readers’ imagination through figurative language and vivid imagery, his words paint an affecting picture as viewers proceed on a journey, as he writes, “into the mouth of migrating speech.”

Using fine colouring pencils, John Fou meticulously creates highly contrasting and graphic works that show us a glimpse of a fantastical realm of his own making. His former years working in a circus and as a dancer are almost palpable to see here as otherworldly characters, mythical and vibrant creatures emerge as he beckons figures from his dreams to cavort with the borders of reality. Drawing on the verses of an inner world, Fou’s ultra-contemporary pieces manifest emotions through an absurd yet attracting visual storytelling, where one can easily lose oneself in the shimmering and hyperreal details.

In between painting and drawing Alina Vergnano’s work teems with cursive lines, abstract traces of the female body and limbs which unfold in poetic entanglements across the canvas. Through the artist’s hand these lines have become at once solid and blurred, fluctuating as a distinct yet merging intersection of the corporeal with the empty space, existence with nonexistence. Vergnano draws on the contrasts between the filled and white spaces of her supports, investigating the convergence of the inner and the outer and examining the flowing and transformative nature of human emotions and experience.

The feeling of fluidity and movement is echoed in Minh Lan Tran’s work, for which she uses the materiality of words, paint and organic matter to create highly tactile and layered artworks that manifest her bodily actions. For Tran, the act of painting is a channel for outward expression, a media for embodiment where her innermost mental and physical states unfold as preverbal communication. There’s a palpable sense of tensity and turbulence in her works; coats upon coats of paint and raw materials are progressively built up then subsequently abraded and incised, evolving through the artist’s gestures and exploring myriad sensations and dimensions of being.

Working with a contrasting and luminous palette, Harriet Gillett’s work draws our eyes into a realm of reverie through her signature use of fluorescent pink spray paint emerging from the base of her composition. At once demonstrating nostalgia for a bygone era and inquisitiveness for the social behaviours of today, her works manifest multiple perspectives and narratives, combining traditional subjects with contemporary materials as she cultivates a fluid and somewhat facetious way of exploring her psychosomatic interactions with our increasingly digitalised world. The negative spaces in Gillett’s paintings play an equally important role to her murky figures, with every inch of the canvas being used to convey a certain atmosphere.

In a similar vein, Channatip Chanvipava aims to create an immersive experience with his paintings, working to communicate the ambience of the emotions defining his subject. His typically large-scale works present snapshots of psychological states derived from past experiences, employing the medium of painting as a linguistic tool for self-expression. Teeming with bold and gestural brushstrokes, Chanvipava’s abstract piece exhibited in when i was walking on the edge of a teacup revisits a memory of him standing in the middle of a vast desert, using redolent colours and expressive forms to transpire a moment of transcendence and liberation.

when i was walking on the edge of a teacup serves as an introduction to Roman Road’s 2023 programme of exhibitions. This year the gallery intends to shift its focus to more group exhibitions, promoting a sense of community and togetherness for artists that are self-taught, still at school or have recently graduated. We aim to bolster both local and international emerging artistic talent through multidisciplinary and thematic exhibitions, alongside a varying programme of collaborative talks and events.

Other events from Roman Road