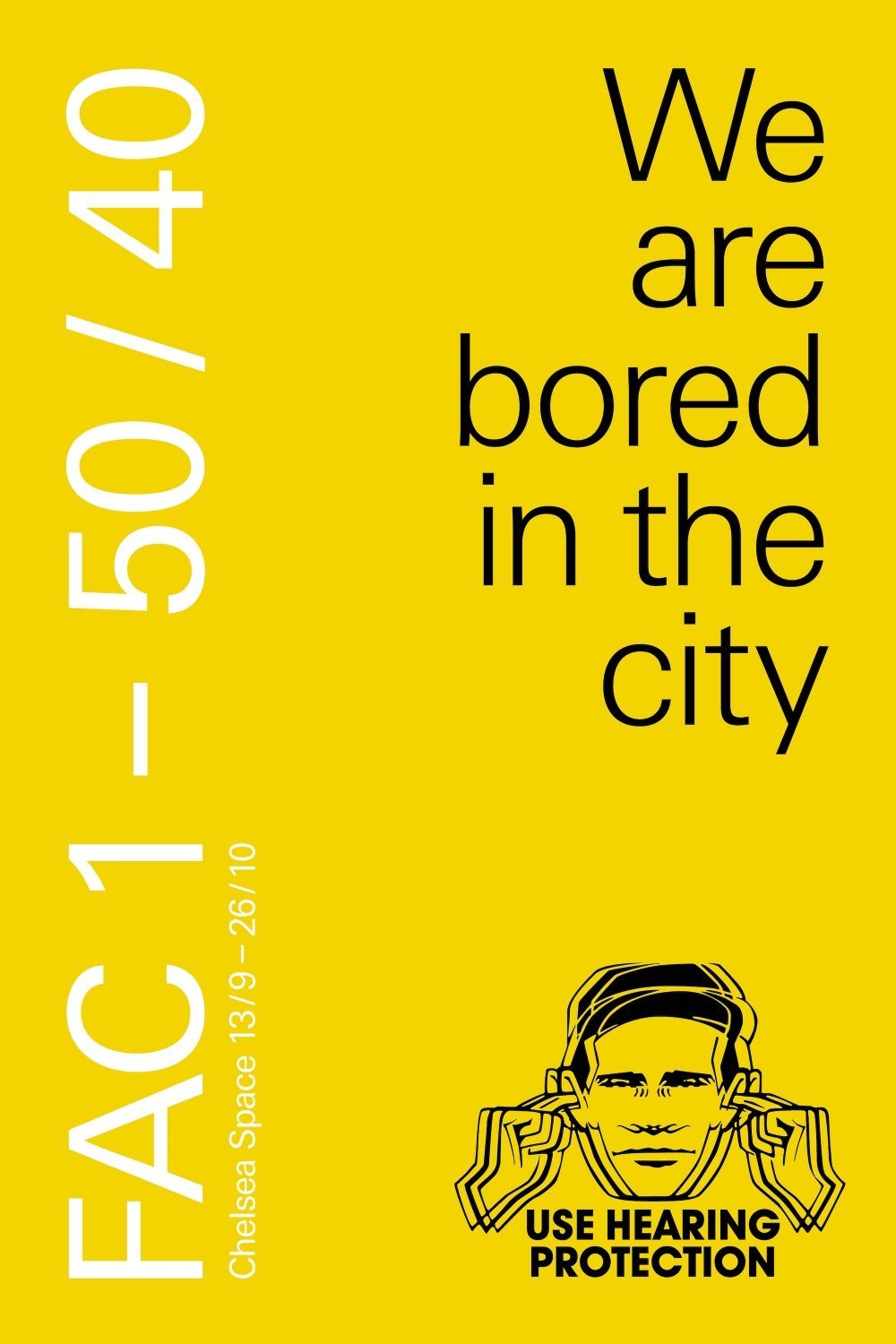 Curated by Jon Savage and Mat Bancroft, Use Hearing Protection tells the story of Factory’s formative years from 1978 to 1982 through the first 50 numbered Factory artefacts, including works by Peter Saville, Joy Division, New Order, A Certain Ratio, Durutti Column and Linder Sterling.

Supported by rare and unseen materials from personal Factory archives, as well as non-Factory period items of influence, these combine to describe an era and atmosphere from which Factory was proposed and realised, underpinning its revolutionary cultural impact on the music, art, design and ideas of our times.

Factory Records was formed by Tony Wilson, Alan Erasmus and Peter Saville in 1978. In January 1979, A Factory Sample (FAC 2) was released: this striking double EP, was wrapped in a Peter Saville designed gatefold metallic silver sleeve, heat sealed in polythene and playing at 33rpm. A Factory Sample featured audio from Joy Division, Durutti Column, John Dowie and Cabaret Voltaire. This release was a founding moment of Britain’s independent music sector as well as a vital artefact in the history of pop culture.

Factory Records was an independent record label, formed in Manchester by Tony Wilson and Alan Erasmus in January 1978. Starting as ‘The Factory’, a new wave live music night, it developed into an independent record label in late 1978. Joined by graphic designer Peter Saville and producer Martin Hannett, the label launched with a double 7” EP A Factory Sample released in January 1979.

Prominent early acts included A Certain Ratio, Durutti Column, Orchestral Manoeuvres in the Dark and Joy Division, whose debut album Unknown Pleasures was the first long player on Factory. The band became central to the label’s success and Joy Division’s manager Rob Gretton joined as the 5th Factory Director. After the tragic death of Joy Division singer and songwriter Ian Curtis in May 1980, the band evolved into New Order.

In 1982 Factory opened The Haçienda, a music venue and nightclub with a revolutionary industrial design identity by Saville and architect Ben Kelly. The club was at the heart of the acid house and dance music scene of the late 1980’s and early 1990’s.

Throughout the 1980’s Factory signed many diverse and important bands including Happy Mondays, James and Electronic while also expanding into classical music.

Factory closed in 1992, but its legacy of creativity, superior art and design and as a home to some of the most important and influential UK bands - all catalogued in Factory’s unique numbering system - sets it apart as the most vital independent record company of the past 40 years.