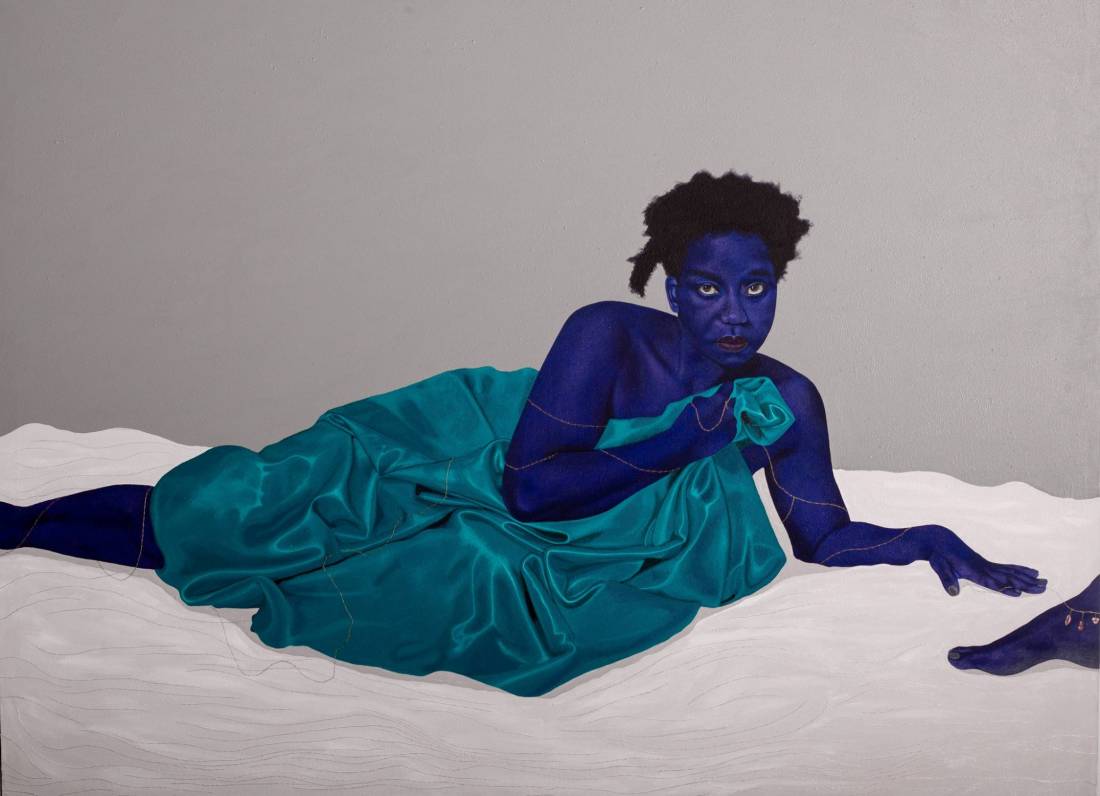 “Indigo for a skin tone in my work signifies a tribe, a breed of black, a people that are not limited to social, economic, cultural, political or historical constraints.” – Stacey Gillian Abe

Unit London presents Shrublet of Old Ayivu, the first UK solo exhibition from Ugandan artist Stacey Gillian Abe. An exploration of memory, time and emotion, this new body of work focuses on the concept of shared memory. In Abe’s striking, hand-embroidered paintings, she examines how memories have been passed down through her own family lineage, alluding to the ways in which traditions are absorbed and transformed from generation to generation.

In Shrublet of Old Ayivu, these concepts are represented in the jute plant and flowers detailed in various paintings. A totem for the Ayivu clan – one of the six clans in Arua in the West Nile Region of Abe’s native Uganda – this fibrous plant appears as a small shrublet in sections of embroidery that adorn her paintings, becoming a motif that connects each canvas. Bold and richly hued with blues, golds and champagne tones, the large-scale paintings and their life-sized subjects confront the viewer, inviting close study and observation to reveal a multitude of intricate new details and discoveries at every turn.

Notable throughout this body of work is Abe’s central use of the colour indigo to depict her figures’ skin. In African tradition, indigo is a celestial colour that links the human and the divine, as well as a symbol of protection, with newborns wrapped in an indigo cloth. Often referred to as ‘blue gold,’ the rich dye holds an important place in African history, and Abe’s use of the colour in her exploration of generational memory is particularly poignant. Playing a seminal role in centuries-old textile traditions in West Africa, indigo was introduced to East Africa through the exchange of textiles, facilitating the East African slave trade, as indigo-dyed fabric would be exchanged for the human body.

“It was used literally as a currency. They were trading one length of cloth, in exchange for one human body.” Catherine McKinley*

Abe’s work is interested specifically in how far this history has seeped into the present day and the dominance of indigo in her oeuvre allows her to subvert its symbolic significance, allowing the black body to be seen in a different light. In works such as The Sitting 1, the reclining figure’s gaze is direct and powerful. Draped in luscious azure cloth, the image evokes notions of the classical image of the reclining Venus. In Abe’s paintings, however, this motif is challenged by the use of the bold indigo and she calls to question the position of a black woman’s body within the painterly space, and within art history.

In Shrublet of Old Ayivu, Abe also demonstrates her fascination with indigo through its connection to cloth and material, and the relationship cloth has to the body. Through delicate embroidery and depiction of cloth as strong visual elements throughout this body of work, Abe revisits the traditional, historical and personal significance her native culture ascribes to cloth and colour.

“We are born to be clothed, and buried in cloth. Cloth is not just a status symbol but also a symbol of dignity.” Stacey Gillian Abe

Embroidery features as a symbol of femininity throughout the exhibition as a craft traditionally practised by women. It also carries personal resonance for Abe as a skill that has filtered down through generations of her own family. In the paintings, embroidery appears as a delicate process of hand stitching, with patterns sewn directly onto the canvas with silk thread. The process also becomes a moment of meditative dialogue – inspired by her memories, experiences and interactions, the idea of freedom comes into play and is expressed through her paintings, where the canvas becomes a place of escape.

Throughout Abe's works and the concepts they explore, there is an effort to review conventional depictions of her as a black woman, by drawing focus to the mind’s suppleness. Scenes seemingly drawn from earlier and continuous experiences materialise as imaginary spaces that impart a surreal essence to the work as it probes unsettling narratives on the subject of identity, gender, spirituality and cultural mysticism, the past and present.

Bringing an immersive element to the exhibition, certain paintings are also heightened sensorially – emanating with evocative, nostalgic sounds – including some of the classic African songs the artist grew up listening to with her mother and aunt in the 1990s, and the hum of crickets and frogs taking over from the birdsong at dusk.

In this way, Shrublet of Old Ayivu questions how memory can be shared and explores the transference of abstract recollections, such as memories of emotions and feelings – subjects not easily explained through visual means. These notions take shape within the space of the canvas itself, forming as if from the subject’s own consciousness. Each painting tells a different story, becoming part of a tapestry of interwoven threads, a narrative running from work to work. Always leaving room for interpretation, Abe allows her viewers to be drawn into each piece, and to come away with their own sense of meaning. And so, in this labyrinthine body of work, we are beckoned forward to find the stories, and to follow their strands as they twist and turn, connecting and disconnecting – like the tendrils of a shrub, winding up the trunk of a tree.

*Catherine McKinley, “Indigo: In Search of the Color That Seduced the World”

Stacey Gillian Abe was born in Kampala, Uganda, in 1990. She received her BA in Art and Industrial Design from Kyambogo University, in 2014. Abe went on to present her work internationally at museums, galleries, fairs and biennales.

In 2022, Abe will present her debut solo exhibition in London, titled Shrublet of Old Ayivu. Unit London will showcase Abe's work at Expo Chicago in 2023. The artist has been featured in publications including The Independent and The New York Times. Along with her numerous awards, in 2018 Abe was listed among the Forbes Africa 30 under 30 Creatives. She currently lives and works in Kampala, Uganda.