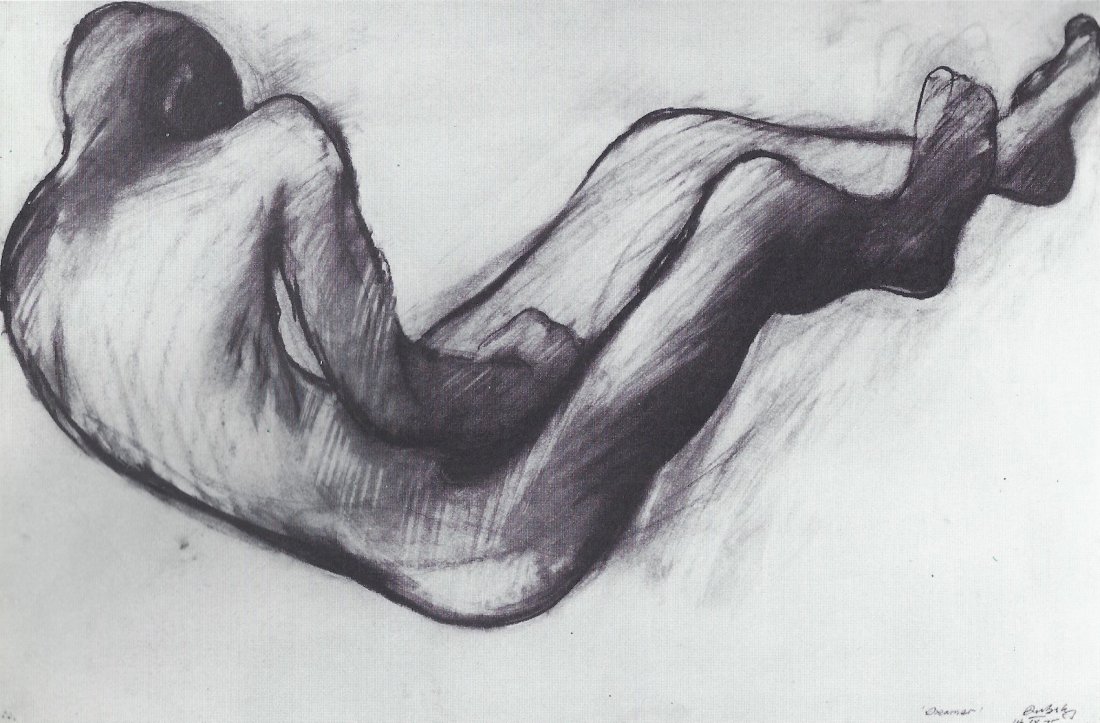 CHELSEA space presents an exhibition of paintings and drawings by the influential artist and educator Mario Dubsky (1939-1985). Including material from all the phases of his working life, the show will explores his quest for a powerful visual language with which to express his ideas as a gay man and artist.

Dubsky described himself as ‘zeitgeist’— a spirit of his time. Born in London just before the outbreak of the Second World War, his parents were newly arrived refugees from Vienna, with roots in both Slavic and Jewish heritage. Reflecting his entangled cultural background (in addition he and his parents were baptized), his early paintings were dark, heavily wrought, expressionistic and haunted by images of the Holocaust, Hiroshima and Guernica.

Studying at the Slade School, Dubsky fell under the influence of the late work of David Bomberg through his friendship with the mature student, Dorothy Mead. His studies were further broadened by travel in Greece and Italy, where he added the classical and mythological Mediterranean into his lexicon. With further travels through Istanbul, Aleppo, Damascas, Palmyra and Jerusalem, Dubsky interwove the Jewish, Arab, Christian, Greek and Roman worlds into his creative imagination and personal mythology.

Confirming his own identity as a homosexual, Dubsky found his subjective approach to art making at odds with the dominant idioms of abstraction and Pop Art. It was only when he moved to New York at the end of the sixties that Dubsky would engage with the emergent gay rights movement that was exposing inequality through the Stonewall Riots against anti-gay legislation. This movement stood alongside the continuing Civil Rights Movement and anti-Vietnam protests that exposed the divisions within life and politics in the US.  Deeply affected, Dubsky made a large photomontage mural for the Gay Activists Alliance building in Soho, New York in 1971, and these experiences would affect the path his practice took for the rest of his life.

By the mid 1970s, moving between New York, where he attended life drawing classes at the Studio School and London, where he taught at Camberwell School of Arts and Crafts, Dubsky immersed himself in drawing — inspiring a willing group of students (including CHELSEA space Director, Donald Smith and co-curator David Ferry) with his energy and intensity. Drawings of the male figure he made at this time were not merely anatomical studies, they were declarations — poetic, political, erotic, metaphorical and allegorical. Responding to the blasphemy charges brought against the underground magazine Gay News in 1977, for the publication of a poem concerning a homosexual Roman Centurion’s love for Christ at the crucifixion, Dubsky produced a book of poems and drawings entitled Tom Pilgrim’s Progress Through the Consequences of Christianity (1981). These works again confirmed his commitment to publically declaring his resistance to sexual and political suppression (of any kind), through his art making.

Uncompromising to the point of being described as obtuse and antagonistic, Dubsky’s candid declaration of his sexuality combined with the complexities of his background, often left him excluded from the art world of the time. Again, drawing on these experiences informed the title for his solo show at the South London Art Gallery (now South London Gallery) in 1984. The title, X Factor, a reference to the Greek form xeno, meaning ‘stranger’ or ‘unknown quantity’, was to become a poignant statement, as sadly the artist was to die a year later of an AIDS related illness.

Mario Dubsky: Xeno Factor is curated by Donald Smith with David Ferry. Works in the exhibition are courtesy of the collections of Anthony Duschell, Mark Golder and David Ferry.