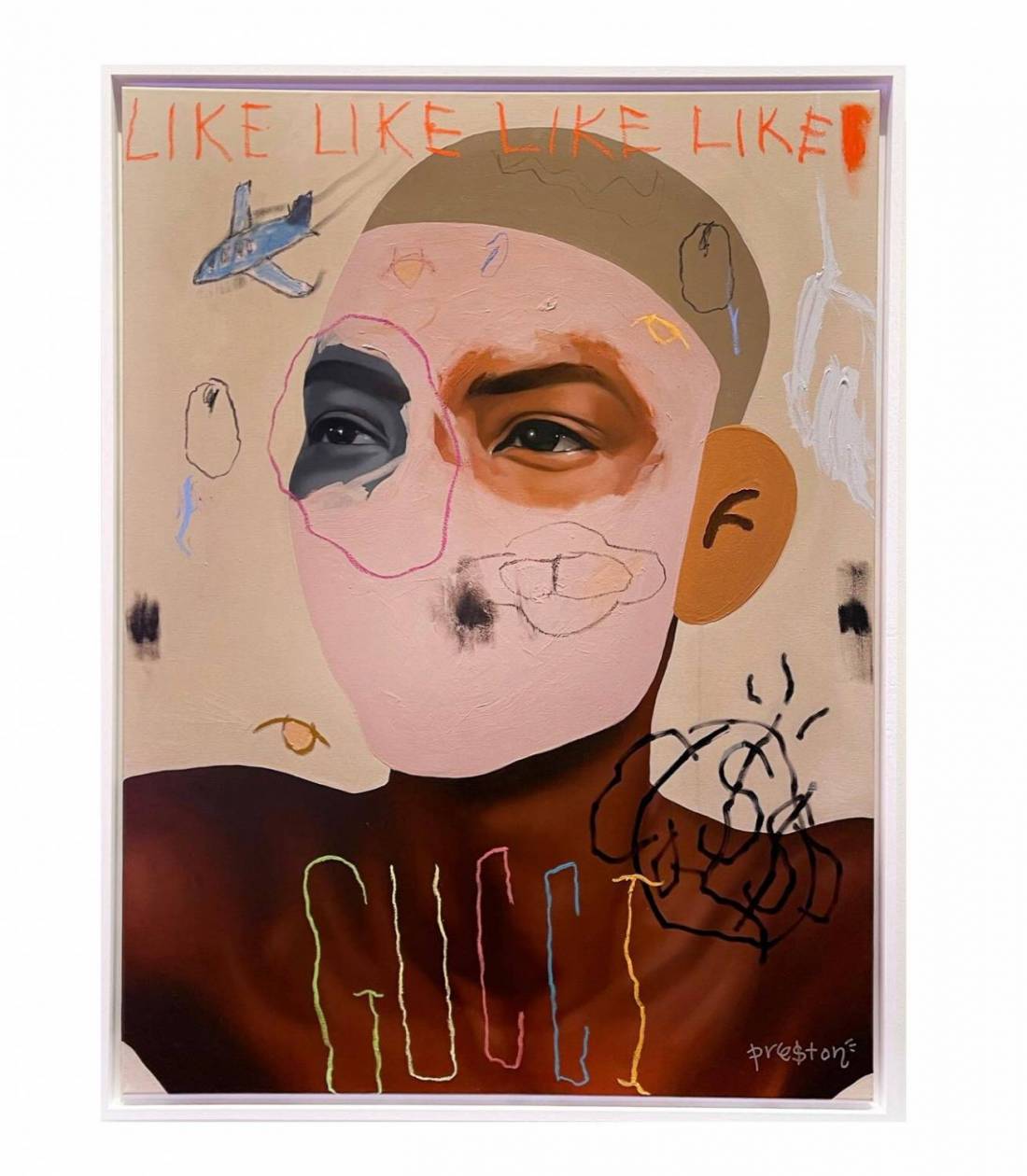 Nathan aka Preston Paperboy  was noted as a Rising Star at Saatchi last year has been featured in Forbes and shows no sign of letting up. Having exhibited in Hong Kong, Atlanta, and Miami, among other cities, he is returning to London to show his new collection titled ‘Lonely Crowded Places’ his first solo show at Reem Gallery Soho, in Ham Yard Village, launching 16th Nov - 3rd Dec.

His work described by the gallery as “Neo Expressionist Portraits” are heavily influenced by street art, pop culture, advertising and the artist’s own experiences with mental illness.

The ‘happy’ face with dollar signs for eyes and a single tear is particularly personal to him – a flipped version of the original smiley face, that refers to his past struggles with depression, and serves as a reminder for him to keep doing what he loves and not be too distracted by material success or failure. Preston believes that art has saved his life. Although not defined by depression it has played a definitive role in determining his newfound career and path.

“Art was an escape, a bit of time alone in my mind, my own kind of therapy. Now it's a career, it's brought in my family... it's less intimate, but it's still an escape. I've found a bit of purpose in my life."

What started off as a therapeutic form of escapism, took on a life of its own and has set him on a new path of discovery and artistic expression and success. Humble honest and open – his artworks betray a sophisticated narrative that is intelligent, witty and aesthetically conscious and at ease within the contemporary digital age. Think Cy Twombly’s neutral and pastel colour palette and paint textures, Basquiat’s playful use of text and chaotic street art motifs, and photo realist facial features taken straight out of a high-end glossy magazine, but that are actually painted meticulously by Preston himself. The carefully composed pieces are almost collage like on first glance, but are made using charcoal, oil pastel and oil paint in block colours and layers, to reveal a carefully curated assembly of facial features, text and repeated personal motifs. The most common motif is his ‘smiler’ symbol and it is also his ‘second signature’.

Having studied architecture at the University of Brighton, Nathan worked as an architect for a decade whilst painting on the side, before becoming a full-time artist. His work can best be described as Neo-expressionist portraiture. The carefully composed works use charcoal, oil pastels and oil paints in layers to reveal facial features, text, and repeated personal motifs to  display a narrative that is influenced by street art, pop culture, and the artist’s own experiences with mental illness. Having exhibited in Hong Kong, Atlanta, and Miami, among other cities he is returning to London to show his new collection titled ‘Lonely crowded place’ at Reem Gallery in Soho.

Born in England, Preston studied architecture at Brighton University, but upon graduating, shifted career-paths to focus his creative energy on pursuing his passion of creating art and developing a personal brand. The distinct “Smiler” logo, featured on all Preston’s work, is a nuanced signature that represents his growth as an artist -- the face’s sad smile and single tear a nod to his past and his ongoing battle with depression -- the $$ eyes a reminder to not let wealth or fame cloud his vision as an artist -- and the three lines overhead a symbol of the light and peace he’s found on his artistic journey.

At the beginning of 2014, founder Zaid Alexander Badda had a burning desire to create a platform for emerging and internationally recognised artists to be showcased in Surrey Heath. In April 2014, the gallery opened its doors in Camberley and can now be found regularly at UK and international art fairs. The name Reem is Arabic for gazelle, which represents Zaid’s family heritage.

In April 2022, Reem Gallery opened its second location in Soho, London. Ham Yard Village, overlooked by the Ham Yard Hotel, is a peaceful oasis tucked behind Piccadilly Circus and within moments of Carnaby Street.

Reem Gallery Soho exhibits a diverse range of contemporary and street art. It is a hub for those who create, and enjoy the creations of others, to have fun, discover new artists and works, to find the pieces that are missing from their homes, and to experience art as a living, breathing, dynamic conversation. It functions not only as a gallery but as a space for collaboration between the creative industries, drawing on the fashion, music, and interior design communities in hosting events, shows, talks, and live art.