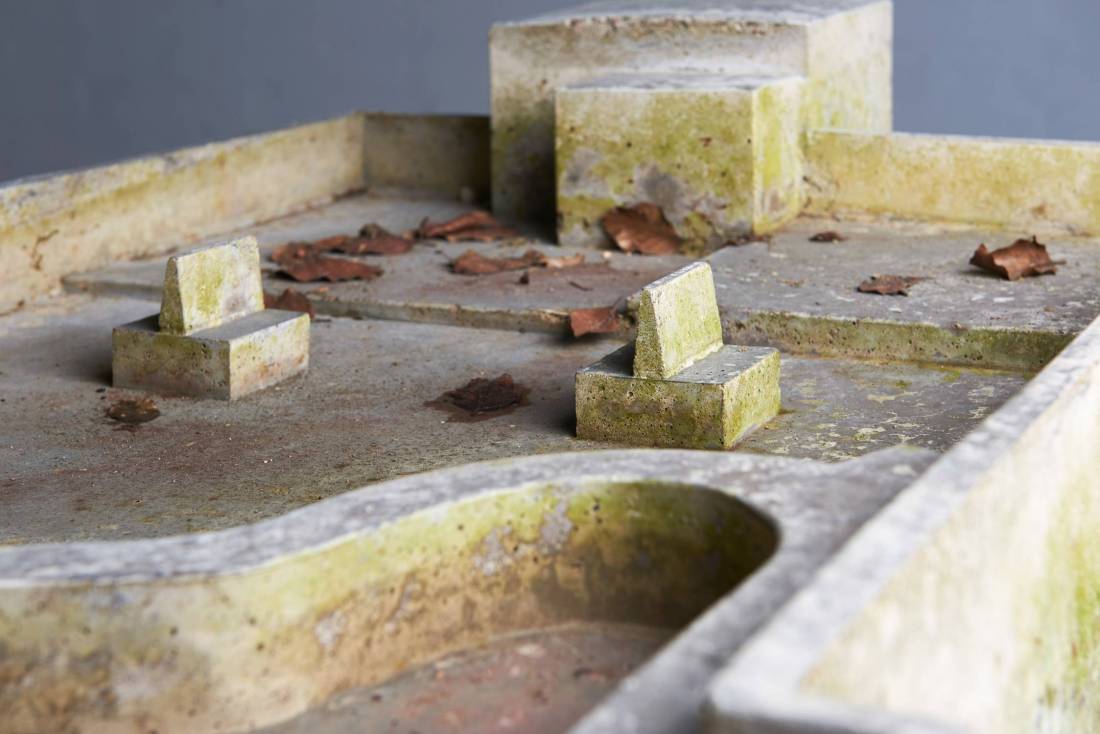 Structures of feeling’ and ‘affective landscapes’ are terms used in cultural studies to describe how emotions shape society and how differing feelings map out a place or community. They could also be used to describe the buildings and environments created through sculpture and painting by the artists Littlewhitehead. A fragment of wall, a landscape painting, a weathered surface are all used to evoke the atmosphere of a place and that atmosphere is then mined for its ideological and social significance.

The places they choose tend to be abandoned: a disused shopping mall, a derelict tower-block, an unoccupied landscape. But abandonment might also be said to be their artistic method, since they remove all signs of life from their work. The artists digitally erase human activity from a landscape, before reproducing it with a programmed airbrush. Graffiti is similarly sprayed, in precise lines impossible for a human hand to make. A rooftop pool, is painstakingly recreated from Google satellite images and photographs, and gets its characterful patina not from the artists, but by being left outside to weather. This process of abandonment helps them get at the meaning of these things, their ideological substructure. An abandoned building becomes like a memorial, an unused object is like a sculpture – real things become an idea or image of themselves, their meaning coming to the fore as their use value recedes. As dystopian as these scenes sound, Littlewhitehead don’t deal in either fantasy or realism, but in a heightened version of experience, showing how systems of representation so thoroughly determine how we move through the world.

Winter, the setting of this first solo exhibition at Public Gallery, certainly seems to fit the stark, delicate beauty of their work, that sense of life’s precious precarity, so nearly not there at all. Winter is also where life gets renewed, as an old order dies off and a new one is ushered in. As much as they remove humanity from the world, they might also be seen as putting it, and feeling back in: their works showing hoods on lamps suggest the absence of a body, as well as the threat of an attacker whose face is covered, but the hood additionally suggests the need for shelter and warmth, basic needs that nod to the fragility of those figures. The sites Littlewhitehead choose, such as dead-malls, California ghost towns, or mid-century tower-blocks, once evoked the promise of prosperity, economic boom or a more egalitarian way of living, but which lost sight of the workers or inhabitants, their needs sacrificed to financial bust and neglect. The artists are equally concerned with the relics of the digital age, websites and blogs abandoned more than a decade ago, and which provide the source material for many of their works. Much of their work is about time – another means of abandonment – as well as what, or who, might come after the fall or emerge from the relics. Perhaps this is why they have turned to winter, and made a snow-scape, even if using fire extinguishers, covering the gallery in white as a final act of purification, killing off dangerous past utopias.