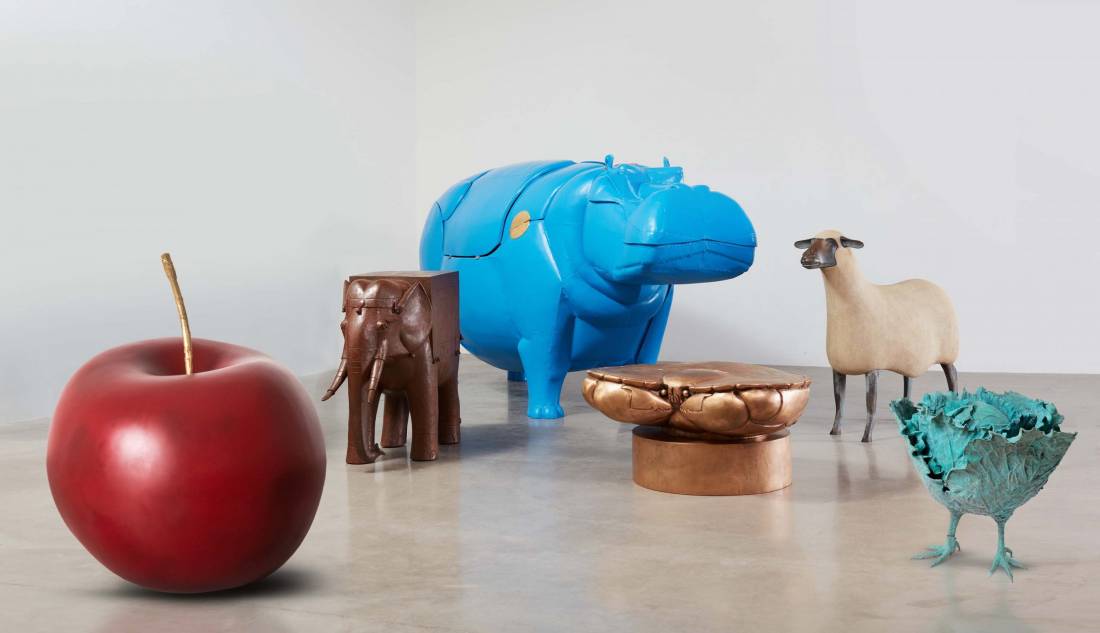 Ben Brown Fine Arts is honoured to announce Les Lalanne: Makers of Dreams, an extensive survey of the work of the late legendary French artistic duo François-Xavier and Claude Lalanne – known collectively as ‘Les Lalanne.’ Choreographed by famed Italian designer Manfredi della Gherardesca, this unprecedented body of over 100 works includes some of the most known pieces to date and will create a Les Lalanne magical menagerie spread across the iconic Mayfair locations, Ben Brown Fine Arts and newly opened Claridge’s ArtSpace. Ben Brown Fine Arts has exhibited the work of Les Lalanne for nearly two decades, yet this will mark their first show at the gallery following Claude’s passing three years ago.

Following the recent Les Lalanne exhibition at the Château de Versailles as well as the major retrospective at the Museé des Arts Décoratifs in 2010, this will be the most extensive grouping of major sculptures by the duo to be shown in a gallery setting. The exhibition will feature Claude's never previously displayed Lit Hibou et 2 Tables de Chevet – a bespoke bed and two side tables commissioned for a collector – and such masterpieces as François-Xavier's ingeniously functional Hippopotame I, a life-size hippopotamus in blue resin which opens up to reveal a full bath suite, alongside the astonishing Hippopotame II (Bar). All four iterations of Claude’s surrealist Choupatte will be presented with its superbly detailed veined cabbage leaves atop whimsical chickens’ feet, with sizes ranging from a tabletop piece to a towering 180cm sculpture. François-Xavier’s Sauterelle Bar, one of two examples, with the other located at Windsor Castle, is one of his masterpieces and will be shown for the first time.

The exhibition showcases both recognizable and rarer works by each artist, touching upon all aspects of their oeuvre, with highlights including: Claude's fanciful gingko tables and chairs, flora-adorned mirrors, electroplated copper and bronze chandeliers, candelabra and lanterns, her widely celebrated Pomme and a silver cutlery service; François-Xavier's iconic Mouton, with examples in both stone and wool and other fantastical bronze bestiaries including a pair of wild boars, a monumental standing bear and a horned wild goat; and the artists' collaborative Singe aux Nénuphars, for which Claude created the tabletop that rests upon the outstretched arms of François-Xavier's monkey.

Della Gherardesca’s exhibition choreography combines the heavenly and the bucolic, constructing a dreamlike equilibrium of Yin and Yang across the two spaces. In both, the nature-based style of Les Lalanne is the leitmotif and several of the welded sculptures ‘float’ with a surreal weightlessness above the clouds. While the flagship gallery takes on the guise of a nocturnal sky, a reverent nod to the late artists, the pure bright white of Claridge’s ArtSpace is a vision of Heaven that alludes to the possibility that their works have entered this realm.

Claridge’s, the legendary hotel in the heart of Mayfair, unveiled a newly created Claridge’s ArtSpace in 2021. This space is accessed by an entrance on the newly restored Claridge’s façade on Brooks Mews, and was designed by John Pawson. Claridge’s invites its long-standing friends and gallerists within the art world to stage rotating exhibitions and shows, and has approachability at its core, with free access to all.

Claude Lalanne (1924 – 2019) and François-Xavier Lalanne (1927 – 2008) have been known as ‘Les Lalanne’ since the 1960s. François-Xavier Lalanne moved to Paris at the age of 18 to study sculpture, drawing and painting at the Académie Julian. After renting a studio near Montparnasse, he met artists Constantin Brâncuși, Max Ernst, Man Ray, Marcel Duchamp and Jean Tinguely. François-Xavier and Claude met in 1952, at which point François-Xavier abandoned painting for sculpture. Claude studied architecture at the École des Beaux-Arts and the École des Arts Décoratifs. The Lalannes’ works are represented in prominent private and public collections around the world including the National Design Museum (New York), Cooper Hewitt Museum (New York), Museé Nationale d’Art Moderne/Centre Georges Pompidou (Paris), Musée des Arts Décoratifs (Paris) and Musée d’Histoire Naturelle (Paris).