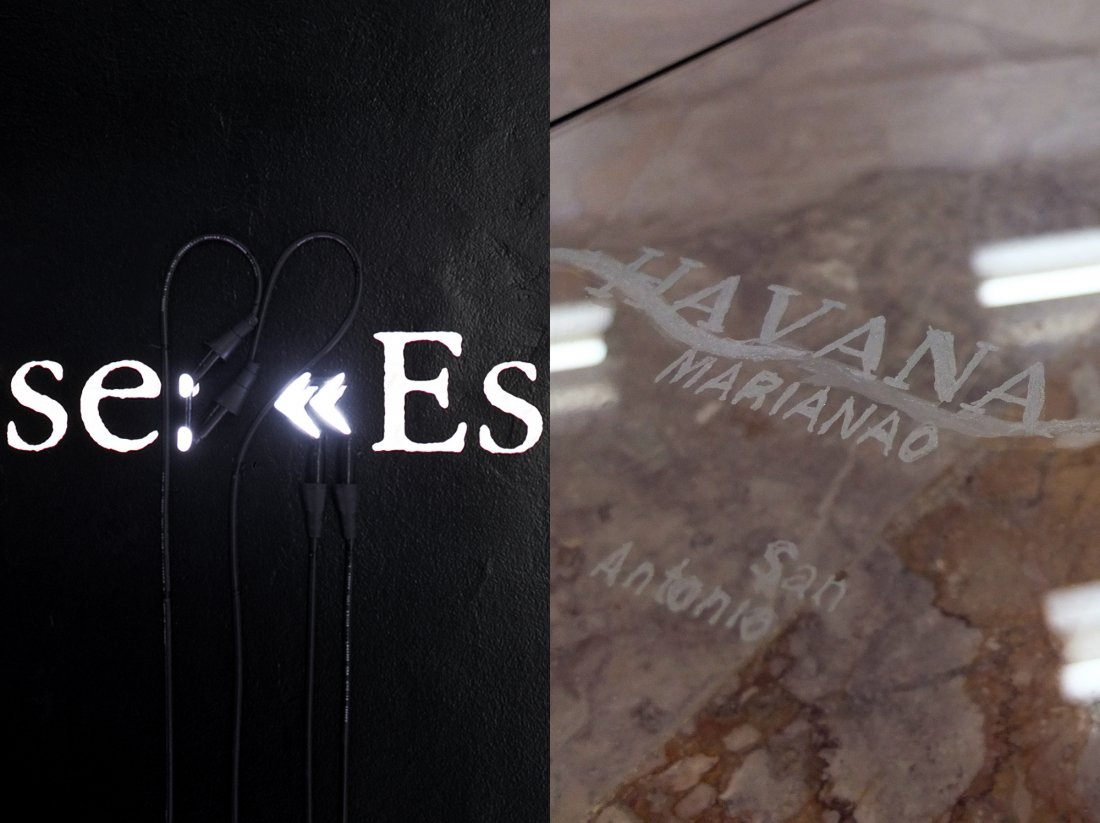 Artists Joseph Kosuth and Seamus Farrell have been invited to conceive two sites-specific works at Chelsea Space. The artists have presented similar versions of these works and installation concept on occasion of the 12th Havana Biennale titled ‘Between The Idea and Experience’ in 2015 at the historic Biblioteca National Jose Marti of Cuba. Both artists engage with the architectural and cultural context of the exhibition space showing how art is itself essentially a questioning process.

Kosuth’s installation entitled ‘(A Grammatical Remark) #11’, 2019 develops from the artist’s interest and use of the philosopher Ludwig Wittgenstein’s theory of language, and a body of works referred to as Kosuth’s Wittgenstein Series begun in 1988. Through the use of an appropriated text from the renown novel Paradise, by Cuban author José Lezama Lima, famously edited by the writer Julio Cortàzar, Kosuth physically and conceptually plays on the notion of ‘punctuation and grammar’ and literally punctuates the space by creating a grammatology of his own. The presentational aspects of the installation include resurfacing the walls with a single line of silkscreened text traversing the architectural context in one continuous line. The text is articulated with white neon components forming all the points of the sentence's punctuation. For Kosuth what begins as a formal device in a shift of meaning ends in a metaphorical investigation of art’s basic agenda.

Farrell’s glass floor piece titled ‘Britain, A Horizon Line Alined’, 2019 is a reflection on the inherent transitory power of delineation, the act of marking perimeters, and defining spaces through line drawing and boundary making; revealing how the gesture of outlining a perimeter is politically charged. The work refers to the idea of a line as a boundary, not just a physical boundary but also the artificial political perimeter that defines the nation in which the work is located. The viewer is invited to question current changes in geo-politics and rethink the cultural impact and value of these shifting perspectives.

Joseph Kosuth is one of the pioneers of Conceptual art and installation art, initiating language based works and appropriation strategies in the 1960s. His work has consistently explored the production and role of language and meaning within art. His more than fifty year inquiry into the relation of language to art has taken the form of installations, museum exhibitions, public commissions and publications throughout Europe, the Americas and Asia.

Seamus Farrell is an artist of Irish and English origin raised in France who began his career while he works as an assistant to a number of established artists. From the age of sixteen he has fabricated, installed and produced site-specific special projects and commissions all over the world. A self-taught artist he has exhibited in numerous international shows, and is part of both public and private collections with a special interest in participating and conceiving projects and workshops off the beaten tracks in Congo Morocco, Vanuatu.