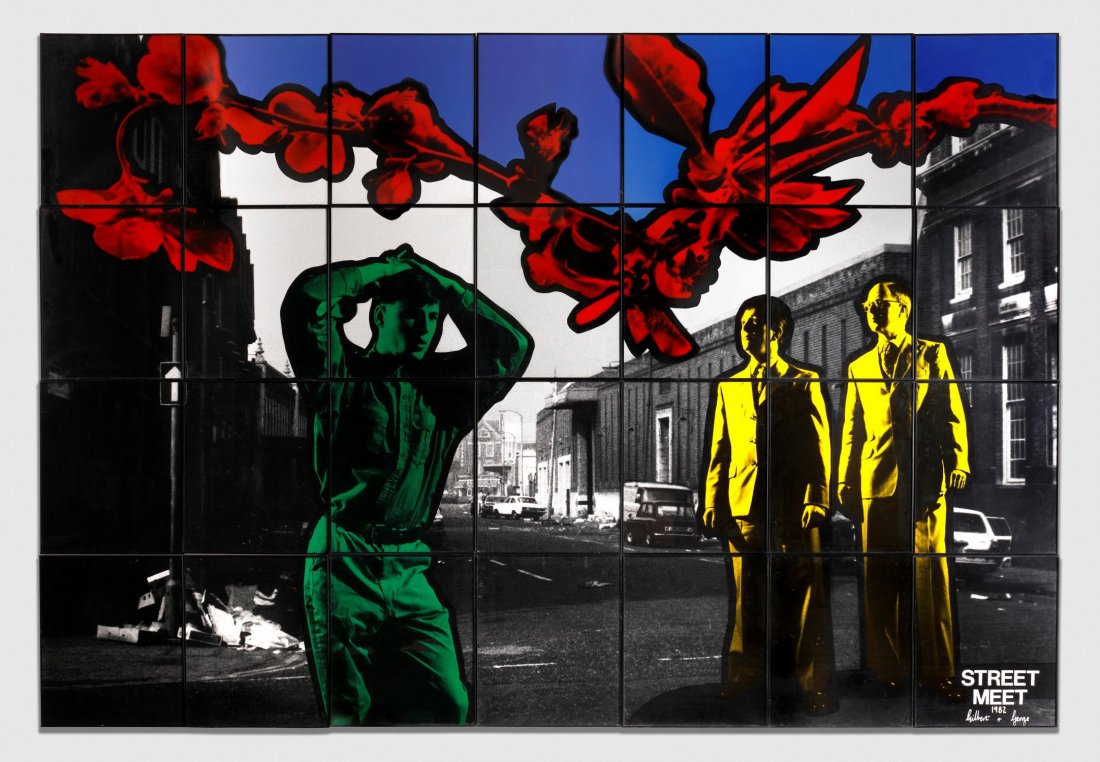 Ben Brown Fine Arts is thrilled to present an extraordinary group of pictures by famed British artists Gilbert & George at the London gallery, exhibited together for the first time from a prominent private collection. After meeting at Saint Martin’s School of Art in London in 1967, Gilbert & George have been creating art together ever since, fully integrating all aspects of their lives into their art, making themselves ‘living sculptures’. They reflect upon their revelation to create together over 50 years ago, “Art and life became one, and we were the messengers of a new vision. At that moment that we decided we are art and life, every conversation with people became art, and still is.”

Gilbert & George’s early art centred around Living Sculptures and evolved into video, drawing, and picture making, typically inserting themselves into their art.  They take an anti-elitist stance to art and embrace the credo “Art for All”, as their art confront issues of social injustices, urban turmoil, politics, sex, religion, racism, patriotism and mortality. The East End of London – where they have been firmly rooted since 1967 and can be seen strolling the streets in their suits as they lead an ascetic lifestyle – serves as a filter and subject matter for much of their art.

Gilbert & George are most renowned for their large-scale artworks, collectively known as “The Pictures”.  In the 1970s they began creating pictures of black and white images, soon arranging them into grid-like structures; by 1974 they incorporated red into their pictures; in the 1980s they introduced other bright colours into their repertoire and adopted a more stylized and graphic appearance in their pictures; and by the beginning of the 21st century fully embraced digital technology in their creativity.

Cock, 1977, is one of 26 of their notorious Dirty Words Pictures, which juxtaposed obscene words found in street graffiti with disconcerting images of urban unrest and inequity, and was part of an important exhibition at the Serpentine Galleries in 2002.  Many works from the series are held in prestigious museum collections such Cunt Scum in Tate, London; Angry in Kröller-Müller Museum, Otterlo; Are You Angry Or Are You Boring? in Stedelijk Van Abbesmuseum, Eindhoven; Cunt in Musée d'Art Moderne de la Ville de Paris; Fuck in Kunstmuseum Wolfsburg; Queer in Museum Boijmans Van Beuningen, Rotterdam and Suck in San Francisco Museum of Modern Art. Toast, 1973, is an equally rare and iconic early artwork, comprised of a zig zag arrangement of slightly blurred black and white images of Gilbert and George drinking, as part of a group of pictures meant to evoke inebriation and explore the role of alcohol in the lives of artists. George commented on this series, “We could see that all the other artists were drinking, but during the day they painted a nice grey square with a yellow line down the side. We thought that was completely fake. Why shouldn't all of life come into your art? The artists drink, but they do sober pictures. So we did drinking sculptures, true to life.”

Street Meet, 1982, demonstrating the riot of colour that erupted in their pictures of the 1980s, comes from a series of images depicting young men in staged, theatrical poses, casting them as ‘living sculptures’. Three, 1984, is a similarly vibrant image of East End youths, poignantly and hauntingly depicted in a classical arrangement. George explained that these portraits were meant to counter negative stereotypes, particularly of an  art  world who “couldn’t handle works of modern art showing young people from neighbourhoods where they themselves didn’t want to live, where they wouldn’t even choose to go.” Gilbert professed, “When using models, we devoted all our power to making them totally beautiful.”

The exhibition also includes four dynamic “Postcard Art” pictures, a body of artwork commenced in the 1970s and revisited again in 2009, in which Gilbert & George assembled postcards in kaleidoscopic grid arrangements, grouped by both subject matter and formal qualities. Most of the postcards used dated from before or shortly after the Great War of 1914 –18; some were in bright colours and others monochrome. New York Times art critic Roberta Smith noted, “Modest yet seminal, the postcard pieces show the artists’ progress from witty nostalgia to seemingly random scrapbook-like arrangements to increasingly striking fusions of form and meaning.” Mother and Black Mare, both 1981, come from a series of images of the Royal Family arranged in the formation of  a  cross,  while London Town and State Coach, both 2009, are comprised of postcards, flyers and telephone box cards arranged in a rectangle with a single card in the centre, referencing a sexual symbol utilized by theosophist C. W. Leadbetter.

We encourage you to explore this trove of seminal art by Gilbert & George, ranging from the 1970s to 2009, that demonstrate the radically pioneering contributions these inimitable artists have made to 20th and 21st century art.