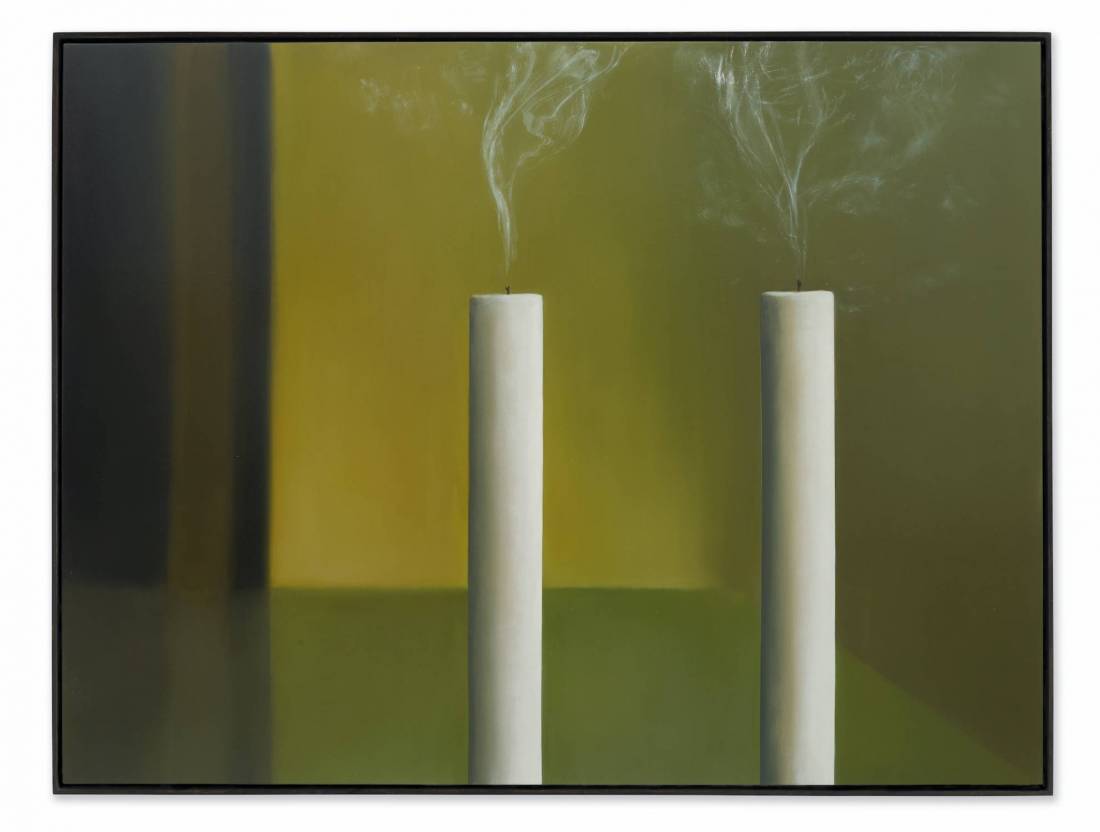 Ben Brown Fine Arts is proud to present Kerze, their fourth solo exhibition of British artist Gavin Turk at the London gallery (4 November – 14 January). The exhibition will unveil a new series of paintings, meticulously rendered still lifes of candles based on Gerhard Richter’s renowned photorealist paintings, though in typical Turk fashion the recognizable imagery is subverted by presenting the candles as recently extinguished, their curls of smoke trailing up the canvas.

Over the last three decades, Turk has relentlessly challenged notions of value, authorship, and identity in his work, often by boldly referencing the work of modern masters and infusing it with his own identity and hand as an artist. His work is at once provocative, disruptive, humorous, mischievous, and erudite, earning him the distinction as one of the most interesting and notorious contemporary British artists today.

‘I first came to notice this painting [Kerze, 1983] in 1988 when it was used on the album cover of Daydream Nation by Sonic Youth. It seemed to extend the mood of the music and got lodged in my subconscious; now more than 30 years later, this feeling of pathos has started to reappear in my work.’ Gavin Turk

The exhibition Kerze, the German word for candle, will bring together 11 paintings based on Richter’s iconic series from the early 1980s of sublimely elegant and disquietingly haunting photorealist paintings of lit candles. Singular and in groupings up to three, arranged in hazily lit interior spaces, the still lifes are framed by the horizontal lines of tabletops and verticality of obscured curtains or windows in the background. In Turk’s faithful iterations, the candles have recently been snuffed out, their delicate threads of waxy smoke illuminating the canvas, altering the narrative, and shifting the symbolism inherent to the subject matter. Turk is fascinated by objects and imagery connected to the psyche and the surreal: candles, pipes, eggs, doors, windows, clouds, and smoke appear throughout his body of work. He consciously incorporates art historical references into his work, layering them mischievously like clues. Turk muses, ‘The candle is a metaphysical symbol, it is a clock, it is a guide, the lit flame is a burning energetic sprite; extinguishing it creates smoke, an afterlife, a holy ghost, a veil, a messenger.’

This body of work oscillates between a romantic or tragic dialogue with history and a puckish rhetoric questioning authenticity and identity. These memento mori works can be approached through a labyrinthine set of interpretations, nodding to the ‘tubism’ of Fernand Léger and graphic juxtapositions of Surrealist René Magritte, to the powerful symbolism evoked by Richter in depicting his candles, a charged motif that has been referenced throughout art history for centuries. The question now building from the narrative of the paintings: Why have the candles gone out?

Gavin Turk was born 1967 in Guildford, England, and attended the Royal College of Art in London. In his 1991 MA exhibition, Cave, he presented a whitewashed studio space containing a single blue heritage plaque commemorating his presence. Though refused a degree, his subsequent notoriety attracted the attention of Charles Saatchi, and he became part of a group known as the 'Young British Artists' (YBAs). He has since been represented by many major galleries throughout the world and is known for pioneering many forms of contemporary British sculpture now taken for granted, including the painted bronze, the waxwork, the recycled art-historical icon, and the use of rubbish in art. His work is included in numerous international collections including the Tate, London; Victoria and Albert Museum (V&A), London; and Museum of Modern Art, New York. Turk lives and works in London.