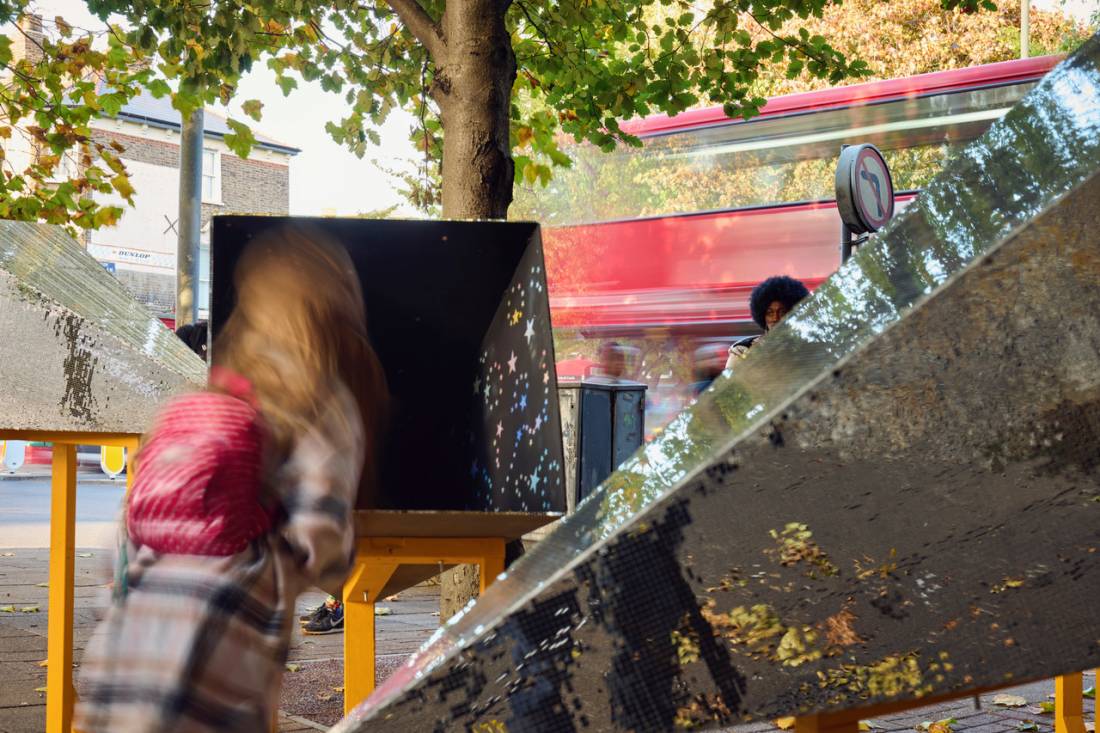 Her latest installation is a pop-up interactive artwork called Deconstructed Disco and will be situated in Clapham Junction from October 26th to October 30th, to coincide with the turning back of the clocks. Commissioned by Wandsworth Council to raise awareness around the development of their new ‘Night-Time Strategy’ which will look at the borough between 6pm and 6am. Inspiration for the artwork came from one of Benihoud’s past passion projects for International Women’s Day Girls of the Light. Using digital projections in alleyways and passages around Tottenham, these previously dark spaces were lit up with empowering animations and images to “highlight an issue that affects how women move around the city”

The artwork is part of a series of projects taking a creative and collaborative approach to communicate the aims of the strategy to local people with whom the council wants to engage, especially young people, the LTGBQ+ community, and night time workers. It has been co-produced with young people attending the Devas and Providence House youth clubs in Clapham Junction and will be based nearby next to the nearby Falcon Road underpass, an area highlighted as somewhere that could feel safer at night.

Over the course of 5 days and 5 nights, through the lens of 5 emotions and 5 discos, Deconstructed Disco will invite passers-by to notice and explore their feelings about the night-time – and in turn get to experience the night-time through the medium of art and audio. From 12 to 5pm every day, the pop-up installation will bring night into the day and from 7 to 8pm the ‘touring’ artwork will project disco animations into dark spaces that don’t feel safe.

“After months of workshops, design iterations, prototyping and then building its so wonderful to have this artwork out in the world. The Deconstructed Disco was inspired by conversations with young people about the night being both fun and fearful. Drawing on these conversations I developed the concept of a smashed-up Disco ball. Each shard is covered in Disco ball mirror on the outside and has a night sky painted on the inside. Hidden in the Deconstructed Disco are speakers playing different audio tracks. Peer inside a shard and you can hear the music. Each track evokes a different emotion. music felt like the perfect way to explore the idea of how the same city can feel so different depending on our situations.”

Hanna is an artist and architect and the founder of Hanna Benihoud Studio. She qualified as an architect in 2014. She began her art career by selling fine art through galleries whilst working full time as an architect. Quickly her artwork began getting larger and spatial in nature and the lines between art and architecture became blurred. After collaborating with Levitt Bernstein to build the City of Stories installation for the London Festival of Architecture in 2016 – Hanna used her interdisciplinary insight to start her own studio in 2017 in Vancouver creating large scale artworks were immersive in nature. After returning to London her work continues to be centred around creating public art that tells stories and engages the community. Using the public realm as the canvas she makes work that is site specific, exploring the boundaries of where architecture ends, and art begins. Her studio continues to create public art in London and abroad. Her work is always committed to telling stories and adding joy to public spaces through art and design.

You can experience the artwork:

Sunday Oct 30, 7pm-8pm: Opposite the back entrance to Sainsburys, Tooting