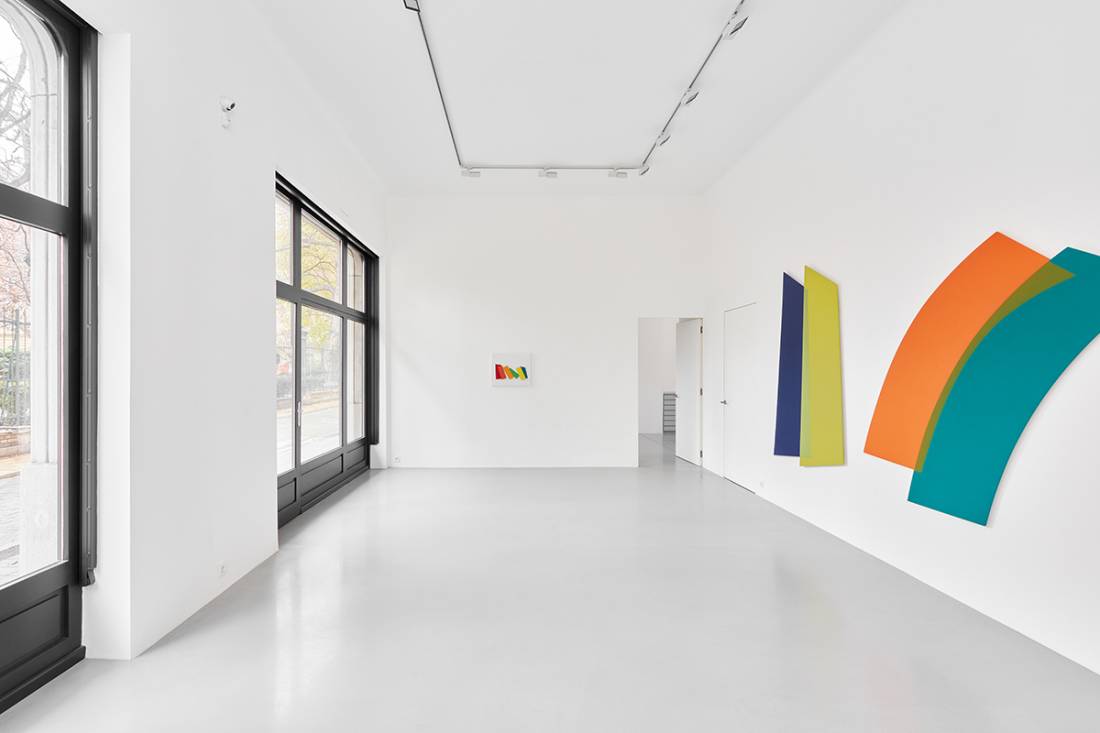 "Disorderly order produced artificially" – formulates a note written in Dóra Maurer's sketchbook next to the plans of her work Stage 5 (2021), of which smaller-scale model is on view at Vintage Galéria’s exhibition alongside the Stage 4 Model (2021) and the large-scale work titled Stage 3(2016). From early on her artistic practice, Dóra Maurer creates works that examine the elements of a self-invented system and studies their internal relations and structure. She describes this experimental method as follows: “... on the basis of some observation, or even an experience, I set up a model situation, which features a number of elements: they may be geometrical forms, or even human characteristics that cannot be easily described verbally. Then I let them go together, making use of an appropriate organising principle. What will be brought about in this way? I observe it again and if possible, mould it further.”

The Stage 4 and Stage 5 Models, which examine the "accidental" juxtaposition of colours and shapes, and the correlations of the order that emerges in this constellation, can also be described as "jam trials" as their inspirations include Caspar David Friedrich's The Sea of Ice (1823-1824, Kunsthalle Hamburg), a painting of which black-and-white reproduction is also included in Maurer's sketchbook. Although all of the presented works are based on the investigation of the interactions of colours and shapes, the two models differ from the large-scale work titled Stage 3 in more than just their size. While the Stage 4 and Stage 5 Models are made up of a series of simple and almost identical geometric shapes – and their sliding on top of each other –, the individual elements of Stage 3 interact more complicatedly with each other: the seemingly transparent colour fields sometimes overlap each other and fold back on themselves, thus they create layers of intermediate colours and the illusion of spatiality. Art historian Dávid Fehér wrote on the Stages series in general: “The word Stage as a title can also be seen as a versatile play on words, with its different meanings. Maurer puts the colour fields on stage, in both the literal and the abstract sense, as they step off the wall and cast their shadow onto it as images of phases of motion. Shakespeare is one of the distant inspirations of these works, as is a photograph taken by the artist of the “found geometry” of some rubbish lying in a landscape, constantly arranged and rearranged into different shapes by the wind, which is indirectly related to the actio naturale works of the artist’s early period.”

Dóra Maurer (1937) visual artist.  Dóra Maurer is a significant figure of international and Hungarian art history. From 1968, as a Hungarian-Austrian dual citizen Maurer fostered the development of the international network of relations of the Hungarian neo-avantgarde. Alongside her activity as an organiser in the art scene, her engagement in art pedagogy is also remarkable. The observation of movement and displacement is a central thought around which Maurer’s work spanning more than five decades is organized across all media. The intention to study and visualize these processes is as present in prints made since the 1960s, and in the photographs and experimental films of the 1970s, as it is in the paintings of recent years. Extending the principles laid down in the Displacements and Quasi Images series in the 1970s, Maurer’s artistic practice shifted increasingly towards painting from the 1980s, when she created a system of different coloured grids, then displaced them step by step resulting planar geometric structures. Later she also utilized similar gridlines in case of her shaped paintings, for instance when executing the Quod Libet series. In the case of the Overlappingsseries, on which she began working in the late 1990s, Maurer curved the lines of the grid already known from previous works, and filled in the areas with different colours, making the overlapping, seemingly immaterial and transparent, but in fact opaque colour fields the central motif of the artworks. From the 1970s, she has regularly shown her works at significant international exhibitions. In recent years, Maurer has taken part in group exhibitions held at Centre Pompidou, Paris (Promises of the Past, 2011), The Art Institute of Chicago (Light Years: Conceptual Art and the Photograph, 1964–1977, 2011), MoMA, New York (Transmissions: Art in Eastern Europe and Latin America 1960 – 1980, 2015) and the Tate Modern, London (Performing for the Camera, 2016), where her solo show was on view from 2019 to 2021. Maurer’s latest retrospective exhibitions were organised at Haus Konstruktiv, Zürich (Minimal Movements, Shifts, 1970-2020, 2020) and at Kunsthalle Bielefeld (So Sehen und Anders Sehen, 2021).

Other events from Vintage Galéria