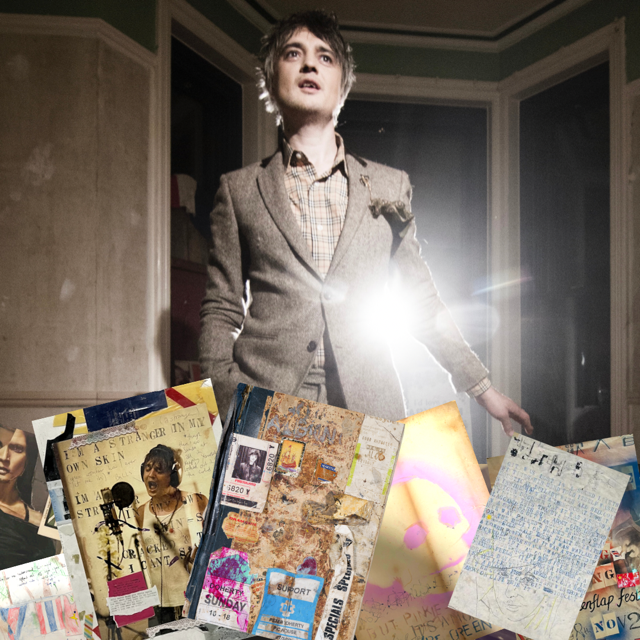 As the frontman of the Libertines and the later founded Babyshambles Peter Doherty (born 1979) has been one of the influential figures of rock music of the past 15 years or so. Though as publicity not as effective, he also has been continuously productive in the genre of fine arts. As early as the late 1990s—when Doherty and Carl Barât shared an apartment—his ideas made their way into music, texts and paintings likewise.

From September 9th to December 31st 2022 the solo exhibition „Contain yourself (seriously)“ featuring artworks by Peter Doherty will present mixed media, collages, original texts and typewriter art together with installation objects from the everyday life of the artist.

The exhibited artworks will provide an insight into different stages—spatial and temporal—of the life of Doherty. Thus the artworks were created i. a. in England, Spain, France and Thailand.

Original texts and manuscripts will be presented in the Salon of the gallery, attended by readings especially recorded by Peter Doherty for this occasion.

Through the Looking Glass -

A Portrait of Peter Doherty as a Visual Artist

This year marks the 20th anniversary of the release of the loud and triumphant debut album of the band „The Libertines“. A band, anarchic, with lyrical song texts that have strong literary references that evoke the utopias of another England „Albion“ as well as electrifying characters, drama and ecstasy in the here and now.

In November 2002, a few hours before the Libertines' first performance in Berlin, I was standing with a friend in a late night shop to buy a few more drinks when the door opened and a tall, pale figure asked us if we could lend him some money for a bottle of rum. When we told him that we needed the money for the concert tickets, he said with a wink that he could put us on the guest list because he was part of the band. That was my first encounter with Peter Doherty when I was still a young student and long since had lost my soul to poetry and rock’n'roll. Years later I started collecting his works and a personal friendship developed over the years.

In addition to his musical career, which includes the Libertines, Babyshambles, Peter Doherty and The Puta Madres as well as musical solo projects, the artist is unfortunately remembered for many only through his media presence in the tabloid press. The media created a character, a golem or doppelganger in the classic sense, that assumed an independent existence and socio-politically was alternately hero, anti-hero, villain or loser. Little is known of his literary work as a poet or as a visual artist.

In 2005, an artwork of Doherty appeared for the first time in the public namely on the cover of a British literary magazine, in which the artist regularly published his own prose and poetry. It was a self-portrait painted in blood, with a quote from Wolfgang Goethe's „Faust I“: „Any small scrap of paper is good. For signature a drop of blood.“ He is referring to the famous scene in which Faust seals the pact with Mephistopheles with his own blood. In Doherty's case, it's his own pact with fame and the self-destruction that comes with it. A pact that he made as an artist, willing to pay a high price for his desire - the gathering of knowledge and experiences beyond the social norms.

Doherty used blood as a stylistic device at the time; not to shock, but because he saw it as a symbol of the self-sacrifice of the artist who pours everything he has within himself into his life, his music and his paintings. In addition to blood, Doherty uses various painting techniques, i. e. collages, acrylic, charcoal and pencil drawings as well as classic pigment colors in his works. At this time he was concentrating thematically on his inner self, his identity, whilst he was suffering from a severe drug addiction and the media reduced him only to that and the woman by his side, the British top model Kate Moss.

In addition to poetry, the visual arts offered Doherty a more physical form of expression, which he as an illustrative painter combined with many other elements. Nostalgic objects such as fragments of the Union Jack, verses from poems or songs, quotes from canonized films or books, fragments of text typed on a typewriter, or objects associated with his drug use. Literary figures such as Arthur Rimbaud, Charles Baudelaire, George Orwell, Samuel Beckett, Oscar Wilde, Antonin Artaud; actors like Edward G. Robinson or the British comedian Tony Hancock. French novelist Maurice Leblanc inspired Doherty's latest exhibition and his recent collaborative album with French musician and producer Frédéric Lo, „The Fantasy Life of Poetry and Crime“.

Due to his passion for the classic genre of film noir, quotes and figures from it can also be found in Doherty's works. Of particular note is the movie „The Man with the Golden Arm“ based on Nelson Algren’s novel, which starred Frank Sinatra and was filmed by Otto Preminger in 1955. The film deals with heroin addiction and the dark side of the American Dream and offers biographical parallels to Doherty's life. Political issues are also processed by the artist; one finds a drawing in a work in which Doherty shows the British national team giving the „Hitler salute“ at the 1936 Olympics in Berlin. The drawing references an existing photo and depicts the „surreal“ reality as Germany and Britain were at war three years later. Logically, musical instruments, collaged backstage passes, concert photos, song sketches and other elements from his musical life also play an important role in the execution of his artworks.

Doherty's visual works form communicating vessels together with his literary and musical creations. None excludes the other and everywhere poetry and magic can arise and connect. In terms of content, Doherty's visual opus functions as an analogue hypertext, a non-linear web of information and cross-references, characterized by ambiguity, intertextuality, associativity and recontextualization. Part of the intertextuality in Doherty's visual oeuvre are the typewritten pages and fragments. They are a mixture of art and literature. Like William S. Burroughs, Doherty uses the typewriter as an illustrative tool. He spontaneously describes events and observations from his everyday life. As with Hunter S. Thompson, delirious subjectivist stories arise as well as songs or novel sketches, ideas for plays and stories in which his alter ego „Ed Belly“ or „Lonely Villain“ play a role.

It has to be mentioned that the artist owns a large collection of typewriters and that typewriters as objects are also being incorporated into his visual works. Together with the typewritten pages and the very popular diaries, the „Books of Albion“, they form the memory of the multi-faceted artist, who is on tour with his bands or solo for most of the year. As a spectator of his artworks, one travels with him through the most diverse countries and adventurous situations.

In creating his art as well as himself Doherty absolutely is in the here and now. Everything is dictated by the emotions of the moment. There is no strategy or planning in the creation of the works, but an urgency and spontaneity that captivates the viewer. The content of his works is of great authenticity, he bluntly opens up his life to the viewer. Through his severe drug addiction, stays in drug rehabilitation centers worldwide, conflicts with the law, imprisonments and contact with the underworld, the artist tells us about a different, a dark, painful and opium-laden world. He discovered and explored this parallel world, gained insights and inspirations that he generously shares with us. His creativity is his attempt to rationalize his experiences and reality and to free himself from the demons.

In 2007 a print of his blood painting „In for a Penny“, which shows him in front of the audience at the Hackney Empire theatre, was produced in Berlin. In the same year, the first exhibition of his artworks from the „Bloodworks“ series took place in London, which was a great success. In this exhibition he presented object art with the montage „Blackbird“, which toys with the eponymic song title of the Beatles as well as Doherty's heroin addiction. A year later the exhibition went to Paris under the name „The Art of Albion“. Also the artist’s diaries, which contain numerous collages and texts, poems or simply notes, were printed in the same year under the title „The Books of Albion“. In 2012, personal items from his collection such as typewriters, flags, antique tobacco jars or furniture could be viewed and purchased alongside new artworks in London in the solo exhibition „On Blood“. These new works included objects created in collaboration with the French painter and writer Alizé Meurrisse. Mentionable are for instance the emblematic cover of the solo album „Grace / Wastelands“ and the cover of the Babyshambles album „Shotter's Nation“, which emulates Henry Walli's painting „The Death of Chatterton“ in a collage. However, the artist created most of the covers of his records and the associated artworks himself. The collage that adorns the cover of Peter Doherty's second solo album „Hamburg Demonstrations“ deserves a special mention. Further exhibitions took place in Paris, Geneva and Barcelona under the title „Flags of the Old Regime“.

Doherty’s oeuvre came to a turning point in 2014 after Doherty met a Buddhist monk during a stay in a rehabilitation clinic in Chiang Mai, Thailand. The monk advised him not to continue painting with blood. Since then he has used a wider range of colors in his works and employed more pictorial elements. Like Andy Warhol, for example, he also uses the stylistic technique of duplicating figures or objects in his works, which he, unlike Warhol, alienates to then reassemble and contrast them in various elaborations. Similar to the works of US artist Jean-Michel Basquiat, Doherty's visual work forms a window into his subconscious that he opens for the viewer and that can only be explored and understood through the viewer's own imagination.

In 2018 Peter Doherty was part of a group exhibition at the janinebeangallery in Berlin, more exhibitions followed. In 2021, works by Doherty could be seen in Paris under the title „The Fantasy Life of Poetry and Crime“. In the same year he exhibited in a prison in Scotland and had inmates draw him. With the exhibition „Contain yourself (seriously)“, a retrospective of his work will be held for the first time in the janinebeangallery in Berlin this year. A long time has passed since Peter Doherty started writing diaries and to paint as a teenager, moved to London and became a celebrated musician, experienced scandals and successes as he has continued to develop artistically to this day. Peter Doherty is now married and free from drug addiction. He lives in Normandy, where he also has a studio. It is definitely worth taking a closer look at his rich and original artistic oeuvre. Whether it is visual arts, music or poetry.

Peter Doherty once answered the question why most of his self-portraits consist of empty silhouettes: It is not a problem of a lack of identity, but rather a lack of knowledge about what really is inside of him. Have fun exploring!