VLADIMIR KOLOSOV THROUGH THE LOOKING GLASS 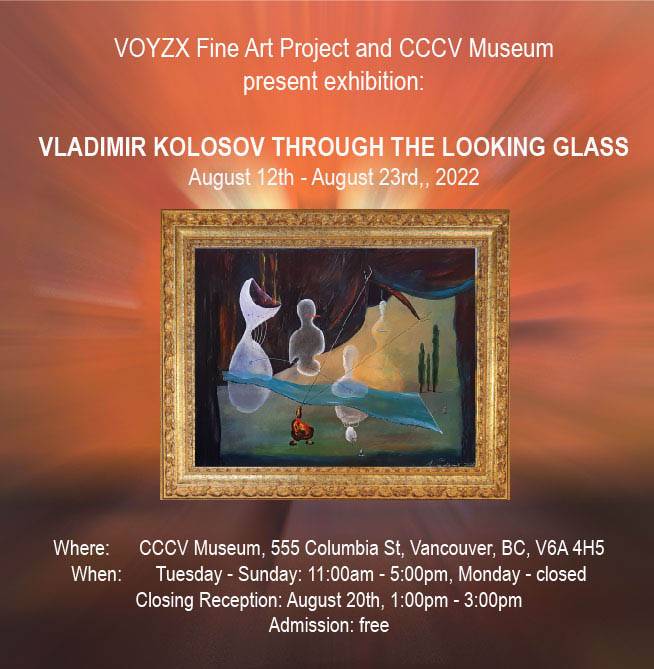 In this exhibition Vladimir invites you to join him in wonderful and enigmatic journey through the looking glass. Live exhibition is held at the Exhibition Hall of CCCV Museum, Vancouver from August 12th till August 23rd. The 3D Virtual Version of this exhibition (reduced q-ty of the artworks) can be visited here: https://www.voyzxart.com/voyzx-virtual until the end of September 2022. (Soundrack "Through the blue" by Brian and Roger Eno).

Artist and polymath Vladimir Kolosov is known as a colourist and for his ability to create works that make the viewer to think. He uses various media and during different periods worked in distinctive styles developing the philosophy that is behind each of his artwork. His artwork is a space where different elements live and interact to each other. There are an environment, energy, movement, relationships, and feelings. Colours play one of the key roles in his art. Thus, the interactions of elements expressed through colours as contradictions and contrasts in composition in his works.

Vladimir considers that the empathy is the foundation of creativity. He sees and understands the outer and inner world of his model, empathizing and portray this model in all its integral diversity. According to Vladimir, empathy relates to memory and imagination both of which have the capacity to bring us back to the past or let us investigate the future.